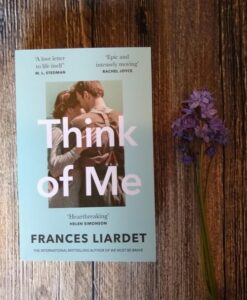 Think of Me tells the story of James Acton, a vicar. One strand is set in 1974 when he feels compelled to move from his comfortable parish to the more remote one of Upton and Barrow End. The other is from the point of view of his late wife, Yvette, whom he met in Eqypt when he was a Hurricane pilot during the war.

Think of Me is told at an unhurried pace and is beautifully and thoughtfully written. Its intricate detail and depiction of trauma, loss, grief and bravery meant it could not be rushed and nor did I want to rush through it. Ultimately it’s the story of James and Yvette’s love for each other and how secrets from the past challenge the love that James recalls for his late wife.
I particularly enjoyed the way he explored his faith and how it was tested more than once throughout his life. Anyone would be tested by what he experienced during the war but it’s put into perspective by one of my favourite characters, Archdeacon Ronald Frobisher, a man James is initially averse to but who undergoes something of a transformation in James’ mind throughout the book.

James’s own war was in the Western Desert, where he fell in love, first with the thrill of being a hurricane pilot and then with Yvette Haddad, the captivating, enigmatic young Alexandrian with a penchant for dangerous driving.

The past has a way of clinging on to us, and even as James embarks on new beginnings, finding friends – and even love – among the people of Upton, the secrets he has held on to so tightly for years threaten to break loose. But Yvette had secrets too, and as James follows a trail that leads him back through the landscape of their marriage, what he discovers about both of them will change everything …

One of the reasons I was drawn to this book was James’s role as a vicar in a small village setting, and as expected this was my favourite of the two narratives. I enjoyed his arrival in Upton, his meeting his new parishioners and the realisations he came to along the way. I hesitate to speak of characters going on a journey but that’s exactly what James does, both physically and emotionally.

When I open my eyes I see a small dark shape at the end of the pew under the window. A piece of cloth, a handkerchief perhaps? No, a woman’s headscarf.
A heartbreaking new novel of love, war and betrayal from the international bestselling author of We Must Be Brave.
The blue is bright, Mediterranean.
James Acton has come to the village of Upton to begin again. As his grief over the death of his wife eases, he hopes to find new purpose as the vicar of this small, Hampshire parish, still emerging from the long shadow of the war.

I’ve only just realised that Liardet’s previous book, We Must Be Brave, features at least a couple of the same characters and I would like to read it and see them from a different angle at some point. I enjoyed this intense and satisfying read.

Think of Me by Frances Liardet was published in hardcover on 12th May. It is also available in eBook and audiobook. My thanks to Matt Clacher of 4th Estate for the proof copy.

Frances Liardet is a child of the children of the Second World War. She has an MA in Creative Writing from the University of East Anglia and studied Arabic at Oxford before traveling to Cairo to work as a translator. She currently lives in Somerset, England, with her husband and daughter, and runs a summer writing session called Bootcamp. We Must Be Brave is her second novel.

I can’t for the life of me remember seeing it before. But all the same it seems familiar. More than familiar. As if I’ve held it in my hands before. As if it’s been next to Yvette’s skin.