Like Loading…
Nikola Scott started out in book publishing and worked as a crime fiction editor in America and England for many years. Turning her back on blood-spattered paperback covers and dead bodies found in woods, she sat down at her kitchen table one day to start her first novel — and hasn’t stopped writing since. Obsessed with history and family stories (‘How exactly did you feel when your parents gave the house to your brother?’) she is well-known – and feared – for digging up dark secrets at dinner parties and turning them into novels.

Once a month, Nikola sends out a popular newsletter about writing, reading, book news, freebies and loads of therapeutic baking. Join in here if you’d love to be a part of it all.
Twitter

This is quite a chunky read and it did take a little settling into the two timelines for me but I was soon into the swing of it and felt quite sad each time I had to leave one character and timeline behind. There’s a lot of sadness in the story, for instance Violet’s failing memory and Frankie’s family woes, but ultimately it’s a story of friendship in the face of adversity and is one for historical fiction and dual timeline fans.

In war-torn London, Violet Etherington is 17 and fed up of being under her mother’s thumb and is also dealing with a family tragedy. She breaks away, calls herself Lily Burns, and joins the Women’s Land Army. Whilst it sounds glamorous, she finds that it is not at all that she expected. In 2004, Violet’s granddaughter, Frankie, is embarking on a new job as journalist at the London Post and she is thrown back into her grandmother’s life after being estranged for ten years. However, Violet is not well and Frankie is learning there’s more to her grandmother than she realised. 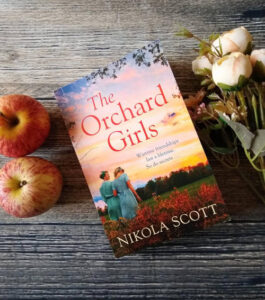 The Orchard Girls is a dual timeline story set in London in 2004 and Somerset in 1940. I love this kind of read where secrets from the past filter down into the present day.

It’s my stop on the blog tour for The Orchard Girls by Nikola Scott. My thanks to Headline for the proof copy of the book and Rachel Gilbey from Rachel’s Random Resources for the place on the tour. 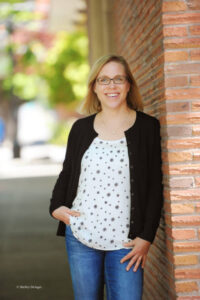 This is an intriguing story of life at war. There seems a safety to being hidden away in the orchards of Somerset so when the conflict does find the Land Girls it’s a shock. I loved the camaraderie between all the women, all different ages and backgrounds, yet thrust together to live and work. It takes Lily/Violet a while to settle in and gain the trust of the other women but she soon found her feet and I was really rooting for her and enjoying it when her sometimes hidden feisty character came through.
Photo Credit: Shelley DeJager
Somerset, 1940. When seventeen-year-old Violet’s life is ripped apart by the London Blitz, she runs away to join the Women’s Land Army, wanting nothing more than to leave her grief behind. But as well as the terror of enemy air raids, the land girls at Winterbourne Orchards face a powerful enemy closer to home. One terrible night, their courage will be put to the test – and the truth of what happened must be kept hidden, forever . . . 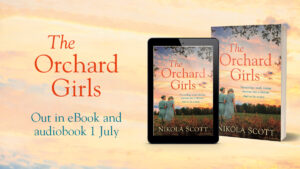 London, 2004. Frankie didn’t always have it easy. Growing up motherless, she was raised by her grandmother, who loved her – and betrayed her. For years, the rift between them seemed irreparable. But when their paths suddenly cross again, Frankie is shocked to realise that her grandmother is slowly losing control of her memory. There is a darkness in her past that won’t stay buried – secrets going back to wartime that may have a devastating effect on Frankie’s own life.
Social Media Links –

There are actually a lot of similarities between Violet and Frankie’s characters and experiences. They both work in positions where they are up against people who want them to fail. I really enjoyed the detail of the orchards and the life of a Land Girl, especially when contrasted with Frankie’s experiences as a journalist, in a cutthroat environment where it’s every man (or woman) for themselves).

Her first two books, My Mother’s Shadow and Summer of Secrets, have both been international bestsellers and were translated widely around the world. Nikola lives in Frankfurt with her husband and two boys (and a kitchen table).