Or is it true that a broken heart can never be a blank canvas?
A few other characters stood out and deserve a mention too. Jim’s friend and employer before he moved north was Charles, who owned a bookshop. He really was a true friend to Jim. Jim’s father-in-law, Edgar, was a big-hearted man who welcomed Jim into the family and was almost as devastated as Jim when the marriage broke down. Much of the damage done to the relationship was caused by Flick’s mother Penelope and she was definitely a character I loved to hate. I couldn’t understand how such an intelligent young woman as Flick could be so influenced by her mother.
Meanwhile, Jim is settling back into life as a single man in the beautiful Highland village of Shieldaig, when an unexpected visitor brings painful news. A letter from beyond the grave leads him to do something he never imagined and takes him on a journey he didn’t anticipate.
Getting snowed in at a cosy cottage in the Scottish Highlands doesn’t sound like too much of a hardship does it? Getting snowed in with a handsome, kind and sensitive Scotsman sounds even better. But maybe not when the handsome Scotsman is your ex-husband – awkward! Perhaps rather unusually for a romantic story, the focus of the book, initially at least, is a wronged husband. Jim is heartbroken and bewildered when his wife Flick announces she wants a divorce. They had been soulmates since they met at Oxford University and he thought they’d be together forever. Fast forward a few years and Jim is living in the Highlands when Flick pays a surprise visit with some sad news. And then she gets snowed in…
Finally succumbing to maternal pressure, Flick falls into the high-flying career her mother believed she was destined for.
It was love at first sight when talented art student Felicity “Flick” Johnston-Hart and Jim MacDuff’s worlds collided at Oxford University.
Near the beginning of this year, I read Dreaming Under an Island Skye by Lisa Hobman and absolutely loved it. I couldn’t fit in her book Under A Sicilian Sky earlier this year but was determined not to miss out on Starting Over at Sunset Cottage. Thanks to Rachel at Rachel’s Random Resources for the opportunity to take part in the blogtour and to publishers Boldwood for providing an e-copy for review from Netgalley.
About the Book
About the Author
Although for the main part this is definitely a romantic story, the author rather unexpectedly introduces a dramatic element to the book at one point. This certainly added a frisson of danger and changed the tone of the book quite a bit. There were more than a few moments when I genuinely had no idea just what was going to happen.
This book was previously published as Through the Glass.
Do you love someone enough to let them go?
Instagram https://www.instagram.com/lisahobmanauthor/
Social Media Links
Facebook https://www.facebook.com/LisaJHobmanAuthor/
However, she soon realises life without Jim isn’t all she’d hoped, and that some decisions, once made, cannot be undone.
Newsletter Sign Up Link https://mailchi.mp/a50c456447a3/lisahobman
What I really enjoyed about this book was the way the story moved back and forwards in time as we find out about Jim and Flick’s relationship from when they met as students, throughout their relationship and eventually up to their present situation. From feeling complete animosity to Flick at first for the hurt she had caused Jim, as I got to know her my feelings switched from sympathy to annoyance and back again several times. The author was excellent at manipulating my feelings! By contrast, I thought Jim was just wonderful right from the start.

Purchase Link – Starting Over at Sunset Cottage
Bookbub profile https://www.bookbub.com/authors/lisa-j-hobman
Lisa Hobman has written many brilliantly reviewed women’s fiction titles – the first of which was shortlisted by the RNA for their debut novel award. In 2012 Lisa relocated her family from Yorkshire to a village in Scotland and this beautiful backdrop now inspires her uplifting and romantic stories.
Twitter https://twitter.com/LisaJHobmanAuth
Starting Over at Sunset Cottage is a lovely second chance, will-they-won’t-they romance and I was far from certain how the relationship would end. I so enjoyed the snowy Scottish village setting with its real sense of community. Jim and Flick’s story is a captivating one which is told so well through the author’s engaging style of writing. As to whether these two are destined to be soulmates or become just good friends, well you’ll need to get yourself a copy of this lovely book to find out.
However, after years of blissful marriage, everything crashes down when their marriage comes to a painful and abrupt end, thanks to Flick’s interfering mother Penelope.
Can either of them heal and truly move on? 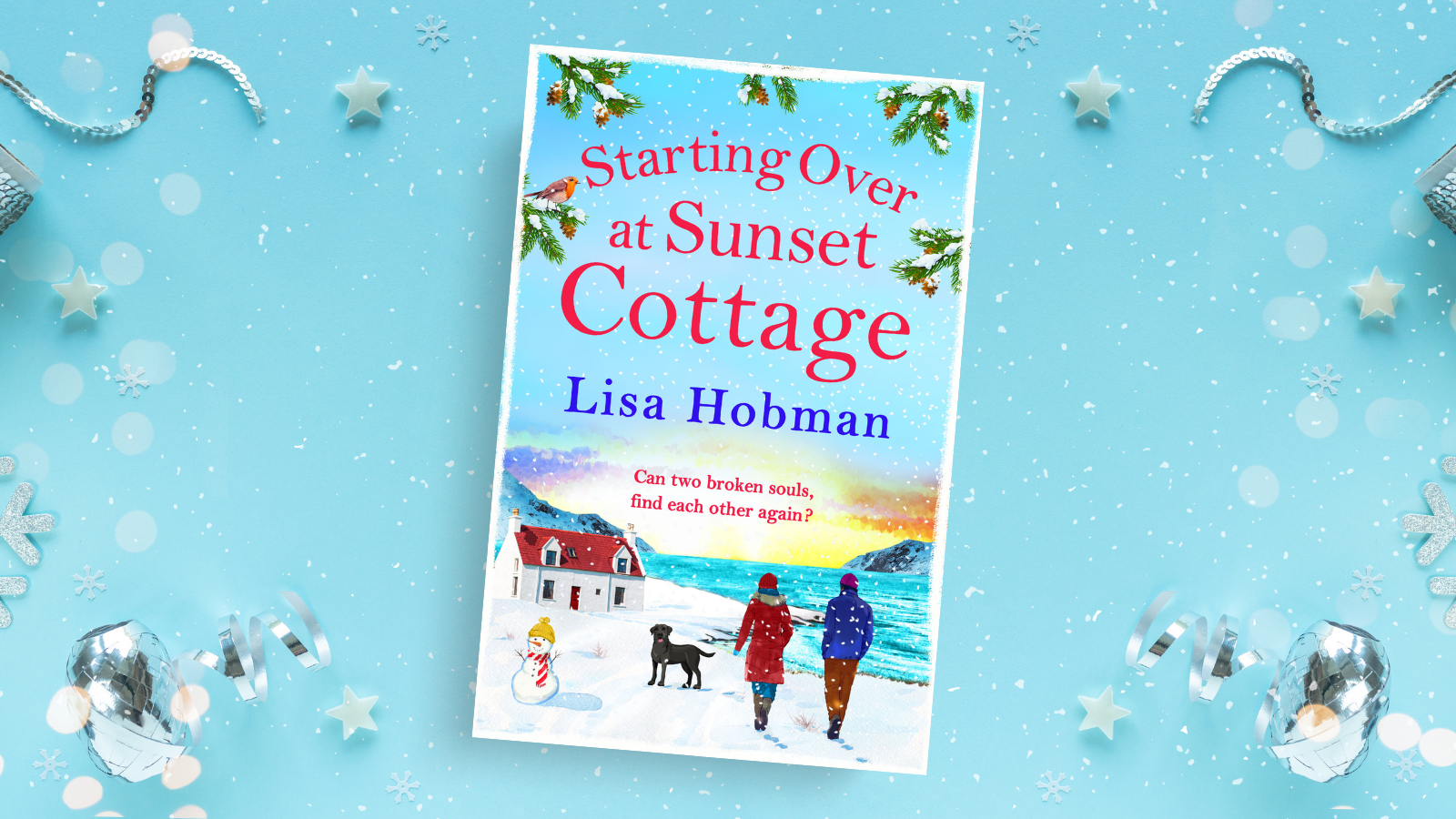