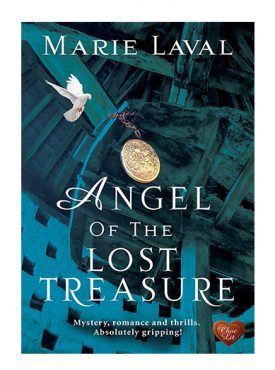 This was a turbulent time in French history with danger lurking it seemed round every corner and it made for a gripping read. The author really brought the era to life and created a sense of ever-present fear.
From the back of the book
Marie-Ange is no damsel in distress, as she proves several times when she is in danger. I really liked her feistiness at a time when a lady was supposed to be somewhat delicate. And although Capitaine Sinclair initially seems to be no gentleman when they first meet, he turns out to be a bit of a swoon-worthy hero. I so enjoyed the slow burn romance between them. And then there was the added mystery of just what had happened to Marie-Ange’s husband adding a few complications. Was he really dead?
When young widow, Marie-Ange Norton is invited to Beauregard in France by the mysterious Monsieur Malleval to collect an inheritance, she has no choice but to accept.
About the Author
Thanks to Liz at ChocLit for my review copy of this book. Angel of the Lost Treasure is available in ebook and audiobook formats, and also paperback through Amazon. You will find buying options for various retailers on the ChocLit website here: Angel of the Lost Treasure
Originally from Lyon in France, Marie now lives in Lancashire with her family. She works full-time as a modern languages teacher, and in her spare times loves writing romance and dreaming about romantic heroes. She writes both historical and contemporary romance, and her historical romance The Lion’s Embrace won the Gold Medal at the Global eBook Awards 2015 (category Historical Romance). She is a member of the Romantic Novelists Association and the Society of Authors. Her native France, as well as her passion for history and research, very much influences her writing, and all her novels have what she likes to call ‘a French twist’!
But when she embarks on the voyage with her fiery-tempered travelling companion Capitaine Hugo Saintclair, little does she know what waits for her across the sea in turbulent nineteenth-century France on the eve of Napoleon’s return from exile. When she arrives, she is taken aback by Malleval’s fascination with her family – seemingly inspired by his belief they are connected to a sacred relic he’s read about in coded manuscripts by the Knights Templar.
Marie-Ange is a young widow whose husband Christopher was lost at sea during the Napoleonic Wars. Her mother was French and when she is invited to France by a relative, Monsieur Malleval, to claim an inheritance, she is escorted there by handsome though gruff Capitaine Hugo Saintclair. Once she arrives, she discovers that it’s not quite as straightforward as it seems and that she may have been lured to France under false pretences. Mr Malleval is convinced she knows about some hidden treasure referred to in some ancient documents by the Knights Templar, treasure he is desperate to get his hands on.
As it becomes clear that Malleval’s obsession has driven him to madness, Marie-Ange is horrified to realise she is more the man’s prisoner than his guest. Not only that, but Hugo is the only person who might be able to help her, and he could represent a different kind of danger …
Danger, drama, suspense and romance are combined so well, making this an enthralling story. This would make a fantastic tv costume drama! Now, who to cast as the Capitaine…?
An ancient secret hidden within a mother’s song …

Something a bit different from me today but a book I enjoyed very much. Angel of the Lost Treasure is a historical romance set in 19th century France with links to the Knights Templar, who you may know of from the Da Vinci Code. It’s publication day for this one so wishing the author a very happy publication day! 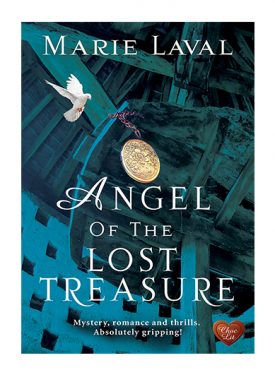