DS Laura O’Neil is running on empty after nights dealing with her teething toddler. But Laura is driving the hunt for Scarlett and knows that every minute counts.

Dylan’s a ‘cuckoo’, dealing drugs on the county line, moving from nest to nest, picking out people who daren’t say no. Keeping his head down, one step ahead of the law. So far. But now everything’s falling apart.

A missing schoolgirl, a middle-aged recluse, an exploited teenager. Lives thrown into chaos and set on collision course. With the police in hot pursuit.

A race against time, played out in the brooding wilderness, the limestone gorges and gritstone edges of the Peak District. Themes of escape and entrapment, of shifting loyalties and new alliances, of violence, fear and love, resilience, kindness and hope.
Scarlett is dancing in the school talent show tomorrow. Nana, who Scarlett lives with since Mum died, reckons Scarlett will be on Strictly at this rate. Except Scarlett doesn’t make it home from school. She’s abducted by a man she never imagined she’d see again. A man on the police’s most wanted list. Her dad. 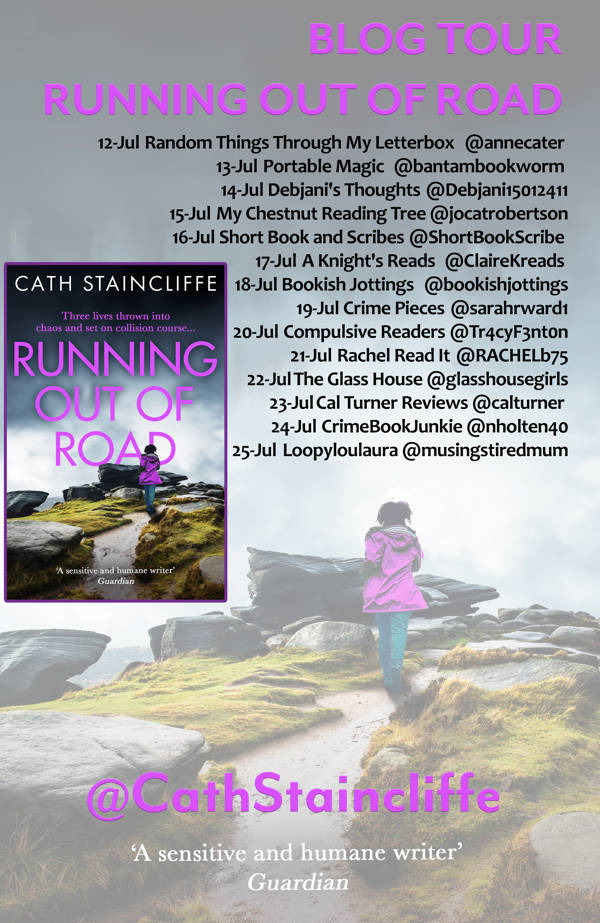 There are lots of twists and turns and I kept wondering what else could happen. It all takes place in hours, rather than days, and it really is a story jam-packed with lots of ups and downs and tense situations. This is such a great read, one that covers so many issues and kept me interested in getting to the outcome.

There are several strands to this story and all become tangled together in an unexpected way. There’s Ron, a quiet house/pet sitter, minding his own business until one small action leads destruction to his door. Then there’s Dylan, a drug dealer fleeing an incident and ending up involved with Scarlett, an 11 year old who has been kidnapped by her father, who she hasn’t seen for years. DS Laura O’Neil is on the hunt for Scarlett and also finds herself in the middle of a number of messy situations with the unexpected assistance of her new colleague, PC Ahmed Ali.

Ron has made a living as a house and pet sitter since quitting his career on the front line in the fire service. He’s currently looking after a place deep in the Derbyshire Peaks. The solitude suits him. And managing animals is so much simpler than coping with other people.

I think the strongest part of this book is the plot and how it all comes together. It’s really clever how a set of misunderstandings makes everything so much more complicated. Setting it in the brooding and at times desolate Peak District with weather conditions playing their own part makes for a quite dark backdrop and yet this is such an easy book to read and to get absorbed in.

It’s my stop on the blog tour for Running Out of Road by Cath Staincliffe and I’m sharing my thoughts on this excellent crime novel. Thank you to the publishers, Constable, for the review copy of the book and Tracy Fenton of Compulsive Readers for the place on the tour. 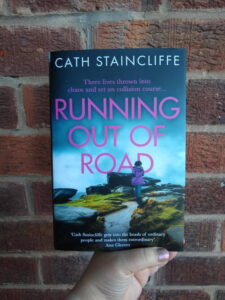 I always enjoy a Cath Staincliffe book although for some reason it’s been far too long since I read one. I really enjoyed Running Out of Road and found it to be a tightly plotted crime story with fascinating characters.

Cath Staincliffe is a best-selling, award-winning novelist, radio playwright and the creator of ITV’s hit series, Blue Murder, starring Caroline Quentin as DCI Janine Lewis. Cath’s books have been short-listed for the British Crime Writers Association best first novel award, for the Dagger in the Library twice and twice for the Short Story Dagger, winning in 2012. She was a winner of the WGGB Best Radio Drama Award in 2019. Cath’s Sal Kilkenny private eye series features a single-parent sleuth working the mean streets of Manchester. Her debut Looking For Trouble was serialised on Woman’s Hour on BBC Radio 4. Trio, a stand-alone novel moved away from crime to explore adoption and growing up in the 1960s, informed by Cath’s own experience. Letters To My Daughter’s Killer was selected for Specsavers Crime Thriller Book Club in 2014 and featured on ITV3’s Crime Thriller Club. Cath also writes the Scott & Bailey novels based on the popular UK TV series. Cath created the probate detective series Legacy for BBC Radio 4 and guest writes on the Stone police drama. Her recent stand-alone novels examine the impact of crime on ordinary families. The Girl in the Green Dress was inspired by her experience as the parent of a transgender child. Cath’s latest book, Quiet Acts of Violence, sees detective duo DI Donna Bell and DC Jade Bradshaw investigating the death of a newborn baby and launching a hunt for her missing mother. Cath is one of the founding members of Murder Squad – a group of Northern crime writers who give readings, talks and signings around the country. Cath was born in Bradford, Yorkshire, UK and now lives in Manchester, Lancashire with her family. You can follow her on Twitter, @CathStaincliffe, where she hangs about when she should be busy writing!