Rachel’s Holiday is THE most wonderful book. It’s full of humour that had me laughing out loud on so many occasions. Keyes has such a dry and witty way of describing people and situations that just chimed with me. But there is a serious story underneath Rachel’s surface, that of addiction and the effects not only on the addict but on those around them. Rachel and her fellow ‘inmates’ at The Cloisters go on such a journey, both physical and emotional, that it’s impossible not to feel for them. I was so moved and at one point tears sprang into my eyes as I realised there was more to one of the characters than I (and Rachel) had at first realised.
But her sensible older sister showing up and sending her off to actual rehab wasn’t quite part of her plan.

But will hitting rock bottom help Rachel learn to love herself, at last?

She’s only agreed to her incarceration because she’s heard that rehab is wall-to-wall jacuzzis, spa treatments and celebrities going cold turkey – plus it’s about time she had a holiday.

Saying goodbye to fun and freedom will be hard – and losing the man who might just be the love of her life will be even harder.
So is it still my favourite Keyes? Yes! Rachel’s Holiday is superb in every way. It’s emotional, it’s sexy, it’s hilarious, it’s thought-provoking and thoughtful, and it’s real. I LOVED it! 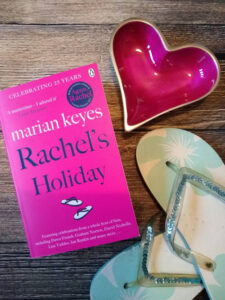 I’ve been trying to remember when I first read Rachel’s Holiday and I’ve come to the conclusion that it must have been when it was first published in 1997 as I clearly remember looking forward to Marian Keyes’ next book, Last Chance Saloon, being published because I had loved Rachel’s Holiday so much. In fact, I’ve always thought  that this book was my favourite Keyes. Did I still think that after my reread? Well, read on.

At 600 pages you might imagine the story would dip in the middle, or not keep the reader’s attention. Wrong! I was fully embroiled in Rachel’s story from beginning to end and if it had been longer I would have been rejoicing. I’m certainly thrilled to know that we’ll be hearing more from Rachel in Again Rachel, out February 2022.

She’s been living it up in New York City, spending her nights talking her way into glamorous parties before heading home in the early hours to her adoring boyfriend, Luke.
Meet Rachel Walsh.
Again Rachel, the sequel to her ground-breaking novel Rachel’s Holiday, will be Marian’s fifteenth novel.

Rachel Walsh is 27 and living in New York, away from her family in her native Ireland. You might think this means she has her life together but in fact her life is a mess, lurching from drug to drug, drink to drink. Rachel is a bit of a catastrophe but a fun-loving, somewhat likeable one. She shares a flat with her best friend, Brigit, and has a boyfriend who gets her hot under the collar but one drug-fuelled night too many sees her returning to Ireland to enter The Cloisters, a rehab centre that Rachel, in her haze, expects to be full of Jacuzzis, saunas and swimming pools.

The 25th anniversary edition includes a new foreword with celebrations from some of Marian’s many fans, including Dawn French, Graham Norton and David Nicholls who reflect on the significance of Rachel’s Holiday since its first publication and what it continues to mean to them today. 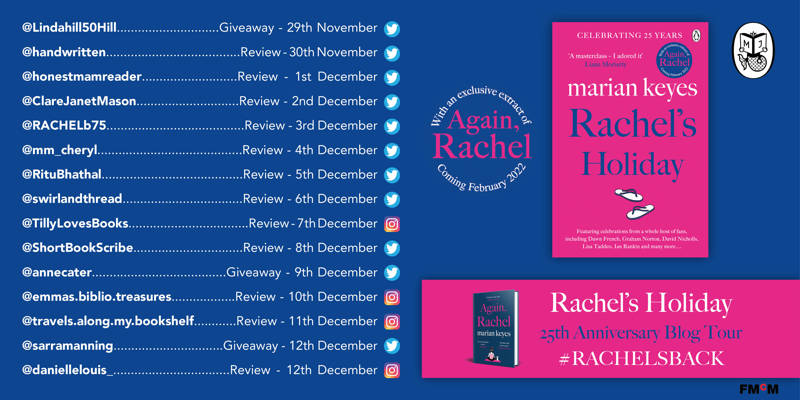 It’s my stop on the blog tour for Rachel’s Holiday by Marian Keyes. It’s 25 years since Rachel arrived on the literary scene and a special anniversary edition will be published tomorrow.

As a beloved author herself, Marian is a passionate champion of storytellers everywhere, playing an active role in encouraging new voices. She has been the chair of judges for the Comedy Women in Print prize, a sponsor of the Curtis Brown Creative Marian Keyes scholarship, and most recently ran her own hugely popular Instagram Live series bringing free creative writing courses to thousands of viewers. Marian also uses her position to raise some of the most challenging issues of our time, including addiction, immigration, depression, domestic violence and the Repeal the Eighth campaign.
Both critically acclaimed and commercially unstoppable, Marian’s fourteenth novel Grown Ups went straight to No.1 in hardback and paperback in four global territories: UK, Australia, New Zealand, South Africa, and was shortlisted for the British Book Awards Audiobook of the Year. In addition to her novels, Marian has written two collections of journalism, as well as been the star of the second series of her hit show Between Ourselves aired on BBC Radio 4 at the start of 2021.
Marian is based in Dun Laoghaire, Dublin.
My thanks to Rhiannon Morris at FMcM Associates for giving me the opportunity to reread this fabulous book, for asking me to be on the tour and for sending a copy of the book for review purposes.
Like Loading…

Marian Keyes is a phenomenon. The multi-million copy, internationally bestselling author of some of the most widely loved, genre-defying novels of the past thirty years – such as Rachel’s Holiday, Anybody Out There and Grown Ups – has millions of fans around the world. They are irresistibly drawn by her warmth and wit, fearless honesty, relatable characters and relationships, and sheer storytelling magic. Not only has Marian inspired and entertained countless readers, but also the next generation of writers too.