Dot Watson has lost her way.

Today’s review is of Lost Property by Helen Paris which is a gorgeous read. My thanks to Hayley Barnes from Doubleday for the proof copy of the book for review purposes.
Helen Paris worked in the performing arts for two decades, touring internationally with her London-based theatre company Curious. After several years living in San Francisco and working as a theatre professor at Stanford University, she returned to the UK to focus on writing fiction. 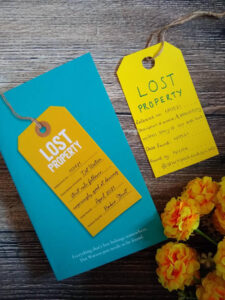 Lost Property was a book with a setting that immediately appealed to me. Dot Watson works at the London Transport Lost Property office and I had a feeling that a story in which lost items were reunited with their owners was going to be my kind of quirky yet heart-wrenching sort of read.

This is such a beautifully written book, really thoughtful, digging right down into the human psyche and the human soul. Everything Dot thought she knew is challenged and she goes on quite a journey of discovery throughout the course of the story. I thought it was so clever how the author used the metaphor of lost property and applied it to Dot and her family. The characterisations are so strong they bounced off the page and came alive for me. I lived through Dot’s heartbreak as she gradually lost her mother to dementia and her frustration at her sister’s busybody behaviour. I rejoiced on the odd occasion she let herself go, cried when she couldn’t cope any longer and giggled at some of the little gems she came out with.
As part of her research for a performance called ‘Lost & Found’, Paris shadowed employees in the Baker Street Lost Property office for a week, an experience that sparked her imagination and inspired this novel.

Twelve years ago her life veered off course, and the guilt over what happened still haunts her. Before then she was living in Paris, forging an exciting career; now her time is spent visiting her mother’s care home, fielding interfering calls from her sister and working at the London Transport Lost Property office, diligently cataloguing items as misplaced as herself.

Of course, that is not all the book consists of. Dot herself is lost, but finding her true self again is going to be rather harder than filling in a form and attaching a Dijon mustard coloured label to her wrist. As the story unfolds more is revealed about Dot’s past and why she’s working in lost property and not travelling the world or working as an interpreter as she had planned. The arrival of Mr Appleby, looking for a holdall containing a purse that belonged to his late wife, is the catalyst for change that Dot needs, even if she doesn’t yet know it.
But when elderly Mr Appleby arrives in search of his late wife’s purse, his grief stirs something in Dot. Determined to help, she sets off on a mission – one that could start to heal Dot’s own loss and let her find where she belongs once more…

Reading Lost Property is a bit like looking out to sea. On the surface it is an easy to read story of a woman losing her direction and trying to find her way back to herself. Underneath the surface, however, is a roiling and nuanced mass of emotion, a multi-faceted and multi-layered story. I think the author has done an amazing job with this evocative book. Life for Dot has its very dark moments but it’s ultimately a truly uplifting read and I loved it.