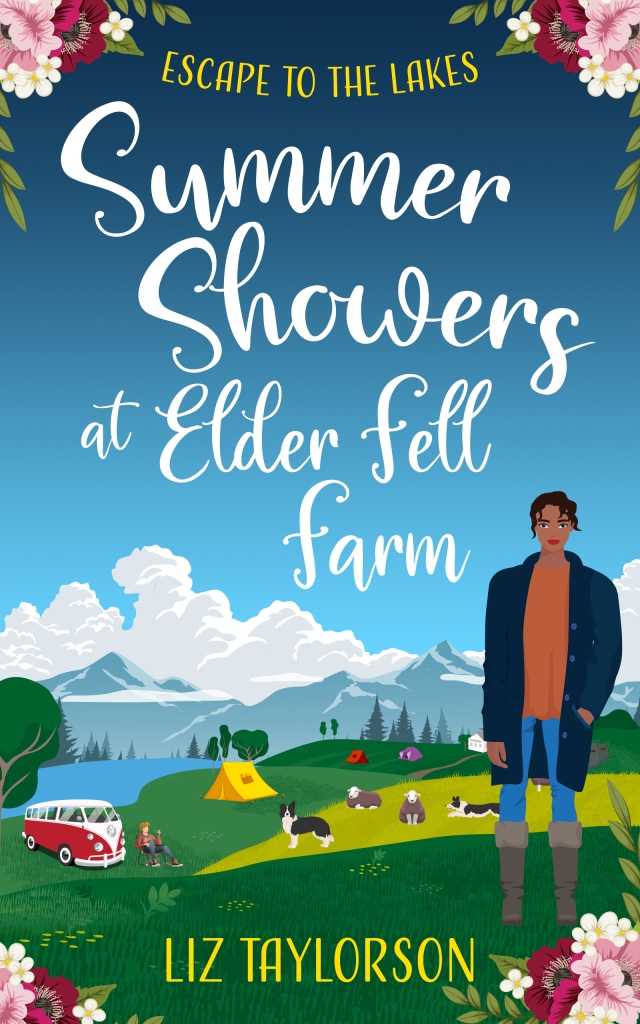 All Amy wants is the chance to spend time with her son. Where better to escape all her troubles than camping at the remote but beautiful Lake District farm where she spent idyllic summers with her mother when she was a little girl?
‘As soon as we get this tent up then I’ll sort out the food and you can have a drink,’ [said Amy.]
‘You liked it yesterday.’
‘I didn’t bring any Coke, but we’ve got some apple juice.’
When Covid struck, Liz was working on a novel set in the 1990s, but sadly research proved difficult when she could no longer access the microfilm readers at the reference library. Instead, she wrote Summer Showers at Elder Fell Farm which relied largely on her own experiences of campervans, campsites and noisy children.
‘Boll-icks, boll-icks, boll-icks,’ Harry intoned rhythmically as she hammered.
‘Okay, you try and peg down this loop here, can you?’ She gave him the mallet and found a stone to use herself. This time she moved the peg a couple of inches to the left. The rubber band that held the tent down was in the wrong place but at least this peg was going in.
‘I want a Coke,’ [said Harry.]
Liz has always surrounded herself with books.
I’m delighted to be sharing an extract from Summer Showers at Elder Fell Farm by Liz Taylorson today. Thanks to Rachel for having me as part of the booktour. First let’s find out what the book is about.
‘Yes, well, that would be nice. A nice sit down with a cup of hot tea would be lovely, in fact, but if I have a time out then the tent won’t get put up and we’ll both be sleeping in your den with the sheep poo tonight.’
‘Here, let me give you a hand.’ He reached up to tighten the guy rope Harry had been holding. As his hood slipped slightly backwards, she got a better look at his face. There was something familiar about him, as if she’d seen him somewhere before. He looked at home in the campsite: an outdoorsy type, no longer young but not yet middle-aged, with windblown hair and hiking boots. Why was he so familiar? Perhaps he was a customer at the bakery where she’d once worked? Did he live in one of the flats near hers? Or … what did Bear Grylls actually look like? She tried to remember, narrowing her eyes and looking at him more critically. It came to her in a flash.
Oh God.
Website: https://liztaylorson.com/
‘I heard that too. I think you’re getting a bit cross there, Mam, I think you might need a time out!’ Now he sounded like Laurie. [His dad’s new girlfriend.]
‘Here,’ said a male voice behind her, making her jump. ‘You look chilly. I thought you might like this.’
Social Media Links
Twitter: https://twitter.com/taylorson_liz
Children interrupted her bibliographic career, and Liz started writing fiction and hasn’t stopped since, joining the Romantic Novelists’ Association New Writers’ Scheme in 2015 to try to learn how to write novels properly.  This led to publication of her first romantic novel, The Little Church by the Sea in late 2017, followed by The Manor on the Moors in 2019.
‘Thank you! That’s so kind of you,’ she said, struggling to her feet, pushing her hair back out of her eyes.
A simple holiday just got complicated …
‘No! I was being silly, I don’t think it would be a good idea,’ she said through gritted teeth, hammering at another peg, which hit another rock, and bent at another ninety-degree angle. At this rate she’d have no pegs left.
About the Author
Her tranquil escape seems doomed when Oliver, and his widowed dad, Matt, turn up on the neighbouring pitch — but at Elder Fell Farm, unlikely friendships can be forged. Are Matt and Amy ready to fall in love again? And will their boys bring them together – or drive them apart?
Now read an extract from Chapter Four
‘You said it.’
US – https://www.amazon.com/Summer-Showers-Elder-Fell-Farm-ebook/dp/B0B57F8V4V
She did know who he was.
Single mum Amy has been struggling since her mother’s death and now her son, Harry, has been accused of bullying schoolmate Oliver — giving Amy’s dictatorial ex-husband yet another reason to criticise her parenting.
‘Bollicks. Bollicks, bollicks, bollicks!’ Harry crowed. ‘I want to do some hammering, Mam!’
As a child, she was always to be found with her head in one and she still has a bookcase full of her childhood favourites to this day. She went on to work in a library cataloguing early printed books – but as most of the books turned out to be volumes of sermons, she wasn’t tempted to read them all!
‘Yes, but I wouldn’t have done if I thought you could hear it.’
Harry moved round to the other side of the tent.
A little bit of background to the extract – Single mum Amy has brought her son Harry on a camping holiday in the Lake District. She’s never pitched a tent before and it’s not going well. Luckily there’s a good Samaritan in the campervan next door, but there’s something familiar about him … Although Amy and Matt have seen each other before – they’ve passed in the school playground as their sons are at school together – but this is the real ‘meet cute’ moment.
‘When we’ve got the tent pitched you can drink it indoors. Stand still for a minute, please.’
‘Please, Harry, could you stop saying that? It’s a very rude word.’ She pushed a soggy curl of hair out of her face.
UK – https://www.amazon.co.uk/Summer-Showers-Elder-Fell-Farm-ebook/dp/B0B57F8V4V
She turned to see a tall man in a waterproof coat with his hood up, holding out a mug of hot tea which steamed in the cool dampness of the afternoon.

‘I don’t like it outdoors. It’s an indoors drink.’
Purchase Links
‘Oh, bollocks’ she muttered, under her breath.
She was hammering at another peg, hitting a rock only a couple of inches under the surface of the soil, and gave it an extra hard knock with the mallet, hoping it would push the stone out of the way and drive firmly downwards, but it simply bent the peg neatly at a right angle.
‘I don’t like apple juice.’ He tugged at the guy rope and frowned in disapproval, a little mirror of his father.
He was Oliver Sutherland’s dad.
‘Can we? Can we really?’ he asked, eyes bright with excitement.
Facebook: https://www.facebook.com/TaylorsonLiz 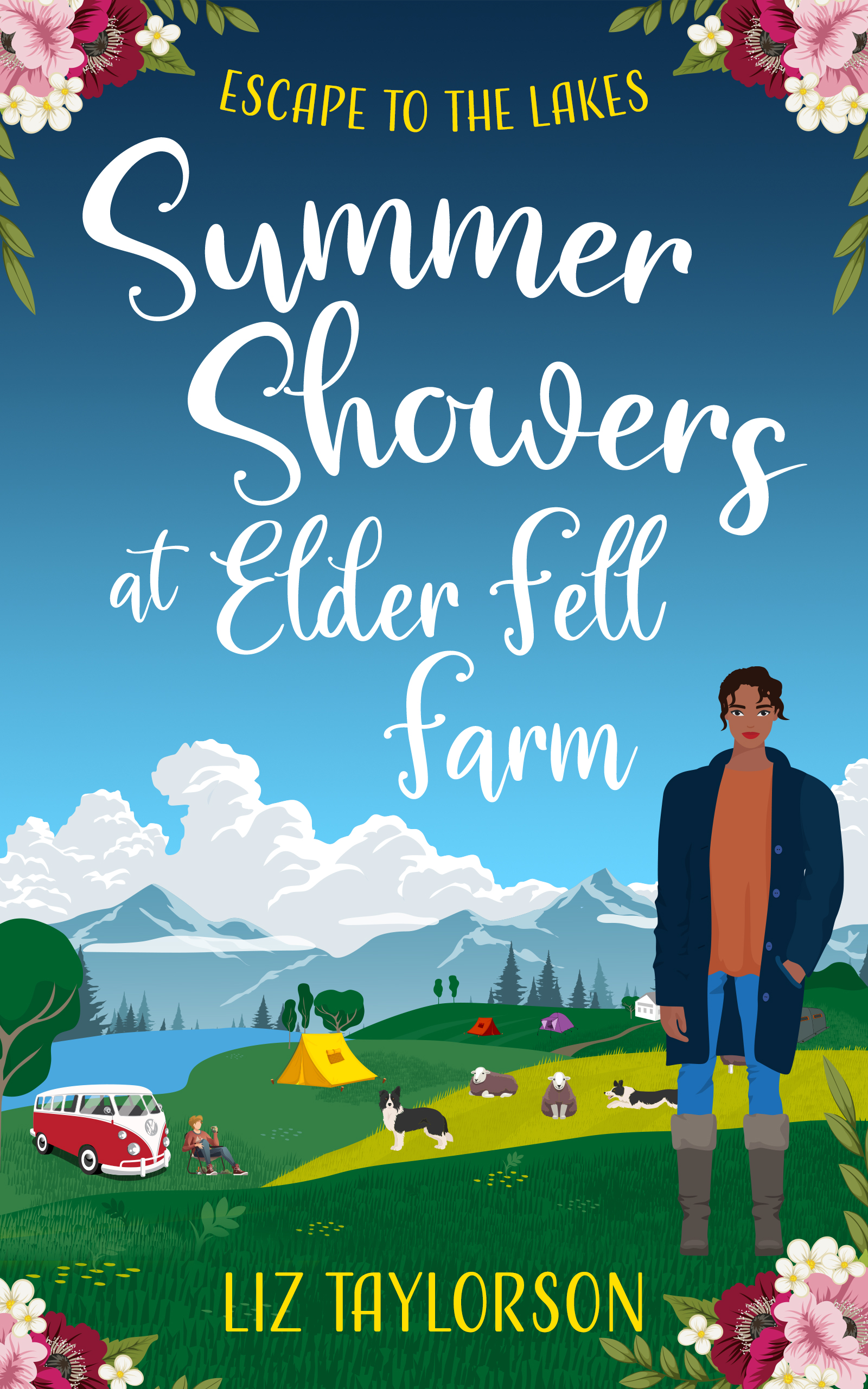