I learned a lot from the book about fairly recent Chinese history and what it was like for Chinese immigrants having to assimilate into a very different culture. They had to make decisions about what parts of their traditions to hold onto and what to leave behind. Renshu adopts the name Henry and takes every opportunity offered to him America. He puts the past firmly behind him, marries an American and becomes American citizen. Yet he was always so wary and careful not to do anything that could create problems for his mother in Taipei. He tries to leave his memories behind and assimilate into American life.
About the Author
The third generation in the book is Henry’s daughter Lily who has many questions about her heritage. Henry is still fearful of the Chinese state and doesn’t want her to look to the past but she has a deep rooted need to know about the Chinese side of her background. She doesn’t quite feel she fits in Chinese community, partly because she was denied that part of her culture when growing up but also doesn’t feel she’s fully accepted as an American either.
At the beginning of this story, we read about Meilin and her son Renshu who are fleeing the Japanese attacks on China. It’s all the more poignant reading this just now when we see people in Ukraine having to do exactly what Renshu and his mother did: leave at short notice to escape a war and take with them only what they could carry and what they valued. I really admired Meilin and her courage and determination to keep her son safe whatever it took. It must have been so hard to look for the blessing in every disadvantage as an old Chinese fable said.
About the Book
I can’t imagine what it must have been like for Meilin, with her only beloved child to moving to another continent with little opportunity to see him again. My daughter is currently studying in Canada and we are able to message every day and have video chats whenever we like. Meilin and Henry’s only communication was a monthly letter with occasional photos and very occasional phone calls.
My Thoughts
One of things Henry learned from the Chinese stories he heard as a boy was about not looking back, to take everything of value with you, to leave behind anything which weighs you down. While he and his mother literally had to do this in his early life, he metaphorically clings to this throughout his life too until he realises that he really has to come to terms with his past.
It is 1938 in China, and the Japanese are advancing. A young mother, Meilin, is forced to flee her burning city with her four-year-old son, Renshu, and embark on an epic journey across China. For comfort, they turn to their most treasured possession – a beautifully illustrated hand scroll. Its ancient fables offer solace and wisdom as they travel through their ravaged country, seeking refuge.
Spanning continents and generations, Peach Blossom Spring is a bold and moving look at the history of modern China, told through the story of one family. It’s about the power of our past, the hope for a better future, and the search for a place to call home.
With every misfortune there is a blessing and within every blessing, the seeds of misfortune, and so it goes, until the end of time.
Peach Blossom Spring is an outstanding debut novel and I was really interested to read how much of it was inspired by the author’s own father’s story. This captivating, epic story of family, belonging, resilience and hope is just superb and I highly recommend it.
Melissa Fu grew up in Northern New Mexico and has lived in Texas, Colorado, New York, Ohio and Washington. She now lives near Cambridge, UK, with her husband and children. With academic backgrounds in physics and English, she has worked in education as a teacher, curriculum developer, and consultant. She was the 2018/19 David TK Wong Fellow at the University of East Anglia. Peach Blossom Spring is her first novel.
Years later, Renshu has settled in America as Henry Dao. His daughter is desperate to understand her heritage, but he refuses to talk about his childhood. How can he keep his family safe in this new land when the weight of his history threatens to drag them down?

Please do judge this book by it’s beautiful cover as it’s such a beautiful story. Spanning over 70 years and telling the story of three generations, this is a wonderful book about courage, family and resilience. 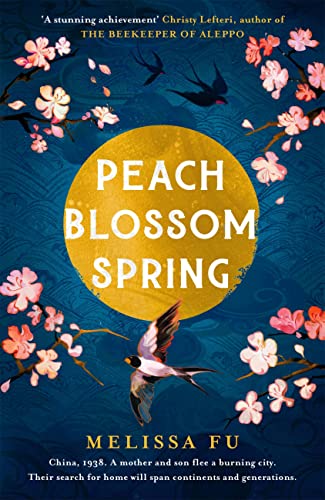