Chloe is like any new University student. She has to navigate new roommates, new lesson plans, buy text books and forge friendships. She also has to plan to a murder. Chloe is a diagnosed psychopath and has been accepted at University to be part of a clinical study with other students given the same diagnosis. But when other members of the study begin to be murdered Chloe has to team up with fellow participants Charles and Andre to ensure she isn’t the next target. After all, she hasn’t carried out her own planned murder yet. 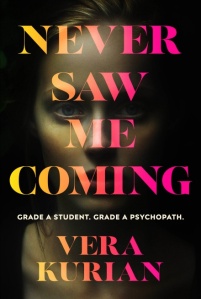 There is of course the inevitable discussion of nature versus nurture. Are those with psychopathy born that way or does it develop? Are there triggers, childhood traumas or illness that can bring it to the fore? There is also the question that the study wants to answer: can psychopathy be cured? All of this leads to a thought-provoking read, one that just happens to be highly entertaining in the process.
Meet Chloe. First-year student, ordinary, legging-wearing, girl next door…and psychopath.
Recommended.
Publication date – 9 September 2021 (Hardback) 7 July 2022 (Paperback) (Vintage)
I found the whole premise fascinating. The characters were people I couldn’t say I related to but the way Chloe rationalised things, or didn’t made her so interesting to read about.  She knows she has to cultivate an outward persona, that she has to be seen to be making friends, getting drunk and doing “typical” teenager activities so that she isn’t recognised as an outlier. She is focussed, driven, so intent on her plan to kill Will, her childhood nemesis, but that doesn’t stop her studying or planning on finding who is killing the other study participants. She isn’t worried about the others in the group, her wish to stop the murders is simply because they are getting in the way of her plans.
Chloe is part of a secret clinical study of young psychopaths run by the university’s Psychology Department. Most psychopaths aren’t criminals, but when a string of murders on campus causes upheaval, Chloe’s private vendetta is sidelined. Partnered with fellow study participants she can’t trust – and distracted by typical university life – Chloe has to walk the line between hunter and prey.
Published by Harvill Secker
Source – review copy
There are flashes of dark humour throughout the novel. Chloe is matter of fact, discusses planning to murder Will in a casual way, drops in that she steals things and breaks into houses as if it’s just an everyday, normal thing, which to her it is. She is without remorse yet has feelings, though they are, admittedly, self-centred concerns for herself rather than for others. Charles is a little more considerate of others, which is sometimes at odds with his diagnosis but again with him, it is more that he has learned he has to have those feelings than actually having them. Andre is the outlier. He is a great way of showing the difference between the three.
I loved this foray into the darker side of student life. Chloe is a hugely interesting character and I was vested in her, and even in her very warped ideas of justice. I am perhaps just a tiny bit glad I don’t have to share a dorm room with her though.
This book had been sitting on my shelf for a while when I saw it mentioned somewhere. I picked it up to take a look and was soon drawn in.
The book makes the reader re-evaluate their ideas about psychopathy. Yes there is the murderous intent, from Chloe at least, and the desire to control others to get her own way, but it also shows the ruthlessness and drive, the selfishness and lack of empathy that help diagnose the trait. There is discussion how many with psychopathy are undiagnosed, but who lead lives where they may not kill, but will be driven by what will seem like selfishness to others to be at the top of their chosen field.