Miss Marple meets Oscar Wilde in this new series of cosy mysteries set in the picturesque Cotswolds village of Bunburry. In “Murder at the Mousetrap,” the first Bunburry book, fudge-making and quaffing real ale in the local pub are matched by an undercurrent of passion, jealousy, hatred and murder – laced with a welcome dose of humour.
The writing in the books is warm and witty and they made me smile a lot. It reminded me of the gentle writing style of Alexander McCall Smith and if you have enjoyed the Thursday Murder Club books by Richard Osman, I think you’d like these Bunberry mysteries too. I’m looking forward to getting to know Alfie and the rest of the villagers better in future books, although I hope too many of them don’t get bumped off like in the fictional village of Midsomer! A Murder at The Mousetrap and A Murderous Ride are both well-written, easy to read and jolly good fun!
Alfie discovers it’s a seriously bad idea to get on the wrong side of the local police sergeant. Especially when he finds himself at a murder scene and the sergeant decides Alfie’s the murderer. There’s only one thing to be done. Alfie has to track down the real murderer himself – which will force him to drive as he’s never driven before.
Murder at the Mousetrap
I’m reviewing the first and second books in the series today and I thoroughly enjoyed these cosy mysteries. Their novella length make them perfect for reading at this busy time of year. I enjoyed getting to know the protagonist Alfie McAlister and there is obviously more to be revealed about him which I’ll look forward to discovering in the other books.
In “A Murderous Ride,” the second Bunburry book, Alfie discovers that he has not only inherited a cottage from his late Aunt Augusta but also a 1950s Jaguar. He is dismayed: for reasons of his own, he no longer drives. Aunt Augusta’s best friends, Liz and Marge, persuade him to get behind the wheel again – but that’s just the start of his troubles.
Helena Marchmont has created a great setting for this series with Bunberry having the feel of a cosy, old fashioned village but with all kinds of secrets, passions and undercurrents lying just below the surface. Alfie’s horrified reaction to the decor in his late aunt’s cottage which he had inherited was so entertaining and I could really picture it, right down to the avocado bathroom suite!
About the Author
Alfie McAlister has retreated from London to the peace and quiet of the country to recover from a personal tragedy. But an accidental death – which may have been no accident – reveals that the heart of England is far from the tranquil backwater he imagined. After arriving in Bunburry, he is co-opted as an amateur detective by Liz and Marge, two elderly ladies who were best friends with Alfie’s late Aunt Augusta. And it is not long before their investigations take an even more dramatic turn …
The Bunberry cosy mystery series is written by Helena Marchmont, better known to me as Olga Wojtas, author of the Miss Blaine’s Prefect books featuring the inimitable Shona McMonagle. I really enjoyed those books and thought it was about time I gave the Bunberry books a try. I bought the first three books as a ‘box-set’ from Amazon although all 12 (soon to be 13) are available individually. They are published as ebooks and most of them are also available on Audible. Find out about all the books here: Bunberry
My Thoughts
About the books
The residents of Bunberry are what made these books so enjoyable to read for me and Helena Marchmont has populated her fictional Cotswold village with some memorable characters. I particularly liked friends Marge and Liz and the gently teasing banter between them. An off-stage character, Archie’s friend Oscar, was very entertaining too. I already feel like these characters are old friends who I’ll look forward to meeting again.
A Murderous Ride

Helena Marchmont is a pseudonym of Olga Wojtas, who was born and brought up in Edinburgh. She was encouraged to write by an inspirational English teacher, Iona M. Cameron. Olga won a Scottish Book Trust New Writers Award in 2015 and recently published her second book in the Miss Blaine mystery series. 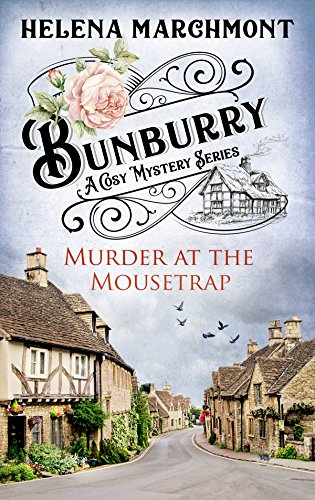