@salenagodden | salenagodden.co.uk
Source – review copy
Death isn’t the grim reaper with his scythe and hooded cloak. Death is a black woman. Working class, easy to ignore, easy to step around or push aside. Wolf Willeford is no stranger to death. Their father disappeared and is believed to be dead. Their mother died when they were a child and so they are alone. Until Mrs Death comes into their lives and allows Wolf to see that they can live again rather than survive.
Wolf is gender neutral. They are a metaphor for grief and death, both of which effect everyone at some stage, regardless of gender. Mrs Death is depicted as she is because death is there, always in sight but invisible, waiting quietly (for the most part) in the wings until called.
Publication date – 28 January 2021
Salena Godden is one of Britain’s best loved poets and performers. She is also an activist, broadcaster, memoirist and essayist and is widely anthologised. She has published several volumes of poetry, the latest of which was Pessimism is for Lightweights, and a literary childhood memoir, Springfield Road.
Mrs Death has had enough. She is exhausted from spending eternity doing her job and now she seeks someone to unburden her conscience to. Wolf Willeford, a troubled young writer, is well acquainted with death, but until now hadn’t met Death in person – a black, working-class woman who shape-shifts and does her work unseen.
There is commentary on accidental deaths, the ones where human error, which should have been obvious, occur when common sense goes out of the window. Murders are touched upon, tragic accidents, illnesses and suicide, the whole gamut of how life ceases to be is considered.
About the Author 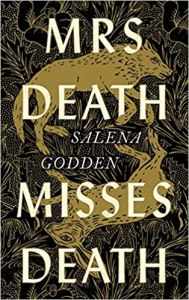 Salena Godden is a poet and Mrs Death Misses Death is her debut novel. That poetry is abundant in the book, the cadence and flow of the story one which carries it and for me makes it. It is what appealed the most when I started to read the book and it kept me wanting to read.
The narrative is a stream of consciousness style that did take me a little time to get used to. The reader isn’t always aware of whether Mrs Death is really narrating her tale or if the whole book is Wolf sorting through their feelings of loss and suppressed grief. It is perhaps both.
This book won’t be for everyone. The style will be off-putting for some. The focus will be a difficult one for many. However, it is not a morbid book. By listening to Mrs Death, Wolf faces their own grief at the loss of their mother and father, allows them to address the anger they felt towards them, the guilt for surviving when they didn’t.
Don’t expect a linear story. Unlike life, which take a step forward each day towards death, Mrs Death is slightly chaotic, sometimes rambling, breathless and incomprehensible, much like death itself. There are tragic moments, to have a book devoted to death is highly unlikely not to be emotive. It does make the reader think about mortality, about the incessant and instinctual need to delay it, to delay aging, an attempt everyone knows is futile before they start. However it also makes the reader stop and think, to appreciate the here and now. To perhaps not take that selfie so close to the edge of the Grand Canyon or simply look at how their every day actions could enhance their lives and not bring it one step closer to the end.
Mrs Death Misses Death is her debut novel. A BBC Radio 4 documentary following Godden’s progress on the novel over twelve months was broadcast in 2018. In November 2020 she was made a Fellow of the Royal Society of Literature.
Published by Canongate
There is inevitably much discussion of death, from accidental to intentional to slipping quietly away. There is a different take on a famous murderer, focussing instead on the first victim. There are moments where the reader will recognise their own thoughts and feelings on the finality and fragility of life. That Mrs Death will visit us all at some stage is the one certainty in life. It is how we prepare for her that counts.
Enthralled by her stories, Wolf becomes Mrs Death’s scribe, and begins to write her memoirs. Using their desk as a vessel and conduit, Wolf travels across time and place with Mrs Death to witness deaths of past and present and discuss what the future holds for humanity. As the two reflect on the losses they have experienced – or, in the case of Mrs Death, facilitated – their friendship grows into a surprising affirmation of hope, resilience and love. All the while, despite her world-weariness, Death must continue to hold humans’ fates in her hands, appearing in our lives when we least expect her …
An interesting novel, one which will divide readers but will make those of us who reach the final page think.
Whilst about death, Mrs Death Misses Death is not wallowing or morose. It is about appreciating that one day, at a time and place unknown to the majority of us, life will one day cease. It is about looking at how society and the individual views death, how even dying has altered over the centuries, how mourning and grief don’t follow a pattern or rules.