And why, all those years ago, when two girls pulled on their raincoats and wellies and headed out into the woods did only one of them return?
Mahsuda was the winner of the SI Leeds Literary Prize 2014, the Bristol Short Story Prize 2014 and has led creative writing workshops in universities, hospitals, schools and a homeless hostel. She is a commissioned writer for the Colonial Countryside project and her short story ‘The Panther’s Tale’ is included in Hag: Forgotten Folktales Retold (Virago). 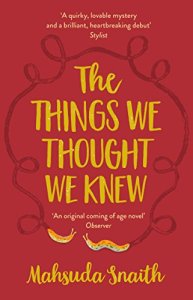 7. What do you hope readers will take away from your writing?
I was commissioned by Audible to retell a forgotten folktale from the Midlands. The story I was given was about the legend of Chillington Hall where the owner, John Giffard, owned a menagerie of exotic animals. As legend tells it, one of those animals managed to escape into a nearby forest. That animal just happened to be a panther. It was such surprising and wonderful material that it instantly set my imagination alight. I had just finished a project where I had researched and written short stories about the British Raj and had read folktales of Bangladesh for my research. After reading folktales from England and the Midlands in books by the Society of Storytellers, it almost felt instinctual to use the tropes of South Asian and English folktales – the use of ordinary folk as well as royalty, animals, curses etc. – and have a panther who is actually an Indian princess who can morph into human form. I called this story The Panther’s Tale and it was included in HAG: Forgotten Folktales Retold. This is one of the stories I’m most proud of because, not only did it feel like it was being written by someone else with all the parts seemingly clicking into place as I wrote, it also addresses so much about the status of women in society and the ways different histories can overlap within a format that is, hopefully, captivating to hear or read.
Listen for your voice. When you begin, you will emulate the stories that have inspired you (I did this myself with my tape-bound books). It’s a part of the process. But after you’ve let those pieces breathe, go back to that writing and see where your voice stands out, see which parts you enjoy reading, see what elements of the story you still feel a connection to. Think about your interests and life experiences, think about what made you begin telling stories in the first place, then, with everything you’ve learnt, write the story only you can write.
It began for me when stories were read out loud at school. I remember sitting on the carpet and listening to picture books then chapters of longer books when we were older. I was a really shy kid but I was an active daydreamer so I remember relaxing back and imagining it all happening in my mind. Soon, I was creating my own stories and playing out scenes in my imagination. In fact, I still do this! I am a definite believer that daydreaming about story is counted as writing time.
8. If you had one piece of advice for someone wanting to tell a story of their own, what would it be?
Mahsuda Snaith was an Observer New Face of Fiction in 2017. Her debut novel The Things We Thought We Knew (Black Swan) was released in 2017 when she was named an ‘Observer New Face of Fiction’. Her second novel How to Find Home (Black Swan) was chosen as a BBC Radio 4 ‘Book at Bedtime’.
Today sees the start of National Story-telling week,  a celebration of the oral tradition of storytelling, and takes place for a full week at the beginning of February each year. Stories are told in schools, theatres, pubs, village halls, community centres, and are a way of bringing people together.
It was never my intention, but after writing a body of work, I came to realise that the stories I gravitate towards are the hidden, sometimes buried stories, of the people around us. I hope that my stories give readers glimpses of less visible worlds as well as seeing a part of themselves in fiction that they have never seen represented before. But most of all I want readers to be entertained! To be taken on a journey that gives them the highs and lows of life, to laugh, to cry but, most of all, to feel. And all within the comfort of their armchair.