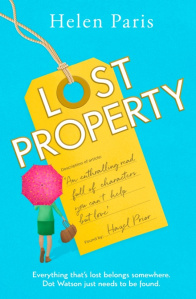 Dot feels like she has little left to lose. Her beloved father died many years ago and she still struggles with the grief. She has never been close to her sister, Philippa, and she can feel her mother slipping away as the dementia takes over. As what she perceives as pressure builds up, Dot takes solace in the pits, the bowls of the lost property office where Big Jim sorts out unclaimed items to be sent to auction.
Dot Watson spends her days cataloguing the items lost on London’s public transport. She takes pride in her work, in the detail , such as the correct colour of the object (it’s important to not put just yellow, but mustard, mellow or sunflower for example). She imagines what the item meant to the owner, familiar herself with the importance people attach to property and things. When Mr Appleby comes in looking for his holdhall, that carries in it the purse of his late wife, Dot knows she has to do all she can to find it. What she may also find in the process is herself.
But when elderly Mr Appleby arrives in search of his late wife’s purse, his grief stirs something in Dot. Determined to help, she sets off on a mission – one that could start to heal Dot’s own loss and let her find where she belongs once more…
Recommended.
Dot has to unravel before she can see that she has become undone, drifting through a life she didn’t envisage and doesn’t realise she is living. Mr Appleby holds a mirror up to her life, just as her mother’s doctor shows her a side to her mother’s illness she had not seen before.
Helen Paris worked in the performing arts for two decades, touring internationally with her London-based theatre company Curious. After several years living in San Francisco and working as a theatre professor at Stanford University, she returned to the UK to focus on writing fiction. As part of her research for a performance called ‘Lost & Found’, Paris shadowed employees in the Baker Street Lost Property office for a week, an experience that sparked her imagination and inspired this novel.
Dot Watson has lost her way.
About the Author
Twelve years ago her life veered off course, and the guilt over what happened still haunts her. Before then she was living in Paris, forging an exciting career; now her time is spent visiting her mother’s care home, fielding interfering calls from her sister and working at the London Transport Lost Property office, diligently cataloguing items as misplaced as herself.
Dot looks for meaning in the items that pass her desk. She imagines the owner wearing the gloves, the jacket that has moulded to the shape of its wearer. She collects travel guides, Big Jim rescuing unclaimed ones from the pit. Gaining comfort from places she will never travel to, she lives vicariously through others, placing guides in coats and bags, hoping that the owner will be inspired to visit places Dot would like to see.
Published by Doubleday
Publication date – 13 May 2021
This is not a romantic love story. It is moving in places, funny in others. It is a story about familial love, about friendship and about loving yourself. It’s not only about being content with your lot in life but about challenging yourself and the existence you find yourself living. It’s about knowing when to keep hold of things and when to let go.
Lost Property is a lovely tale about realising the important things in life. It’s not always in the most expensive thing but in treasured mementos, and memories. It’s about finding yourself when you didn’t realise you were lost, and realising that the real you is just as precious as anything.
Source – review copy