My debut novel, The Stranding, is about Ruth Lancaster, a British woman in her late thirties. Through two intertwined timelines the book charts her life before and after she survives a mass extinction event by hiding in the mouth of a whale! 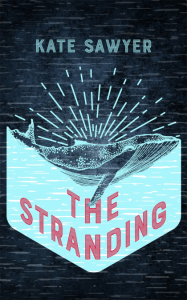 Kate kindly answered a few of my questions.
4. Is there anything about the process of publishing a book that surprised you?
A toughie that one…Night’s At The Circus by Angela Carter, maybe? It’s got everything, romance, mystery, beautiful language, broad scope of a journey, laughs and a good dollop of weirdness. That said, maybe, The Time Traveller’s Wife, I think that is the book I’ve read the most times, so I should probably stick with something I find so comforting.
1. Tell us a little about The Stranding.
No one has asked me yet what I’d like to drink…because all of the interviews have been online! I am desperate to meet people face to face to talk about the book or just talk face to face in general! With my fingers firmly crossed that that will be something we’ll be able to do soon, my answer is: Flat White (if we’re in a cafe), Dry White Wine (if we’re in a restaurant) and Negroni (if we’re in a bar!). Oh, and the next round will be on me!
When all has been razed to the ground, what does it mean to build a life?
About the Author
Half and half. I’m writing my second novel at the moment and the writing process is quite similar to that of The Stranding. I tend to just start writing, pouring ideas onto the page and seeing what characters and situations emerge, then, I’ll find I’m stuck at a cross-road and have to make myself a little map, an idea of where I might go. I’ll try and write to the plan for a bit and then, inevitably, the work finds a route of its own and I’ll end up writing off plan to the finish line!
When a new romance becomes claustrophobic, Ruth chooses to leave behind the failing relationship, but also her beloved friends and family, and travels to the other side of the world in pursuit of her dream life working with whales in New Zealand.
Kate Sawyer’s debut novel, The Stranding is published by Coronet on 24 June 2021.
6. If you could only read one book for the rest of your life which book would it be?
3. Are you a plan, plan, plan writer or do you sit down and see where the words take you?
5. What do you do when you aren’t writing? What do you do to relax and get away from it all?
HER WORLD FELL TO PIECES.
Kate Sawyer worked as an actor and producer before turning her hand to fiction. She has previously written for theatre and short-film. Having lived in South London for the best part of two decades she recently returned to East Anglia to have her first child as a solo mother by choice.
But when Ruth arrives, the news cycle she has been ignoring for so long is now the new reality. Far from home and with no real hope of survival, she finds herself climbing into the mouth of a beached whale alongside a stranger. When she emerges, it is to a landscape that bears no relation to the world they knew before.
I signed my deal the week before lockdown, so like many debuts coming in 2021, my experience of the publishing journey has been the new ‘Coronavirus Edition’ of publishing. I suppose, the biggest surprise, has been that to this point I haven’t felt a huge amount of pressure for deadlines. I had some sort of idea, I’m not sure from where, that publishers were forever imposing impossible deadlines and writers are constantly sweating over copy-edits by the midnight oil. Maybe I’ve just been very lucky with the publishing team at Coronet giving me advance warning and the time and space to be creative, but the pressure I was expecting in that respect hasn’t been an issue!FROM THE BONES SHE BUILT A NEW LIFE.
The Stranding is a story about the hope that can remain even when the world is changed beyond recognition.
About the Book
Ruth lives in the heart of the city. Working, drinking, falling in love: the rhythm of her vivid and complicated life is set against a background hum of darkening news reports from which she deliberately turns away.
7. I like to end my Q&As with the same question so here we go. During all the Q&As and interviews you’ve done what question have you not been asked that you wish had been asked – and what’s the answer?
2. What inspired the book?
The moment the book hinges upon – hiding inside a beached whale whilst the apocalypse is happening – was a moment of inspiration that came to me whilst writing a response to a brief for a challenge I was taking part in to write a play a day in February (it’s called 28 Plays Later and run by an organisation called The Literary Challenge – I highly recommend looking it up!). However, when I really got into writing The Stranding as a novel, the inspiration was mostly taken from the big questions that I was finding myself turning over and over in my mind at the time; the responsibilities of parenthood, the dynamics of relationships, whether people can be innately ‘good’ or ‘bad’, what makes life worth living…little things like that! Though, rather than answering those questions, I think I’ve posed more…but that’s the point of literature, isn’t it?
I read a lot. I like to set myself challenges like reading all of a prize longlist or the back list of a particular author. I love feeling a sense of completion, but also being able to compare and contrast within parameters. Away from books, I have recently discovered I love gardening. Possibly the reason I wasn’t aware of this before is that the London flat I lived in for the last fifteen years only had a little square of concrete. Since moving to Suffolk I have a garden of my own, it even has a greenhouse! I also love cooking, knitting, watching tv and playing with my daughter and cat!