4. Is there anything about the publishing process that still surprises you?
About the Book
What question do I wish had been asked? Well, I think the way writing and gardening are presented always under plays the sheer bloody hard work involved. This is true of doing anything well from baking to xylophone playing. But it is very unfashionable to go on about all the times you failed, all the plants you killed and the pages you tore up. I do get asked ‘how do you do so much?’ but I don’t think the answer is very popular when you say broken finger nails and endless re-writes.
After publishing Scent Magic, an acclaimed memoir of plants, gardens and scent, Isabel Bannerman couldn’t leave the subject alone. ‘I came across the star-nosed mole, an adorable and preposterous creature with a highly specialized sensory-motor organ, while writing about the riches of the soil kingdom … and, somewhat mole-like … as I was trying to write about the impossibility of writing effectively about smell, I began to nose around for great writers’ solutions to this problem. How and how much have writers considered the lilies of the field and how they smell. I began grazing on literature and gathering in my stores of quotes.’
I think I shoot off after an idea and then try to shape it up after into a form that might add up to an argument or something of interest. I am not much of a scholar, my mind is very mercurial and at school my essays were always criticised for eliding over the facts, which I clearly knew but didn’t set out clearly.
2. What inspired the book?
It became a fascination to find out how great writers wrote about the elusive sense of smell and used its atmospheric and intuitive powers. I produced a little Christmas present of these in book form last year and then expanded it to include more writing some essays of my own on the important issues and questions to do with the role of smell in the natural world, and in particular its connection with invertebrate collapse, which were still nagging at me. I felt there was a message lurking there. Smell it seems from literature was much more potent before the industrial revolution and this may well have been detrimental to all life forms that rely on smell especially for forage, defence, sex and reproduction. 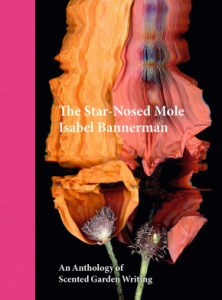 1. Tell us a little about The Star-Nosed Mole.
How long it takes to finish something after you think you are finished! There are so many details to check and pick up on and in this case we all worked really fast and there are some typos that five of us managed to miss.
7. I like to end my Q&As with the same question so here we go. During all the Q&As and interviews you’ve done what question have you not been asked that you wish had been asked – and what’s the answer?
5. What do you do when you aren’t writing? What do you do to relax and get away from it all?
I run a business designing gardens and buildings. I garden to relax and get away from it all and I write for the same reason. And I read and watch telly.
Because I did a lot of reading round the subject I ended up keeping a sort of commonplace book of quotes from anything I was reading, or people suggested, or remembered that involved writing about smell.
My sense that smell, having always been the undervalued sense, was becoming even less valued in an increasingly polluted and urbanised world, and also, it appears, being destroyed. My inspiration was the thought this loss diminishing our life experience and probably all living things. Something apparently so hedonic and infinitesimal is deeply crucial to some forms of life in the earth, air and sea.
Isabel kindly answered a few of my questions.
If I could only read one book for the rest of my life it would have to be…so difficult….War and Peace.
In reviews of Scent Magic, Isabel was lauded for ‘putting into words what so much escapes language. With a wonderful range of reference and allusion, it’s nothing less than poetry… (Evening Standard)’. And in this anthology, with her beautifully written linking passages bringing carefully chosen quotations together with her dramatic, powerful and mysterious plant images, she evokes the scented garden through poetry and prose spanning millennia, from Ovid to Proust, Milton to George Eliot, and Emily Dickinson to Alice Oswald.
The Star- Nosed Mole is a sort of salad of delicious scented titbits that did not go into my book about scent in the garden “Scent Magic”
6. If you could only read one book for the rest of your life which book would it be?
Isabel Bannerman’s book, The Star-Nosed Mole, was published by Pimpernel Press on 23 September 2021.
3. Are you a plan, plan, plan writer or do you sit down and see where the words take you?