Sadie Ryan’s novel, Guilty, was published by Spellbound Books on 21 April 2021.
It did enter my mind to shepherd him around the back of the pub and fuck him. I could have said, ‘Hey, buddy, I can see you’ve got a stiff one, wonna go around the back and fuck?’ Men like it when you talk dirty. Weird, aren’t they? He’d say, ‘Only if you touch me now then give me a blow job.’ I’d reach inside his pants watching his face contort as he became aroused. We’d go outside, I’d pull off my knickers and straddle him leaning against the cold brick wall while the acrid kitchen smells drifted around us as he puffed and grinded me into the brickwork. He’d come, I wouldn’t. Sometimes I get mad thoughts to do reckless things. That wasn’t one of them.
When we first met, we were flying high. Ambitious. We met at the same firm of architects. I’d majored in languages in the States and when I came to the UK, I did a fast track course in architecture. We worked in Manchester in a charming office building off Spring Gardens. Very contemporary and of its time. We used to lunch every day and after work grab a drink before heading home. Parties were plentiful and we went to most of them. We were professionally recognised in the city. We won many of the commissions we pitched for. The golden couple, they called us. We opened our own company LF Architects, it grew rapidly, we employed twenty-five people and life was prosperous. Even after we married and had the kids, I went back part-time. We were living the dream; life couldn’t get any better. How many times did we mention to each other that We were blessed? Untouchable we thought. On a never-ending roll. But that’s untrue, isn’t it, because all rolls have to come to an end. Ours did. Oh, boy, did ours come to an end and then some.
In a split second, a tragic accident causes Lindy’s world to come crashing down around her.
When asked where she gets her ideas from, she says, ‘From observation, inspiration and lots of wicked thoughts.’
About the Author 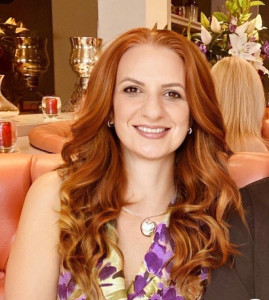 Lindy once had the world at her feet. An adoring husband, two beautiful daughters and a successful career. 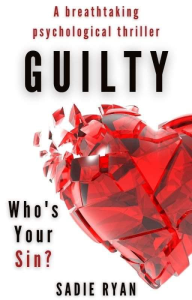 Follow her at: Facebook: https://www.facebook.com/sadieryanauthor Website : https://www.sadieryan.co.uk/ Twitter: https://twitter.com/The__SadieRyan
Sadie Ryan is the author of three books. Her latest, Guilty came out in April 2021, a psychological thriller. She loves animals and lives in leafy Cheshire in the North West of England with her daughter and rescue dog. When not writing she spends her time reading, gardening, walking her dog or watching old black and white movies.
Mia’s children come to visit about once a month. She has two girls, Annie and Sally. They look alike, they look like Mia with Ricky’s height. I don’t know where they live but I don’t think it’s too far away, for the simple fact they come too often. They sit in the dining room enjoying a meal cooked by Mia every, single time. With my binoculars I can see them clearly, laughing, eating and generally behaving like a normal family should. I think it’s a roast dinner most times. It looks delicious and I want to join them but that’s not happening. I can hardly stride up to the front door and say, ‘Hey there, that looks great, mind if I join you?’ I snigger. It would be funny though.
About the Book
The other night at the pub where young loves dream nurtured a wet dream about Mia, a guy actually tried to pick me up. I know you’re surprised but no more than I was. Although I had made an effort that evening for a change. Not much of an effort but it was an effort. Mia wouldn’t have spoken to me if I looked like I do right now. I sniff my coat and wrinkle my nose. I think it was probably the first time in forever that that happened. The guy was overweight but nicely dressed in a tailored suit. He looked sharp a bit like Frank used to look. Nice hands. Good haircut and clearly well off. He liked to pay with big notes. Why the hell he wanted to chat me up still baffles me. I was blunt and rude and generally not pleasant but he was damned persistent in a semi-aggressive way guys can get when they’re not getting their own way. His eyes stayed focused on my breasts, I guess I forgot to tell you I have a good rack as they say in the States.
Today I have an extract from the book to share with you.
As obsessions grow and the lines that shape reality become blurred, Lindy’s and Mia’s lives are now forever dangerously intertwined as personalities merge.
Mia, a personal fitness trainer and glamorous wife of a local tv personality seems to have everything.
Slowly Lindy learns more about Mia’s ‘perfect’ life and becomes convinced that they are each other’s saviours.