About the Book
The Three Locks by Bonnie MacBird is published in paperback, ebook and audio download by Collins Crime Club.
This one: Watson is a Victorian Englishman, soldier, doctor, ladies’ man, and adrenaline junkie. You are none of these things. How do you channel his voice, and his point of view?
Bonnie Macbird is the author of Art in the Blood, Unquiet Spirits: Whisky, Ghosts, Murder and The Devil’s Due. The fourth book in her Sherlock Holmes series, The Three Locks, was published by Collins Crime Club on 28 October 2021.
It’s a hellishly hot autumn of 1887, and Watson receives a mysterious box with a secret from his past. But its lock defies every effort to open it. The feisty daughter of a Cambridge don dangerously taunts three young lovers, and the Italian wife of a famous escape artist is accused of fatally locking her husband into his “Cauldron of Death” illusion during a performance. These three tales bring Holmes and Watson from London’s theatres to the Cavendish Laboratory in Cambridge, culminating in a terrifying event at the Jesus Lock on the River Cam.
I began as a total “pantser”, (i.e.writing by the seat of one’s pants) allowing the characters to lead the way. Lots of fresh writing happens with this technique, and it worked well for me – perhaps helped by my years as a story development exec and screenwriter which gave me a strong sense of structuring a story. Just as Holmes “rebels against stagnation”, so do I rebel against working to a strict outline. But I have developed my own combination technique which begins with a loose examination of themes, locations, moments, and character. I then begin to outline and move back and forth between outlining and “wild mind” drafting, weaving between the two.
The Three Locks is the fourth in my traditional Sherlock Holmes series for HarperCollins. (They can be read in any order.)
7. I like to end my Q&As with the same question so here we go. During all the Q&As and interviews you’ve done what question have you not been asked that you wish had been asked – and what’s the answer?
The title came first, then brainstorming the many uses of locks – to protect, to restrict, to hide, to imprison. I was fascinated to learn that some locks are “trick locks” and impregnable. Then there was the piquantly named “Jesus Lock” which is a river lock in Cambridge, a treacherous place where it is very easy to drown. As I researched Victorian Cambridge, a hotbed of women’s issues at the time, I became interested not only in student life, but also the notorious Spinning House, a house where women suspected of ‘walking with undergraduates’ where held, and the Cavendish Laboratory, where modern physics was being invented.
5. What do you do when you aren’t writing? What do you do to relax and get away from it all?
1. Tell us a little about The Three Locks.
Bonnie kindly answered a few of my questions. 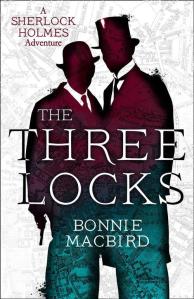 4. The Three Locks is the fourth in the Sherlock Holmes Adventure series. What are the benefits and downsides to writing a series? Was there any added pressure writing about characters that are so entrenched in society?
3. Are you a plan, plan, plan writer or do you sit down and see where the words take you?
2. What inspired the book?
The Complete Works of Shakespeare.
In Whitechapel, a renowned Italian escape artist dies spectacularly on stage during a performance – immolated in a gleaming copper cauldron of his wife’s design. In Cambridge, the runaway daughter of a famous don drowns, her long blonde hair tangled in the Jesus Lock on the River Cam. And in Baker Street, a malevolent locksmith exacts an unusual price to open a small silver box sent to Watson.
My favourite pastimes include watercolour, theatre, acting, walking in Regent’s Park, reading, and taking classes in things that interest me.
The benefits of writing in a series are threefold. First, one can grow with the character, and introduce and carry through new ones, who also can evolve. Second, I think readers enjoy series, especially those such as mine where you do not have to read them in order. If readers enjoy a book, it’s great fun to discover there are more by the same author. And the third reason is that I improve by continuing the challenge. And yes, it’s hard to write an established character. Everyone has some image of Sherlock Holmes in their head.
All good novelists should be able to write the opposite sex. Channelling “other” is what writers and actors do. Also, I have much in common with Watson. I have been married for forty years to an internationally recognized genius. I’d rather be with this man than anyone, and I’m both in awe and pragmatic about him in pretty much exactly the way Watson is with Sherlock Holmes. I may not be his intellectual equal, but neither do I feel stupid. He, after all, wants to be with me! I have qualities and talents that my husband does not, writing among them. Humour and love underscore our relationship. Finally, my husband is also both generous and kind, as was my father, a very brave WWII Navy pilot. Their humanity and deeply moral natures mirror Dr. John Watson’s. They, and he, live inside me.
6. If you could only read one book for the rest of your life which book would it be? From the glow of the London stage to the buzzing Cavendish Laboratory in Cambridge, where physicists explore the edges of new science of electricity, Holmes and Watson race between the two cities to solve the murders, encountering prevaricating prestidigitators, philandering physicists and murderous mentalists, all the while unlocking secrets which may be best left undisclosed. And one, in particular, lands very close to home.