Or, at least, that’s what they’ll tell the police…
Published by Orion
Source – review copy
The question is: which one?

The only thing the three women had in common was their husband.
And, as of this morning, that they’re each accused of his murder.

Blake’s dead. His wife killed him. 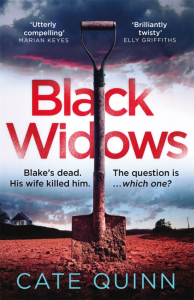 Cate Quinn is a travel and lifestyle journalist for The Times, the Guardian and the Mirror, alongside many magazines. Prior to this, Quinn’s background in historic research won prestigious postgraduate funding from the British Art Council. Quinn pooled these resources, combining historical research with first-hand experiences in far-flung places to create critically acclaimed and bestselling historical fiction.
As the story progresses the reader sees that Blake and his wives did not live an ideal life and that running away from civilisation had not put any distance between them and their past. Whilst his murder makes each wife suspect the other, it also brings them closer together,  more so than they ever were when Blake was alive.
Despite the fact that the family live in out in the desert, with nothing surrounding them for miles, there is a sense of claustrophobia that permeates the book. Blake had his wives prepping for the end of days, Rachel spending her time canning food to see them through the apocalypse. There is nothing to see, or do and the environment feels oppressive. It is also the same for the history of the three women, each one coming from a different, but no less impacting, background, each one leaving scars.
About the Author
An interesting, entertain tale where each protagonist is a suspect and nothing is a clear cut as it seems.
Publication date – 4 February 2021
Blake Nelson moved into a hidden stretch of land – a raw paradise in the wilds of Utah – where he lived with his three wives:
I admit there were places where my attention waned but not enough for me not to want to see the book to it’s conclusion.
The chapters are short and snappy, shifting between each wife. This enables the story to layer, little seeds of doubt regarding each wife sown by the other. It also paints a more rounded picture of Blake, as each spouse sees a different side to their husband.  The short chapters also mean the reader soon finds themselves well into the book.
Rachel, the chief wife, obedient and doting to a fault.
Tina, the other wife, who is everything Rachel isn’t.
And Emily, the youngest wife, who knows little else.
Blake Nelson lives out in the middle of nowhere. When he’s found dead there can be only three suspects. His wives. But is it Rachel, his first wife, Tina the sister wife with a past and Emily, the youngest sister wife who is not always to be trusted. The question is, which wife killed Blake? Blake, Rachel, Tina and Emily are part of the Church of Latter Day Saints, though viewed unfavourably by the church for their polygamous ways. Whilst religion is what draws them together, and runs throughout the book, it is neither preaching or derisive. What the story focusses on as much as the murder is the issue of belief and how it can be a blessing or a curse.
When their husband is found dead under the desert sun, the questions pile up.
But none of the widows know who would want to kill a good man like Blake.