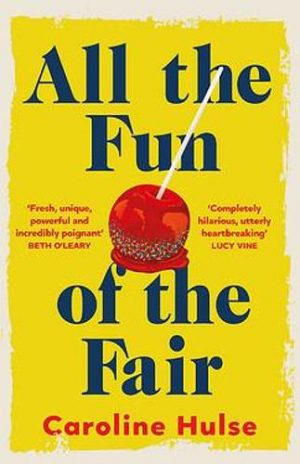 The book is a countdown over 39 days to the fair and chronicles Fiona’s attempts to find out how her sister died, get her parents to agree to let her go; get enough money for rides, and oh, get some friends to go with. Some are easier to do than others, an unexpected find makes her some money however the rest is not so easy, particularly the friends thing. She has one friend Lewis, who she hangs out with (when she hasn’t upset him) but Fiona is one of those girls on their own in the school playground, wanting to be included and trying to avoid the bullies.
A very enjoyable read written with humour but also empathy, seeing the world through Fiona’s eyes, feeling her angst at the injustices she feels, her desperation to get answers and how she goes about it and how eventually she does find her worth. I have a feeling that there is more to come for Fiona though. As to the question of does she get to the fair – you will have to read the book and find out.
This year, everything will be different.
She’s pretended to go – but she’s never been allowed. Because, before Fiona was even born, her sister died there.
As an aside, I did take part in the Orion All The Fun of the Fair Zoom quiz night last week with Caroline asking the questions. Oh boy those questions were hard. I came to the conclusion that I didn’t read any books in the 1990s or watch any TV! 🙈 😂
My thanks to Tracy Fenton of Compulsive Readers for the tour invitation and to the publisher for the copy to review. The story is set during the summer of 1996. When England were playing Germany in the Euro championship (sound familiar?)
Fresh and hilarious, All the Fun of the Fair is a deeply poignant coming-of-age novel from sensational talent Caroline Hulse.
Publisher: Orion
Format: Ebook, Audio (27 May 2021) | Hardback (8 July 2021)
Pages: 416
Source: Copy received for review Caroline Hulse has drawn her characters superbly and made them believable. They are not always very nice to each other, the children especially can be cruel and hurtful. I was particularly frustrated with Fiona’s parents in their refusal to consider Fiona’s feelings about her sister’s death. Danielle’s room is kept as a shrine and she is regarded as a the perfect daughter. Fiona is convinced that she is bad and so she plays up to that by doing things which get her into trouble at school. I did however do a cheer for Fiona’s mother when she put one of Fiona’s soppy teachers firmly in her place. Go Gail!
This is a poignant and humorous coming of age story. Of the difficulty of making friendships and fitting in, how children come to their own conclusions when adults won’t explain and the general innocence of childhood. For anyone who remembers the 1990s in any detail (I’m old enough to) it’s also a nostalgia trip.
All The Fun of The Fair is her third novel.

Caroline Hulse lives in Manchester with her husband and a small controlling dog. Her books have been published in fourteen languages and optioned for television.
Fiona is about to turn twelve – older than her sister was. This summer, Fiona will save some money, make new friends, and finally have some fun at The Fair.
But what she’ll actually do is:

ABOUT THE AUTHORIt’s 1996, summer is coming, and eleven-year-old Fiona Larson is determined to make this her best year yet…

The Fair is the only good thing that happens every year. And Fiona Larson is the only person in town who’s never been.
Fiona Larson, nearly 12 years old, is rather a quirky character but one I couldn’t help feeling a bit sorry for. She likes making lists. She has a Junior Spy’s Secret Handbook which her grandmother bought her; she is obsessed with spying – making spy kits for her coat pocket, trying to solve mysteries…the biggest mystery being how did her elder sister Danielle die at the fair. Her parents won’t tell her, in fact they refuse to discuss it at all. Neither will they let her go the fair – something she is desperate to do.