Published by Doubleday
Recommended.
The end of the war won’t just mean peace, but discovery…
There is a gentle observational  humour that is threaded throughout V for Victory. It lifts the story, showing how people managed to live every day with the threat of bombs or loss or defeat.
It’s late 1944. Hitler’s rockets are slamming down on London with vicious regularity and it’s the coldest winter in living memory. Allied victory is on its way, but it’s bloody well dragging its feet.
Following on from Crooked Heart, Noel and Vee are living together with an assortment of lodgers. Vee is hiding her real identity and making money how she can. She makes sure Noel is educated by ensuring the lodgers have skills in different subjects to cover his learning needs.
As much as this is a story about Vee and Noel, it is also a story about the war and how those at not fighting have to live their lives. There are those women left behind, forging new careers and wondering if they will be able to return to the mundane life after the war ends. There is Winnie, the warden who has worked her way up to supervisor and is left wondering if she wants to return to acting once the war is over. She is also unsure of her relationship with her new husband, married quickly after they met, he went to fight soon after. Winnie comes to dread the letters he sends from his prisoner of war camp, full of minute details of plans he has for their home once he is released. She realises she doesn’t really know the man she has married in haste and wonders how they will find spending their lives together in the future.
Vee is another wonderful character. She has put her life on hold, has become a different person, outwardly at least, to ensure that Noel is safe and can remain in the home bequeathed to him by Mattie Simpson.
Vee and Noel are used to having just each other. They slowly begin to realise that the lodgers are more than that, they are friends, who will be there for them if needed. They are a misfit family, brought together by circumstance but remaining together through choice, and are perhaps, to be treasured all the more for it.
I’ll admit I’ve not read the other books that precede V for Victory. It didn’t spoil my enjoyment of the story as it’s easy to establish how the characters got to the point in their lives where V for Victory opens. It does mean however that I can go back and get to know Vee, Noel and the eponymous Mattie Simpson better. I can’t wait.
Source – review ebook copy
In a large house next to Hampstead Heath, Vee Sedge is just about scraping by, with a herd of lodgers to feed, and her young charge Noel ( almost fifteen ) to clothe and educate. When she witnesses a road accident and finds herself in court, the repercussions are both unexpectedly marvellous and potentially disastrous – disastrous because Vee is not actually the person she’s pretending to be, and neither is Noel.
Noel is a charming character. His attitude and intellect could have made it easy for him to be precocious. However, he is down to earth, protective of Vee and has a pragmatism rare in a teenager. He is aware that his home could be taken from him if the truth about Vee’s identity is revealed but knows that the pretence is the only way he can stay with the only family he has. He is intelligent, soaking up facts like a sponge and feeling the flushes of first love for Genevieve, the girl next door.
Publication date – 24 June 2021
Noel and his aunt Mar live in a big house near Hampstead Heath. Mar takes in lodgers, ones that will be able to educate Noel. One day Mar sees a tragic road accident and is called in as a witness. She knows this could turn her life, and Noel’s, upside down. Because Mar is really Vee Sedge and Noel isn’t her nephew. And the truth could mean the end of their lives together. 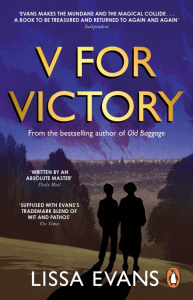 There is a lovely warm atmosphere to this book. You feel like you are joining friends and want to cheer them on. The reader is invested in them surviving their war, and prospering afterwards.