Piers Torday’s novels include The Last Wild, The Dark Wild, The Wild Beyond and The Lost Magician. His latest novel, The Wild Before, was published by Quercus Children’s on 19 August 2021.
But it’s easier said than done, and soon Little Hare realises that he is the only one who can save the world…
as a gentle trickle of flakes soon became a thick flurry.
One stormy, snowy night, a pure silver calf is born on an ordinary muddy farm by the light of the moon. This is the legendary Mooncalf, whose arrival has been foretold since the dawn of time.
He licked it.
About the Book
According to a dream passed down from animal to animal, if the calf dies, a great Terribleness will come – rising seas, a plague, skies raining down fire, the end of all things… and Little Hare vows to persuade all the animals to protect Mooncalf, whatever the cost.
Today I have an extract to share.
*Shelter!* said Run-Hare, standing down. *Everyone to the Bristly Hedge. Now!*
Little-Hare was wondering whether there might be a more romantic way to find a mate, when he felt something unexpected land on his nose.
Oblivious, Bite-Hare rubbed his bruised snout gingerly with a paw. *It doesn’t matter, beautiful,* he muttered to Run-Hare, and then bared his grinding teeth. *I will do anything for your love. Anything.*
White. Freezing white. 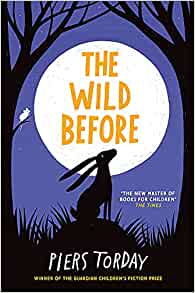 The world was turning stranger and stranger. Last summer had been as hot as the sun itself. And yet, now – it may have been spring, but here it was, unmistakeable and very, very cold –
At first he thought it might be blossom. But it wasn’t.
Bite-Hare and Run-Hare were caught mid-box, their paws raised, when they felt the flakes land on their noses.
Little-Hare frowned at the sky. *Sist-hare? Are these falling flakes what the swallows warned you about?*
No wonder she hadn’t wanted to tell him.
Then he looked around. It was landing everywhere. On the green, the tall-homes and hedgerows, and on the squabbling hares, who paused to stare at the night sky in confusion. What had begun