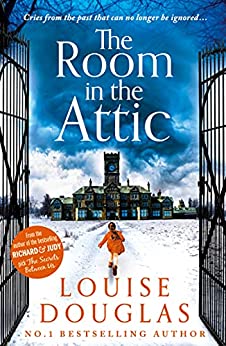 If you like stories set around old asylums, with more than a touch of the supernatural then this is one for you. Flitting between two timelines, 1903 and 1993, the earlier part of the story is told from the perspective of elderly Nurse Emma Everdeen, charged to look after a young girl bought into the asylum, All Hallows, with her mother who was found unconscious. Emma and her young patient are kept locked in the attic, out of the way, their only contact being with another nurse for daily supplies. Emma, still very much feeling the loss of her own son after many years, becomes increasingly attached to the young child and does all she can to protect her.
ABOUT THE BOOKIn 1993, All Hallows is now a boarding school. Following his mother’s death and his father’s hasty remarriage, Lewis Tyler is banished to Dartmoor, stripped of his fashionable clothes, shorn of his long hair, and left feeling more alone than ever. There he meets Isak, another lost soul, and whilst refurbishment of the dormitories is taking place, the boys are marooned up in the attic, in an old wing of the school.
ABOUT THE AUTHORIn 1993, Lewis is sent to All Hallows boarding school by his father, basically as a punishment and to get him out of the way. Following his mother’s death, Lewis is lost and the grim and austere atmosphere of the school certainly doesn’t help. His room mate Isak is in a similar position and a tenuous friendship and understanding begins between them whilst they try to find ways to make their situation more bearable and to beat the system if they can.All Hallows is a building full of memories, whispers, cries from the past. As Lewis and Isak learn more about the fate of Harriet, and Nurse Emma’s desperate fight to keep the little girl safe, it soon becomes clear there are ghosts who are still restless. Are they ghosts the boys hear at night in the room above, are they the unquiet souls from the asylum still caught between the walls? And can Lewis and Isak bring peace to All Hallows before the past breaks them first…
In 1903 fishermen find a wrecked boat containing a woman, who has been badly beaten, and a young girl. An ambulance is sent for, and the two survivors are taken to All Hallows, the imposing asylum, hidden deep on Dartmoor. The woman remains in a coma, but the little girl, Harriet, awakens and is taken to an attic room, far away from the noise of the asylum, and is put in the care of Nurse Emma Everdeen.
Two motherless boys banished to boarding school…
There is so much in this story that will intrigue and absorb the reader. I was constantly being surprised throughout. The hellish and grim atmosphere of the asylum comes over so well with patients being admitted for the most spurious of reasons and even 90 years later it feels as though their stories are imprinted in the fabric of the building.
There is much mystery involving the girl and her mother. Who are they and where have they come from? With no identification, it is a slow process to discover who they really are and Nurse Everdeen gradually tries to coax any information out of her young patient.
Author Links:
The story introduces us to to an adult Lewis in the present day where he is sent, against his wishes, on a work trip to an abandoned All Hallows to carry out a recce on behalf of a client. It is still a forbidding place with bad vibes and he is convinced of a ghostly presence. His fear of the place still hasn’t subsided and he can’t wait to get out of there.
A child who does not know her name…
There is a definite Gothic feel to the story – All Hallows has such a commanding presence over both timelines and the author has set the scene well with vivid descriptions giving a sense of place together with a haunting presence throughout. I thoroughly enjoyed it and would definitely recommend. If you’re easily spooked then I suggest you read with the lights on! 👻
Cries and calls from the past that can no longer be ignored…
Whilst this is a slow burner to start, there are some real shocks in both timelines with much suspense. Lewis and Isak have some disturbing experiences – the supernatural element has been done so well and the old asylum building is not giving up its secrets and ghosts so easily.

I was surprised when looking at Goodreads at just how many books by Louise Douglas that I had read – currently a total of 6 and all but one were 5* reads (one being a 4*). These were read pre-blog days with only one being reviewed here The Secret by the Lake. I couldn’t say no to reviewing The Room in the Attic when the opportunity arose and my thanks to Rachel of Rachel’s Random Resources for the invite and the publisher Boldwood for the Netgalley copy.
Louise Douglas is the bestselling and brilliantly reviewed author of 6 novels including The Love of my Life and Missing You – a RNA award winner. The Secrets Between Us was a Richard and Judy Book Club pick. She lives in the West Country. Louise’s first book for Boldwood, The House by the Sea was published in March 2020.