About the book
I found it quite impossible to put this book down. The Night She Disappeared is a really gripping story, full of twists and surprises, especially as it hurtles towards its nail biting conclusion.
Lisa was born in London in 1968. Her mother was a secretary and her father was a textile agent and she was brought up in the northernmost reaches of London with her two younger sisters. She was educated at a Catholic girls’ Grammar school in Finchley. After leaving school at sixteen she spent two years at Barnet College doing an arts foundation course and then two years at Epsom School of Art & Design studying Fashion Illustration and Communication.I was gripped from the very start of this book. I enjoyed the way it moves between getting to know Tallulah as she attends college in 2016, going through the trauma of her going missing from her mum’s point of view from when Tallulah disappeared in 2017 and Sophie (and Shaun) in 2019.She now lives in an innermost part of north London with her husband Jascha, an IT consultant, her daughters, Amelie and Evie and her silver tabbies, Jack and Milly.My ThoughtsAbout the AuthorIt’s a while since I’ve read a Lisa Jewell book so when I spotted this one on a Kindle deal last month, I made sure to snap it up. I found it a real page turner and read it in just a few days!
Friends tell her that Tallulah was last seen heading to a pool party at a house in the woods nearby called Dark Place.
She has since written a further nine novels, as is currently at work on her eleventh.
She worked for the fashion chain Warehouse for three years as a PR assistant and then for Thomas Pink, the Jermyn Street shirt company for four years as a receptionist and PA. She started her first novel, Ralph’s Party, for a bet in 1996. She finished it in 1997 and it was published by Penguin books in May 1998. It went on to become the best-selling debut novel of that year.
This is a really fast paced as the story switched from one point of view to another. The short chapters keep the plot rattling along and kept me turning those pages! The ominous ‘Dark Place’ mansion plays a role in all parts of the story. It’s a significant and brooding presence, almost a character in its own right.
Tallulah never returns.
A sign that says: DIG HERE . . .

At 11 p.m. she sends her mum a text message. At 4.30 a.m. Kim awakens to discover that Tallulah has not come home.
A cold case. An abandoned mansion. A family hiding a terrible secret. Prepare to be hooked. Lisa Jewell’s latest thriller is her best yet.

Midsummer 2017: teenage mum Tallulah heads out on a date, leaving her baby son at home with her mother, Kim.
Just reading Sophie’s first chapter was so intriguing. What did she recognise about the ‘Dig Here’ sign that gave her such a strong sense of déjà vu? It’s rather like a darker version of Alice in Wonderland. Sophie is a cosy crime novelist and gets really caught up with the story of the disappearance, digging away herself, metaphorically speaking, until she uncovers more clues.
2018: walking in the woods behind the boarding school where her boyfriend has just started as a head teacher, Sophie sees a sign nailed to a fence. 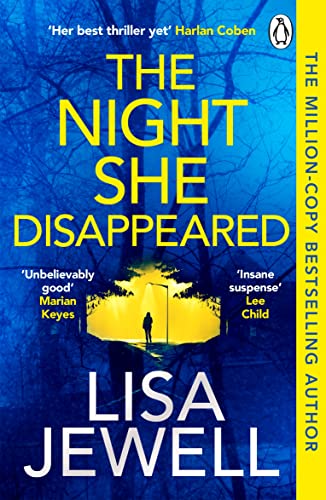