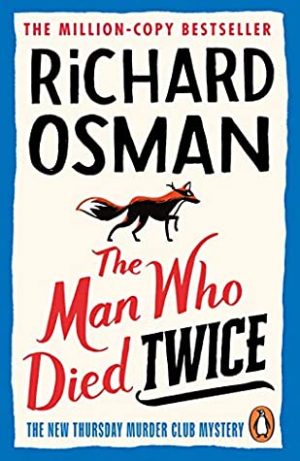 Elizabeth has received a letter from an old colleague, a man with whom she has a long history. He’s made a big mistake, and he needs her help. His story involves stolen diamonds, a violent mobster, and a very real threat to his life.

MY THOUGHTS
ABOUT THE AUTHORIt’s the following Thursday.My thanks to Ellie of Penguin for the tour invitation and the proof copy to review. I loved the first book in the series, The Thursday Murder Club and jumped at the opportunity to review the Man Who Died Twice.

Other reviews
DCI Chris Hudson and PC Donna De Freitas also return – I love this pairing almost as much as the four main characters – life has improved somewhat for Chris – he has found love, much to Donna’s disgust, not that she had designs on him. It’s who he has found it with that bothers her.
The previous book hinted at Elizabeth’s past – this time her former career is out in the open and when she receives a letter from someone in her past, MI5, ruthless hitmen, mobsters, £20million of stolen diamonds and all kinds of shenanigans are involved.
Can the Thursday Murder Club find the killer (and the diamonds) before the killer finds them?
The Thursday Murder Club (2020) – Richard Osman
It was an absolute joy to meet up again with these four residents of Coopers Chase retirement village – a former spook, a retired nurse, a retired psychiatrist, and an ex trade union leader – all with diverse backgrounds and personalities but put them together and their crime solving abilities are second to none.
There was so much to like about this book, I thought it was even better than the first with the storyline being rather more meaty and complex with Elizabeth pitting her wits against the might of the secret service and all four Club members getting involved in subterfuge and cunning to thwart the bad guys and try and find the diamonds. There was just as much humour throughout especially with Joyce who had a bit more of a higher profile in this adventure; she again narrates some of the chapters via her journal and provides some comedic moments including her innocence with Instagram and a new obsession with friendship bracelets but there were also the more poignant and reflective moments too with sensitivity being shown to themes such as dementia where friendship and support is very much in evidence.

Follow the author:
Richard Osman is an author, producer, and television presenter. His first novel, The Thursday Murder Club, was a #1 million-copy international bestseller. Critics have already described The Man Who Died Twice as “his second novel.” He lives in London.

As bodies start piling up, Elizabeth enlists Joyce, Ibrahim and Ron in the hunt for a ruthless murderer. And if they find the diamonds too? Well, wouldn’t that be a bonus? But this time they are up against an enemy who wouldn’t bat an eyelid at knocking off four septuagenarians.ABOUT THE BOOK I so enjoy reading about their adventures – this may be on the lighter side of crime but it certainly has energy and bite and just as importantly is written with warmth and humour.
This was another superb fun and entertaining read. I can’t wait to see what they get up to next.