2. What inspired the book?
3. Are you a plan, plan, plan writer or do you sit down and see where the words take you?
I’ve always wanted to write a thriller centred around a complex friendship group. For a long time I struggled to find the reason their friendship had fallen apart but when I finally did everything clicked into place and I just had to write it. I wrote the first draft of the book five years ago. It has been a long journey for the story.
I always have a guideline that I work to. I tend to plan chapter by chapter and know key events that will happen within a story. That being said, I do tend to deviate from that as sometimes characters take you in a direction you didn’t expect. But generally everything is planned out. I know how a book will end before I’ve even started writing it.
4. Having been through the publishing process a few times, is there anything about the process of creating a novel that still surprises you?
Carys kindly answered a few of my questions.
It would have to be Flowers in the Attic. So gripping, so dark, so unique. It is a story I can read over and over.
When Gail invites the increasingly estranged friends to reunite at her Scottish cabin, it could be the opportunity to mend old wounds and heal the cracks in their friendship. But when a freak snowstorm rocks the cabin and one of the girls is found dead on the ice, their weekend away becomes a race against time – and each other – to get off the mountain alive.
Carys Jones is the author of We Are All Liars which was published by Orion on 9 December 2021.
7. I like to end my Q&As with the same question so here we go. During all the Q&As and interviews you’ve done what question have you not been asked that you wish had been asked – and what’s the answer?
1. Tell us a little about We Are All Liars.
About the Book
No one has asked what I found hardest about writing We Are All Liars. And the answer would be the ending. Mainly because I kept building on it too much. There were scenes which didn’t need to be there which I kept fighting for during the editorial process. I know they were right to go but I miss them and have saved them in a secret folder on my laptop (clearly I’m not over letting them go, lol). I cared so much about the Fierce Five in the story that I didn’t want to stop spending time with them, even when it was time to let them go.
5. What do you do when you aren’t writing? What do you do to relax and get away from it all?
Allie, Stacie, Diana, Emily and Gail have been by each other’s sides for as long as they can remember. The Fierce Five. Best friends forever. But growing up has meant growing apart. And little white lies have grown into devastating secrets. 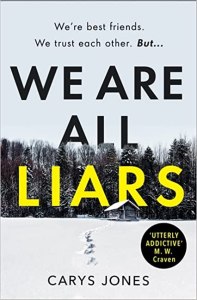 Being a writer is such an ongoing evolution. I feel like I’m forever striving to do better, to create the best story that I possibly can. And for me the process remains as special as it was right at the start. There’s a magic to starting a new book, and also finishing one. The journey to creating a book remains full of surprises and I love that about it.
6. If you could only read one book for the rest of your life which book would it be?
We Are All Liars is a standalone thriller about five friends who have drifted apart in later life but come together for a birthday celebration at a remote Scottish cabin. When a snow storm sets in they are trapped and with nowhere to go they are forced to confront their difficult past. Not everyone is going to get off the mountain alive…
Disney! I’m a huge Disney fan. If I’m not watching one of my favourite films I’m planning my next holiday. I recently went on the UK Staycation Disney Cruise which was just incredible. Being at Disney is so immersive and enchanting it definitely enables me to switch off and get away from it all.
And in the end, whose story can you trust, when everything was founded on lies to begin with?