1.         I was born in Dorset in 1945. Naturally I don’t remember anything about the war, but I do remember rationing and seeing my first ever banana. Twenty years on, I still love them.
9.         Peter was the reason I became a spy. But now I find the excitement is like a drug. Even if he were released tomorrow, I don’t know if I could go back to my old life. I wanted to see the world, and I’ve certainly done that, from Argentina to Romania, the Swiss Alps to Beirut. I’ve also had to steal, spy, lie and kill.
Buying link: What About the Girl
3.         Like all my friends, I couldn’t wait to move to London. Mary Quant, Vidal Sassoon – it’s where everything happens. My first job was as a waitress in an American-themed café in Soho. We were all on roller-skates and whenever you dropped anything, everyone cheered. I was so embarrassed the first time, but after that I loved it.
7.         My spying career started with me providing cover for Peter when he went to meet his contacts. He always said a couple were much less conspicuous than a man on his own. Soon I was going with him behind the Iron Curtain. Then it all went wrong.
The Clemency White books are published by in paperback by Asp and they have kindly offered readers of the blog the chance to win a set of the books. For your chance to win, just tell me who your favourite fictional spy is. UK entries only please, and enter by midnight (UK time) on Friday 9th July. If you are the winner, I will need your postal address to pass on to the publishers who will dispatch your prize.
The novels have a strong and engaging female lead with plenty of thrills and actions, and are described as an inversion of the traditional spy novel, with the female love interest (“Bond Girl”) taking the lead.  The series has the same glamorous 60s settings and themes of women’s place in society as The Marvellous Mrs Maisel and The Queen’s Gambit. These books will be popular with readers of crime and thrillers who want something different but still with emotion and jeopardy.  They are spy and espionage fiction giving an exciting read that isn’t all guns and gadgets.
6.         I loved living in London. But I also wanted to travel, and I find languages easy to pick up. A friend got me an interview with the Foreign Office, training as a cypher clerk. Six months later I was at the British Embassy in Berne. That’s where I met Peter.
8.         I haven’t seen Peter for three years. He’s in the hands of the KGB. I’ve never completely trusted MI6 to get him back, which is why I volunteered to keep working for them. Well, blackmailed them, to be honest.
Buying link: The Girl Knows Nothing
I was very intrigued to hear about the Clemency White books written by KT Cavan. KT Cavan is a pseudonym used by an author due to their current role within the intelligence and security agencies. In keeping with the secrecy theme, I suggested they might like to share #TenThings about their character, Clemency White. What About the Girl and The Girl Knows Nothing are available now and a third book in the series, Come Spy With Me, will be published soon.
The Girl Knows Nothing
4.         My favourite band is the Kinks. I saw them live at the Beat Club, just before they became famous. So much better than the Stones!
Ten Things about the character Clemency White
What About the Girl
2.         I had a really happy time growing up in the country. My favourite thing was to go into the local woods at night to watch the foxes and the badgers. I learned how to move without making a sound – though I never dreamt I’d be using those skills for Queen and Country.
5.         The same week I met Laurence Olivier. By then I was working in a theatre as an assistant dresser – the lowest of the low. You were only allowed to put out the shoes. But he did once say thank you to me.
10.       My next mission is to Ireland, about which I know absolutely nothing. My boss at MI6 assures me it will be a holiday. I wonder…
Berne, 1962. When Clemency is asked to help Peter Aspinal pick up some film from one of his agents, she jumps at the chance. It’s a welcome change from her routine desk job at the British Embassy. Peter himself is the kind of charming, cultured and slightly dangerous man a girl could fall for. But then the romance turns to terror as the KGB move in. Cut off from help in the Alps, Clemency finds she has hidden skills and courage. But will it be enough to save her and Peter from elimination by their ruthless opponents? First in a series featuring Clemency White, a cypher clerk in the Foreign Office who ends up as one of MI6’s top agents
Clemency flies to Argentina to help handsome and ruthless secret agent Hal Linklater track down three fugitive Nazis. But as their quest takes them from the tango bars of Buenos Aires to the wind-swept plains of Patagonia, Hal keeps Clemency in ignorance of the real reason why these three men matter so much. He says the less she knows, the safer she is. But as the hunters become the hunted, would knowing the truth help save her life? Or plunge her into greater danger? Sequel to What About the Girl? which introduced Clemency White, a cypher clerk in the Foreign Office who ends up as one of MI6’s top agents. 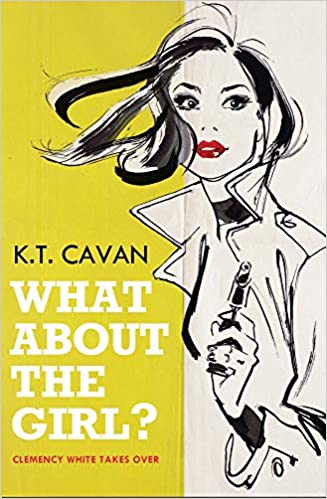