Today I’m sharing my thoughts about The Twenty Seven Club by Lucy Nichol, a story of music and friendship in the 90s. My thanks to the author for the review copy of the book.

The 27 Club is a nostalgic, often humorous, drug and booze-infused tale of friendship, discovery and anxiety as Emma tries, for once, to focus on life, rather than death.

It’s 1994. The music industry is mourning Kurt Cobain, Right Said Fred have re-emerged as an ‘ironic’ pop act and John Major is the country’s prime minister. Nothing is as it should be.
I enjoyed Lucy Nichol’s dry wit and some of the situations that Emma found herself in made me laugh. Ultimately though, this is a story about mental health and the toll the past can take on a person. Set in the 1990s, it’s the death of Kurt Cobain that triggers Emma’s worries. If you were around in the 90s reading this book will give you a trip down memory lane both musically and through the many cultural references. Anybody fancy a Diamond White in front of a video from Blockbusters later?
Like Loading…
Emma is hurtling towards her 27th birthday, riddled with anxiety that her idols Joplin, Hendrix and Morrison all died aged 27, and now Kurt Cobain has gone too. Will Emma be next to join The Twenty Seven Club?
Why have so many legendary musicians gone aged 27? Is there a link between the members of the so-called Twenty Seven Club? Is this why her mum had an affair and left them? And could Emma be about to join The Twenty Seven Club too?

Emma, a working-class rock music fan from Hull, with a penchant for a flaming Drambuie and a line of coke with her best mate Dave down The Angel, is troubled. Trev, her whippet, has IBS, and her job ordering bathroom supplies at the local caravan company is far from challenging. So when her dad, Tel, informs her that her music idol, Kurt Cobain has killed himself aged 27, Emma is consumed with anxiety.

I found The Twenty Seven Club to be a thoughtful read about a young woman dealing with everyday life, sometimes struggling, a little damaged and self-destructive, but also relatable, against a backdrop of 1990s Hull and the music scene.

Emma and her best mate, Dave, like to spend their evenings living dangerously down the local pub, The Angel. Not exactly rock and roll but they like it. This book is like reading Emma’s inner monologue, following her between The Angel, Spiders nightclub, work and her dad’s, with walking her dog, Trev, thrown into the mix. It’s quite introspective, full of her anxious, drug and alcohol fuelled musings. It made it feel quite intense at times but then there were bursts of humour to balance it out. I must admit I found it hard to take to Emma but a lot of her issues became clear towards the end of the book and it became easy to understand where her anxiety  came from.

Lucy is a writer and PR consultant whose work has appeared in The Independent, The I Paper, NME, Red Magazine, Den of Geek, Huff Post and many more. She is also a former columnist with Sarah Millican’s Standard Issue magazine and ooccasionally interviews guests for the Standard Issue podcast. She is passionate about challenging mental health and particularly addiction stigma, has worked with the media in PR and marketing for over 18 years and has experienced anxiety for even longer. 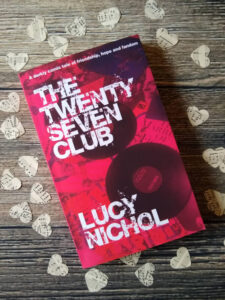 Why do so many rock stars die aged 27? The 27 Club is actually a thing, one that had passed me by. Our protagonist, Emma, is almost 27 and whilst she isn’t a rock star, she is worrying endlessly about whether her time is almost up. Why does it only affect some people? After all, her dad is still going strong. Mind you, maybe her mind-numbing job selling caravans might finish her off. I really enjoyed her interactions with her colleague, Claire. Like many people you end up working with, they don’t have much in common but they’re great together.