The Midnight House by Amanda Geard will be published by Headline Review on 12th May in hardcover, eBook and audiobook. My thanks to Emily Patience for the proof copy of the book.
An unforgettable and spellbinding story of secrets, war, love and sacrifice, perfect for readers of Kate Morton, Eve Chase and Louise Douglas.
2019: Decades later, Ellie Fitzgerald is forced to leave Dublin disgraced and heartbroken. Abandoning journalism, she returns to rural Kerry to weather out the storm. But, when she discovers a faded letter, tucked inside the pages of an old book, she finds herself drawn in by a long-buried secret. And as Ellie begins to unravel the mystery, it becomes clear that the letter might hold the key to more than just Charlotte’s disappearance. 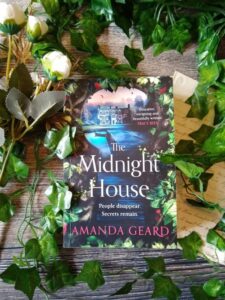 My imagination was immediately captured by the inky image of a lake and a house beyond it on the cover of The Midnight House. I started to wonder what secrets it could hold. Well, quite a few as it happens. This is a triple timeframe story with family intrigue from 1940 and 1958 rippling down into the present day storyline in 2019.

Born in Australia, Amanda Geard has lived all over the world, from a houseboat in London to a Norwegian Island, before settling in County Kerry in Ireland. Her writing has appeared in The Irish Times, The Journal, writing.ie, Nordic Reach and Vertical Magazine. Her short story Not Yet Recycled won the New Irish Writing Award in October 2019.

1940: In south-west Ireland, the young and beautiful Lady Charlotte Rathmore is pronounced dead after she mysteriously disappears by the lake of Blackwater Hall. In London, on the brink of the Blitz, Nancy Rathmore is grieving Charlotte’s death when a letter arrives containing a secret that she is sworn to keep – one that will change her life for ever.

There’s a family tree at the beginning. I was excited by this and envisaged lots of turning back to see who everybody was. In fact, I didn’t need to do that. Ok, there weren’t a huge amount of people to keep track of but I think it was more because the characters were so beautifully portrayed and realistic. I was totally invested in their lives, both the main players and also the more minor characters, such as the owner of the little coffee shop that Ellie frequents.
My Dearest T, Whatever you hear, do not believe it for a moment…

If, like me, you’re a Kate Morton fan waiting for her to write her next book then look no further than The Midnight House. Amanda Geard has written a captivating debut encompassing a mystery which unfolds between the covers, family secrets and female friendship in a spellbinding setting. I absolutely loved it.

This is exactly my kind of book. As is usual, initially I was most interested in the storyline in 2019, and I was fascinated and enthralled by the digging that Ellie does into the past and the way that it was revealed. But, as the story progressed, I found myself becoming just as engrossed in the other two strands, set in the past, and I found it was like I was putting together a jigsaw, with it all starting to make sense as more pieces were gathered. I loved that sense of collecting and collating memories and facts to build a picture of the past.

Ellie Fitzgerald is running away from a scandal in Dublin in 2019 and she retreats to her family farm in Ballinn, County Kerry. There, a letter found between the pages of a book lead her to investigate the disappearance of Lady Charlotte Rathmore in 1940 from the grounds of nearby Blackwater Hall.