1986. Dougie Munro, searching for adventure, leaves the Isle of Harris – the island of his birth – for art college and a career in London as a photographer.

1969. Florence Lawson, a 16-year-old schoolgirl who dreams of being an artist, finds herself pregnant and banished to one of the most remote parts of the UK.

Little Wing is the powerful story of two families over three generations.

Like Loading…
Freya North is one of the UK’s bestselling writers. Her first novel, Sally, was published to great acclaim while she was still in her twenties. Her subsequent books have all been bestsellers. In 2008 Freya North won the RNA Book of the Year award with Pillow Talk. Across all books and formats, Freya North has sold over two millions books to date.

The writing in Little Wing is absolutely exquisite and the story is stunning. It’s a lump in the throat read and I did properly cry once or twice. There is so much empathy and emotion in the writing that I truly felt what Florence, Nell and Dougie were feeling. This touching story of home and family, and what it really means, should not be missed. 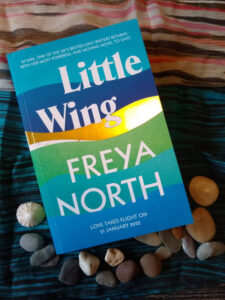 Little Wing is Freya North’s first novel in seven years and it is an absolute triumph in every way. It’s been far too long since I last read one of her books (I still have my original copies of Sally, Chloe, Cat et al) but after reading Little Wing I’ve definitely been left wanting to read more from this talented writer.

This is the story, primarily, of three people: Florence, Dougie and Nell. Florence’s story takes place in 1969 when she becomes pregnant and is sent to Harris, the remote and starkly beautiful island in the Outer Hebrides. Nell’s and Dougie’s stories take place in 2005 when Nell finds out something that rocks her whole world, and Dougie realises that the path he has chosen in life is taking him further and further from who he really is.
The three stories collide perfectly, bringing together the past and the present. For Nell it’s a seismic event, and for Dougie it’s more a gradual realisation, but I thought the plotlines were woven together magnificently. This is not a book of surprises for the reader but a tender story of family and finding your true place in the world.

Today I’m sharing my thoughts on another wonderful January publication, Little Wing by Freya North. It will be published by Welbeck on 20th January and my thanks go to the publishers for my proof copy of the book for review purposes.
2005. Nell Hartley, content with her life managing a care-in-the-community cafe in Colchester, discovers a shocking truth about her family.

Between the sprawl of London, suburban Essex, and the wild, unpredictable Outer Hebrides, three lives collide and interweave as questions are asked and secrets surface. What happened to Florence? Why is Dougie now so reluctant to return home? How can Nell make peace with the lies she’s been told?

The settings are vividly portrayed. Nell works in a café with wonderful staff and it felt like a place I’d love to visit. She also calls regularly on a man in his 80s called Frank and her friendship with him felt so warm. But the setting that jumps off the page at the reader is that of Harris. It’s clear the author has a love of the island as this book is almost a love letter to it and I was completely captivated by its rugged charm throughout the whole book. It’s as good as a character in its own right and is such an integral part of the story. I want to go there right away!

Little Wing is a novel about resilience, forgiveness and the true meaning of family, about finding one’s place in the world and discovering how we all belong somewhere and to someone.