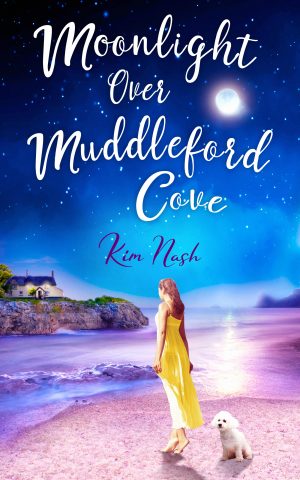 Kim Nash is an author of uplifting, funny, heartwarming, feel-good, romantic fiction.
When thirty-four-year-old Nellie Wagstaff loses her job and discovers her fiancé is a cheating scumbag in a single day, she feels like the world has come crashing down. And that’s before the solicitor’s letter, along with a request to visit a place she hasn’t thought about for a very long time.
Her latest book, Sunshine and Second Chances, was shortlisted for the 2020 Amazon Kindle Storyteller Award. She lives in Staffordshire with son Ollie and English Setter Roni, is Head of Publicity for Bookouture and is a book blogger at www.kimthebookworm.co.uk.
Nellie will never know why her mother and aunt parted ways. She’ll sell the house, forget about Jack, and get back to real life. Because there’s nothing for her in Muddleford… is there?
This was a delightful and charming read of friendship, making peace with the past and facing new beginnings. It was filled with much humour and heartwarming moments juxtaposed with themes of loss, misunderstandings and anguish. There is a myriad of characters – some that are so engaging, such as Nellie – capable but still vulnerable. Her best friend Shivani – a livewire but with common sense and advice who wasn’t adverse to giving Nellie a metaphorical kick up the backside when needed, and the community spirit that comprises Muddleford. There are of course those who are not as wonderful and may make you roll your eyes! Finally there is Norman. Norman you stole my heart!

I thoroughly enjoyed my time in Muddleford. Kim’s writing had perfect pace, combined with superb characters who felt so authentic and a plot that completely drew me in until the final page turn. Definitely recommended.
Kim won the Romantic Novelists Association’s Media Star of the Year in 2016, which she still can’t quite believe. She is now quite delighted to be a member of the RNA. When she’s not working or writing, Kim can be found walking her dog, reading, standing on the sidelines of a football pitch cheering on Ollie and binge watching box sets on the TV. She’s also quite partial to a spa day and a gin and tonic (not at the same time!) Kim also runs a book club in Cannock, Staffs.
Jack, now a devilishly handsome vet, has the local pet owners swooning over him, and as Nellie and he become close once more, and she gets used to gossiping with the locals and sipping wine at her beach hut with sand between her toes, she’s sure she can feel sparks flying once more. But just as she thinks she might be able to open her heart again, her newest frenemy, the glamourous Natalia, tells her a secret about Jack that changes everything.
Poor Nellie. Her introduction to the story is rather rubbish for her after losing both her fiance and her job all at once. However unexpected events leads her to travel to Dorset and, in particular, back to Muddleford – somewhere that is very familiar to her.
I really felt for Nellie as she tries to adjust to a whole range of feelings and decisions that had to be made, including loss, and regret for those things we do, or don’t do in life and which is now too late. There is one consolation however, being back in Muddleford she is thrown into contact again with Jack, her younger self crush, now a dashing and successful vet who seems as pleased to see her as she is him. However as Nellie and Jack slip into their old easy teasing ways with each other it seems that Jack is not being entirely honest.
AUTHOR LINKS:
My thanks to Rachel of Rachel’s Random Resources for the place on the tour and for providing the digital copy to review.

ABOUT THE AUTHOR
I have a confession. I have bought Kim’s previous books although this is the first that I’ve actually got around to reading. And such a lovely read it is.
Heartbroken, Nellie escapes to the beautiful seaside town of Muddleford in Dorset, where she discovers she’s inherited more than she ever bargained for. Nellie never knew why her mother stopped talking to her sister, but now childhood memories of Muddleford come flooding back: long hot summers, the sea glistening beyond the sandy cove… and a stolen kiss with a boy called Jack.
Sign up to be the first to hear about new releases. Your e-mail will not be shared with anyone else and you will only contacted about Kim’s books.
An utterly uplifting and completely hilarious summer read about learning to trust yourself and of finding love and friendship in the least expected places for fans of Jessica Redland, Heidi Swain and Holly Martin.