Whilst I didn’t fall instantly head over heels in love with Lessons in Chemistry I am glad I read it. It slowly crept up on me, the fact I was enjoying spending time with these characters and see them gain a clarity and happiness, in whatever form they found it.
It was a joy to watch the relationship develop between Elizabeth and the people who come into her life. Harriet, her neighbour, is an unhappily married, unfilled woman who has accepted she will be with her uncouth husband until one of them dies. However, when she meets Elizabeth she starts to have a life of her own, to feel connected to people in a way she is not connected with her own family. Elizabeth alters the lives of those she meets, unintentionally in many respects. She infuriates Donnetti, the head of the lab she works at, because she is cleverer than him and won’t fall for his charms. She allows Walter Pine, the director of Supper at Six, to grow, to come out from behind the cruel shade of his boss, to realise that his unconventional family of him and his daughter Amanda, is just as valid as one with a wife and 2.4 children. She allows Wakey a minister and pen friend of Calvin’s to accept his questions of faith as being part of him. And she allowed Calvin to finally have that which he craved the most, someone to love. In return, all of these people give Elizabeth that which she has been searching for her whole life, acceptance that she can be who she wants to be.
Elizabeth is a character that stays with the reader long after the final page has been turned. It is easy to see why people become bezotted.
Like science, life is unpredictable. Which is why a few years later, Elizabeth Zott finds herself not only a single mother, but the reluctant star of America’s most beloved cooking show, Supper at Six. Elizabeth’s unusual approach to cooking (‘combine one tablespoon acetic acid with a pinch of sodium chloride’) proves revolutionary. But as her following grows, not everyone is happy. Because as it turns out, Elizabeth Zott isn’t just teaching women to cook. She’s daring them to change the status quo.
Publication date – 5 April 2022
Published by Doubleday
But it’s the early 1960s and her all-male team at Hastings Research Institute take a very unscientific view of equality. Except for one: Calvin Evans, the lonely, brilliant, Nobel-prize nominated grudge-holder who falls in love with – of all things – her mind. True chemistry results.
Elizabeth Zott is a scientist. She is certainly not someone who should be the host of a TV cookery show. But circumstances, mainly chauvanistic men, have led to her needing to earn money and so she finds herself the star of Supper at Six. But if she’s going to be a TV cook then she’ s going to do it her way, with chemistry. She’s going to start a chain reaction that challenges the role of women in the 1960s.
There are many bittersweet moments in Lessons in Chemistry but there are many more uplifting moments, instances that make the reader smile or laugh. Gentle humour and the sense of finding oneself, of a family created and not bequeathed, of becoming comfortable in who you are and refusing to be who society expects you to be suffuse the pages.
The characters (well the majority) are likeable, warm individuals who all bring something to the story. The ones we aren’t supposed to like are very unlikeable. Elizabeth and her ways are endearing rather than annoying, which is a fine line to walk when dealing with characters with definite personality traits. She is how she is partly because of her upbringing and partly despite it. A set of unorthodox (and criminal parents) means she was mainly raised by her elder brother, educating herself in the process. She is used to being an outsider, but that doesn’t mean she accepts it. It is the 1950s and 60s and she does not believe that her place is in the kitchen, unless it’s to explain the wonders of science in the everyday. Elizabeth, and many women like her, and unlike her for that matter, have to face the facts that the world is designed for men. Their hopes and dreams are encouraged or crushed at the whim of those in charge.
I’ll admit I didn’t fall in love with the book during the first half. I had seen reviews saying that readers had found it humorous from the start but there are issues and incidents that Elizabeth has to face that are the opposite of humorous. It does however, have that lightness of touch and pleasantly surreal feel to it from the beginning. The issue falls more with me and the mood I was in for funny from the off. I didn’t want to give up on the book though, a sign I was invested and I’m glad I persevered.
Source – review copy
She refuses to use her looks to get by. Her most powerful tool is her brain and she is determined to be recognised for it. She is also determined that her daughter does not feel compelled to comply with the pre-existing ideals of girls and women of the age. She is determined that the women who watch her cookery show are aware of how important they are, how important their dreams are and that they can do more with their lives if they wish to. 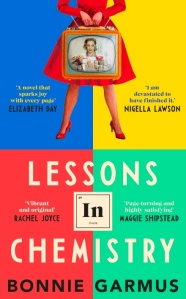 Chemist Elizabeth Zott is not your average woman. In fact, Elizabeth Zott would be the first to point out that there is no such thing.
There are ups and downs in Elizabeth’s life and without spoiling the story, it’s fair to say the downs are hard hitting and would crush many. Elizabeth fights. Fights against her past, against the patriarchy and against society’s expectations of women. She has a child, Mad, out of wedlock, is proud of the fact she is not married, almost unheard of in the 1950s. She refuses to be shunned, to believe that conventions such as marriage are obligatory or necessary to make a woman happy.