Skip to content
And then there’s plot, or rather lack thereof. What even happened?? Not much apparently, and this is coming from a reader who normally likes books that explore the human condition without much of a palpable storyline. Exciting Times though just feels like a nonsensical indulgence for the author that really didn’t have much of an impact at all.
“You keep describing yourself as this uniquely damaged person, when a lot of it is completely normal. I think you want to feel special – which is fair, who doesn’t – but you won’t allow yourself to feel special in a good way, so you tell yourself you’re especially bad”
What’s more, it seemed odd to me that a book set in Hong Kong should only have one Asian main character, and having read reviews from other people who’ve read this, it seems the side characters in this book do nothing more than project two-dimensional stereotypes. Far from providing interesting and complex personalities, Dolan’s cast of characters just fell flat for me – boring and unlikable, I barely had much of a reason to keep reading.
Title: Exciting Times
Author: Naoise Dolan
Type: Fiction
Published: 2020
Pages: 275
TW: Infidelity, Racism, Homophobia
This book wasn’t even bad in a way that makes me exciting to write a bad review; it just didn’t make me feel anything, good, bad, or otherwise! In conclusion, I wouldn’t recommend this, though perhaps if you are a Sally Rooney fan then this will be one for you, just not me!
As an English Language graduate, I really appreciated the way Dolan spoke about language in this book; Ava’s job, to me at least, was fascinating and probably ended up being the most alluring thing about her. As a person on the other hand, I never found myself warming to Ava and as a result just didn’t really care about her life or the love triangle she found herself in. Julian also was thoroughly unlikable and even Edith, probably the most likeable of the three, feels nothing much more than a plot device to help Ava develop as a character.

Exciting Times has been marketed as a book to give Sally Rooney’s Normal People a run for its money, so in hindsight I should have known I wouldn’t like it… Its protagonist Ava moves from Dublin to Hong Kong to teach children English. While there, she meets Julian, and over the course of some months they begin sleeping together but don’t actually commit to a formal relationship. When Julian leaves for a job in London and Ava meets Edith, someone who makes her feel all the things Julian never could, the choice should be easy. But when he suddenly returns, Ava finds herself unable to decide between them… 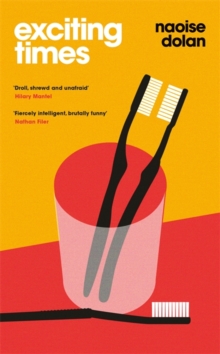