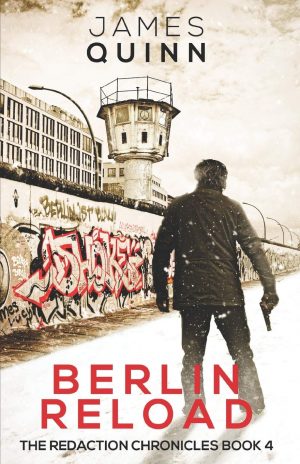 ABOUT THE AUTHOR
8.         I always let one of my children write the last line of my books before I send it off to the publisher; it’s our little family tradition. 2.         I love fast cars and the whole driving experience.  My dream car would be a 1968 Mustang Fastback similar to the one Steve McQueen drove in the movie Bullitt.
10.       I love to travel!  It’s like breathing to me.  I’ve been lucky to travel all over the world for work – Europe, Asia, America, the Middle East –  and I’ve seen some amazing places and met some truly wonderful people.
7.         I once stood next to David Walliams in a taxi queue in London and was briefly introduced to Frederick Forsyth.
His next projects are “Clandestine” – a short story anthology, based around espionage, deception and intrigue – and The Fisherman, which introduces a new character to the world of covert intelligence.

Publisher: Terminal Velocity – A Next Chapter Imprint
Format: Ebook, Hardcover, Paperback (28 April 2021)
Page Count: 326
9.         I once learned how to use a bullwhip for a fancy dress party; I was going as Indiana Jones.
1.         My favourite espionage book of all time is The Honourable Schoolboy by John Le Carre.  I still have my original copy from when I was a teenager and it’s been all over the world with me.

“The time of reckoning is here, Gorilla Grant.” Jack “Gorilla” Grant, retired assassin and former spy, is living a new life as a peaceful, successful businessman. But when his daughter is kidnapped in Rome, it is just the opening gambit in a series of events that pushes him back into the “Redaction” business that he once walked away from. Unseen forces are moving against Gorilla and dangerous enemies from his past are threatening his future, intent on turning a cold war into a hot war. But Gorilla has one rule; don’t mess with my family. And he’s willing to kill to enforce it. From the dangerous streets of 1960’s Berlin to a hit contract in Austria, and finally to a race against time in East Germany, Berlin Reload is an epic cold war spy story that spans the rise and fall of the Berlin Wall, and throws James Quinn’s anti-hero Gorilla Grant into a mission where he may have to decide between the life of his daughter and the dawning of a new conflict between East and West.
3.         I own a first edition copy of The Man with the Golden Gun which I picked up for .50p at a school fair book sale!!  Bargain!
James Quinn is the author of the “Gorilla Grant” series of spy novels. A professional security consultant and corporate intelligence operative, he currently resides in the UK but likes to travel extensively around the globe.
4.         I am a trained close protection officer, covert surveillance operative, kidnap & ransom consultant and close quarter combat instructor.  Most of my adult career has been operating in the secret world of intelligence gathering and security.
TEN THINGS ABOUT ME – JAMES QUINN

My thanks to Anne Cater of Random Things Tours for the invitation to take part in the tour. Berlin Reload, a Cold War Espionage Thriller, is book number 4 in the series (The Redaction Chronicles).
5.         I wrote my first book in my early forties.  So it is never too late to start – if I can do it, anybody can do it.