Three couples. One midsummer’s night. Can everyone get their happy ever after?
And then there’s Lorna and Saif. The local headmistress and the GP desperately keeping their relationship a secret to protect his sons. But while they’re looking out for the boys, who’s looking out for them?
So as I said at the beginning, An Island Wedding is just wonderful. Go and buy it, you’ll thank me!
On a remote Scottish island, three couples are tying the knot – but even in paradise, nothing is plain-sailing...
About the bookOh you wanted more than that for a review? Okay then. First, let’s read about the book and then I’ll tell you what I enjoyed so much about An Island Wedding.Jenny Colgan (born 1972 in Prestwick, Ayrshire, Scotland) is a writer of romantic comedy fiction, sci-fi and has written for the Dr Who line of stories. She writes under her own name and using the pseudonyms Jane Beaton and J. T. Colgan.My Thoughts
An Island Wedding will be published tomorrow in hardback, ebook and audiobook by Sphere Books. My thanks to the publishers for the opportunity to read an early copy through Netgalley.
Flora is trying – and failing – not to let Olivia and Anthony’s wedding distract her from planning her own big day with Joel. But the couple have wildly different ideas about how to celebrate and somehow, just when their relationship should be plain sailing, everything is suddenly very hard indeed.
I love the island setting of Mure. I feel like I know the island so well from the Seaside Kitchen café, to the Rock Hotel, from the Harbour’s Rest Hotel, to the lighthouse and the Endless Beach. It’s a community Jenny Colgan has brought vividly to life for me. I’ve loved getting to know all the inhabitants and I really hope that we pay a return visit before too long. I love the island and all the characters that Jenny Colgan has created. The romance, laughter, drama and emotion – what more do you need in a book?
As the title suggests, love is in the air on Mure as two couples, Flora and Joel and Olivia and Anthony, plan quite different weddings. Another more secretive relationship between the island doctor Syrian refugee Saif and headteacher Lorna is a much more complicated affair. This particular relationship moved me so much as Saif faced some very difficult situations and had what seemed like impossible decisions to make.
Jenny Colgan writes so brilliantly about relationships of all kinds and doesn’t shy away from the difficulties that people sometimes encounter. Her characters are expertly drawn and feel very realistic. For me reading this book after already visiting Mure in previous books, it was like meeting up with old friends and finding out what had happened to them in between our last catch-up. However, even if you haven’t read any of the Mure books you could read this as a standalone, greatly helped by a quick resume of previous main points the author helpfully adds at the beginning of the book.
There is a lot that made me laugh in this book – Gaspard’s outbursts in the kitchen for a start – and Jenny Colgan brings that lightness of touch to all her books, even though some serious issues are included. I have to mention young Agot who would no doubt infuriate me if I knew her for real but is absolutely hilarious! And there are a few characters who you might love to hate initially (I’m thinking Jan and Olivia) but who change over the book and who you will grow to like too.
About the Author
An Island Wedding is just wonderful. Go and buy it, you’ll thank me!

Olivia and Anthony are planning A Very Extravagant Wedding at the newest hotel on the tiny Scottish island of Mure. They’re flying in chefs, musicians and something called a living flower wall… and no one is even allowed to think the word bridezilla. 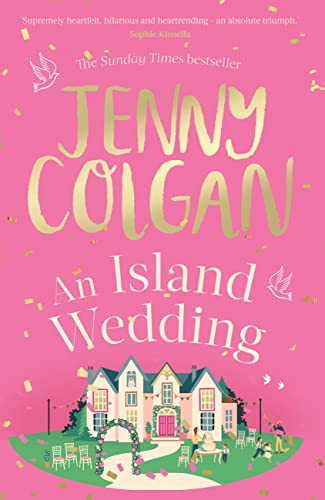