About the Book
In Old Sins, DCI Kelso Strang is taking his first break for years, holidaying with an old Army friend in North West Scotland. Taking the opportunity to indulge his love of hill-walking, he spends a day climbing Suilven, the ‘Sugarloaf’ mountain. Sleeping over in a bothy, he wakes in the middle of the night to hear the unmistakable howl of a wolf.
There is unease, too, that the death of an elderly lady who fell off a cliff has been accepted as an accident by the police. When Strang looks into it he discovers that, while there was nothing to say that it wasn’t one, she had had a remarkably chequered past.
7. I like to end my Q&As with the same question so here we go. During all the Q&As and interviews you’ve done what question have you not been asked that you wish had been asked – and what’s the answer?
And then with one voice they said, ‘She shall be a writer.’ And that’s the way it’s always been.
I’ve written stand-alones and series novels and I definitely prefer the series. My first was set in Galloway with DI Marjory Fleming, and I loved writing it. Her whole family grew in personality with each book and was a strand in itself outside the investigation, and I know my readers got to thinking of them as friends. With a stand-alone, at the end of the book the characters effectively die – they’re certainly not there any more. With a series you can feel that the life of the main character goes on until you rejoin them for the next book. Kelso Strang is developing a hinterland that plays more of a part in each new story, and even now, just before Old Sins is published, I’m writing the next instalment of his life. 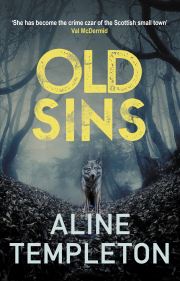