Into the Mouth of the Lion is based on the photographs and notebooks of when I served as a humanitarian worker in Angola, the Democratic Republic of Congo, Darfur (Sudan) and other places in 2000-2009. I worked as a photographer and writer, taking testimony from refugees and aid workers living in crisis situations.
Angola, 2002. In the last days of a vicious civil war, it is a dangerous landscape rife with rebel soldiers, landmines, corruption and deception. A suspicious explosion kills a beloved nurse, while another humanitarian worker goes missing.
6. If you could only read one book for the rest of your life which book would it be?
2. What inspired the book?
5. What do you do when you aren’t writing? What do you do to relax and get away from it all?
Unbound is a crowdfunded publisher, so I had to commit to a certain level of fundraising in advance. What was surprising was the outpouring of support I found for my writing. This was not just from close friends and relatives, but from former colleagues and even strangers all over the world. All these people believed in my book, even though they hadn’t read it yet! That made crowdfunding relatively easy, but was also quite moving. I felt connected to people all over the world, from London to South Africa, Myanmar, East Timor, California, France and Germany… and I wanted my writing to be the best possible version it could be so that they would feel that they had believed in me for the right reasons.
Into the Mouth of the Lion started as a short story based on my true-life experience on a plane flight in Angola that nearly crashed. This later evolved into being Chapter Two of the book. That developed into a full novel with characters that I started to really like, and the mystery that unfolded. I’m not a writer who plans the whole book, but I when I’m writing I like to have an idea of what might happen in the next scene, or the next chapter. My characters always surprise me, and often confound my expectations.
Lena Rodrigues, a young photographer, flies out to Angola’s highlands to piece together the reasons behind her sister’s disappearance. But will she have the strength to bear witness to the truth, before she gets entangled in the country’s conflict for minerals and power?
7. I like to end my Q&As with the same question so here we go. During all the Q&As and interviews you’ve done what question have you not been asked that you wish had been asked – and what’s the answer?
The setting is Angola, 2002. At the end of a vicious civil war, it is a dangerous landscape rife with rebel soldiers, landmines, corruption and deception. A suspicious explosion kills a beloved nurse, while another humanitarian worker goes missing.
People seem to assume that the debut author focusses on just that novel. And to some extent that is true, but I have so many ideas, and many of them are in motion all the time in my head. I have written a draft sequel to this novel that I hope to publish in the next year. I also have the draft of another novel – not linked – which is a cross-cultural love story set in London in the 1950s. I have ideas I’m working on for books set in Boston, Paris, and the Balkans. To finish a writing project well, however, I do need to focus, and for a time that one project will dominate my thoughts. But I’d like to share with your readers that for me, creativity is a lively process. It gives me energy, and makes me excited. Sometimes I have ideas for short stories, other times I find the solution for a thorny problem in a book. Other times I draw inspiration from some graffiti art I’ve seen, or a photography exhibition I’ve been to in person or online. Being a writer for me means that my mind is always observing, constantly inventing and crafting… and trying to make something meaningful out of the different views I am weaving together.
A. B. Kyazze is the author of Into the Mouth of the Lion, which was published by Unbound on 6 May 2021.
I don’t know if I get much of a chance to relax! But I’m a runner – not professionally, but I like to do a half-marathon once or twice a year. I’ve been running since I was a teenager, and it really helps to clear my head. Sometimes I’ll be struggling with a scene or a character, and I go for a run, and suddenly a new turn of events or an answer to a dilemma will come to me. Otherwise, when life returns to normal after the pandemic, I can’t wait to travel again to see friends, family and the sea!
1. Tell us a little about Into the Mouth of the Lion. 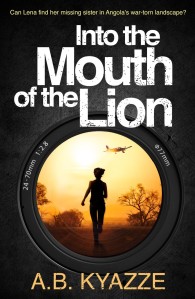 She kindly answered a few of my questions.
Difficult question! I do love Toni Morrison’s writing. Her writing is like poetry in prose form. I’ve recently re-read her book Jazz and it is a quiet masterpiece.
3. Are you a plan, plan, plan writer or do you sit down and see where the words take you?
About the Book
Into the Mouth of the Lion is the story of a young photographer who is looking for her missing sister in the final days of a civil war. The book is a cross-cultural love story and mystery.
4. Is there anything about the process of publishing a book that surprised you?
Lena Rodrigues, a young photographer, flies out to Angola’s highlands to piece together the reasons behind her sister’s disappearance. But will she have the strength to bear witness to the truth, before she gets entangled in the country’s conflict for minerals and power?