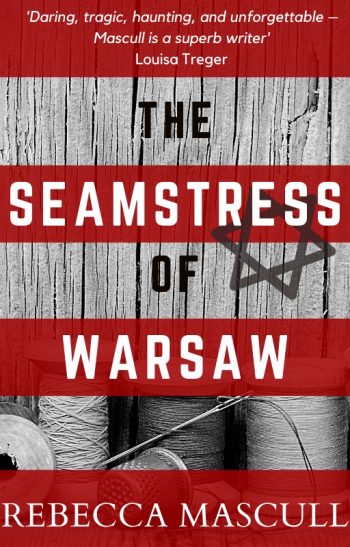 ABOUT THE BOOK
Rebecca’s latest book under the Mascull name is published in September 2021, The Seamstress of Warsaw, the powerful tale of two people unknowingly connected to each other, caught up in the whirlwind of World War II, whose perilous journeys we follow from the Blitz to the Warsaw Ghetto and beyond, published by SpellBound.

My thanks to Zoe of Zooloo Book Tours for the tour invitation and extract. I’ve loved all the books by Rebecca that I’ve previously read and really wanted to review this but unfortunately there wasn’t time. I’ve bought my own copy to read and instead for my turn on the tour, I’m delighted to share an extract.
THE SEAMSTRESS OF WARSAW is a tale of endurance and loss, family and blood, stories and histories, that questions the nature of who we are and where we are going, when the road ahead is burning.
Song of the Sea Maid (2016) & Q&A – Rebecca Mascull Miss Marley (2019) Vanessa Lafayre & Rebecca Mascull

A mother writes a diary as the ghetto walls go up. From the bombed streets of London to occupied Warsaw, to the Polish forests bristling with partisans, will their paths cross? Will their pasts be reconciled? And will they survive the deadly assaults on their freedom and their lives?

Mollie Walton’s The Ironbridge Saga series is set in the dangerous world of the iron industry: The Daughters of Ironbridge (2019). The second book in the trilogy is The Secrets of Ironbridge (2020), set in the brickyards of the 1850s. The third book is set in the coalmines and servants’ quarters of the 1870s: The Orphan of Ironbridge (2021). All three are published by Bonnier Zaffre. Mollie’s next trilogy will be set in WW2 North Yorkshire and the first book of this saga will be out in March 2022, published by Welbeck.
Rebecca has worked in education, has a Masters in Writing and lives by the sea in the east of England. She is also a Fellow of the Royal Literary Fund, based at the University of Lincoln.
Her first novel as Rebecca Mascull, The Visitors (2014) tells the story of Adeliza Golding, a deaf-blind child living on her father’s hop farm in Victorian Kent. Her second novel Song of the Sea Maid (2015) is set in the C18th and concerns an orphan girl who becomes a scientist and makes a remarkable discovery. Her third novel, The Wild Air (2017) is about a shy Edwardian girl who learns to fly and becomes a celebrated aviatrix but the shadow of war is looming. All are published by Hodder & Stoughton.
London
Warsaw
Reading back over my other diary entries, I can’t believe how naïve I sounded. Such a mixture of feelings I had about the ghetto. There was even optimism. Now, after months here, I can testify that it is nearer to hell on earth than any human soul could imagine.
Buy on It is winter in the ghetto. There are now half a million people here, within an area of a little more than a square mile. Only a handful of the population is allowed to cross into the Aryan side to work. For the rest of us, the other side of the wall is becoming a foggy memory. Did we have another life? It seems like a childish dream, that once we were free citizens, free to walk, to board a train, to sit in a café and eat apple cake. Now we exist in a heap of human misery, racked by overcrowding, starvation, disease and death.
Negotiating the crowds is a horrible fact of daily life, and drives one to long for solitude and silence. Even at home, there are times when I cannot bear the closeness of Isak if he puts his arms around me: I’m ashamed to say I have pushed him away, desperate to feel air around my skin. Ilsa clings to me and it is all I can manage to stop myself doing the same to her, but I will not inflict rejection upon my child. She would not understand. Isak must learn to. He does not feel the same, I believe, as he barely leaves the apartment and does not suffer the nauseating nearness of others. He works on the business, such as it is, and uses this as his
Rebecca Mascull is an author of historical novels. She also writes saga fiction under the pen-name of Mollie Walton.
Since the boundaries of the ghetto have been stable for a while, our little world is settling into a new landscape, with its own unwritten laws. There is what is called the large ghetto and then there is the small ghetto, connected in only one place, from the corner of Zelazna Street and over Chlodna Street. Lucky for us, we live in the small ghetto. This is not as crowded, and is largely occupied by the intelligentsia and richer middle class, who take more precautions over lice and disease. We feel safer here. But in order to access some facilities, to get particular items of food or ration cards, or visit a doctor or a client, we have to walk up to the large ghetto. This must be the most terrible place in the world. It is a warren of narrow stinking streets, infested with lice, full of crazy traders who have no money and have to earn their food on the streets. Karmelicka Street is the worst, swarming with crowds of people who shuffle along in a kind of blank terror. A heaving mass of humanity fills every crack and corner of the street, people tugging at your sleeve constantly, a cloying and hideous intimacy.
She also completed the finishing chapters of her friend and fellow novelist Vanessa Lafaye’s final work, a novella called Miss Marley, a prequel to Dickens’s A Christmas Carol. This novella is published by HarperCollins.
Follow her at:
ABOUT THE AUTHOR