5.      Landscape is something readers of the first two novels said they enjoyed and the locations included Loch Ness, Arisaig, Oban and the Sound of Kerrera, Bridge of Orchy and in the second novel, scenes set on the Isle of Mull and Argyll. Since then, Willie has been to Assynt, to Denmark and Sweden – a tense night-time climax on the docks at Gothenburg in Oblivion’s Ghost – and now, in Sovereign Cause, a fraught trip to Barcelona to try to negotiate Ysabet’s release from jail; arrested after covering a political rally.1.      Willie Morton does not exist. Sure, he shares some of my characteristics and it’s certainly fun to develop a character extended over a series but he’s 17 years younger than me, blond, better-looking too. When we first met him, in Deadly Secrecy, set in 2007, he was 35, struggling as a freelance journalist while contemporaries in his class at prestigious George Watsons were now well-ensconced in lucrative positions as pillars of the Establishment, like his schoolfriend, Archie MacDonald, already a senior partner in his law firm. By comparison, Morton was relatively unsuccessful and it is hinted that this is because he has a problem with his conscience. There are things he will not stoop to, unlike his ex-wife Sally Hemple whose tabloid career has progressed on the back of frothy features on celeb culture.

Andrew reads a brief passage from Sovereign Cause here: https://youtu.be/PswiNI9QQ6o
9.      Hidden depths and uncharted voids – I’m fascinated by what lies beneath. Edinburgh with its disused tunnels and catacombs is the perfect location for deceptions and ambiguities. In the basement of Morton’s newspaper, the Scottish Standard, on South Bridge is an 18th century tunnel left over when South Bridge was created from a series of viaducts spanning the Cowgate ‘valley’. In Scotched Nation, Morton escapes from his nemesis Commander Neil Smyth up into the vast crumbling roof spaces of the Palace of Westminster. Alongside the real you need the imagined, fictional spaces to dream.
My facebook Page is: www.facebook.com/ScottishFictionAuthor

6.      Edinburgh – I have great fun creating scenes in some of my favourite places; Leith, Arthur’s Seat, Pilton Mains, Calton Hill, Petit Paris, Deacon Brodies and of course, within the Scottish Parliament and Bute House. Willie moves from Shandon Place to a housing co-op flat in Keir Street, while Emily lives in Lochend Grove, Restalrig and this changes again in Sovereign Cause but you’ll have to read it to find out why. In Oblivion’s Ghost much of the action takes place in Glasgow including in MI5’s Scotland Station, Clyde House on Pacific Quay.
8.      Real people are glimpsed in passing in my books and I have lots of fun here; Nicola Sturgeon appears of course, while other politicians, appear loosely-disguised and some of the real-life counterparts read and enjoy the series! Morton’s editor, Hugh Leadbetter, is based squarely on a well-known Scottish journalist, I know but am not particularly fond of. All characters are amalgams of course but this kind of playfulness adds an extra level of enjoyment and context. My favourite literary *thing* is the myth of ‘the Macintosh Man’ in Joyce’s Ulysses (my all-time favourite book). So minor characters may rise and fall across the series and some are partially glimpsed or ambivalent or their perspective changes over time, for example someone barely glimpsed in book one may become quite prominent by book three or suffer a fatal accident in book 4; such are the joys of writing a series. You’re constantly checking to make sure the background knits together. One of the best writers at doing this is Peter Robinson. I collect his DI Banks series, set in the wonderful Yorkshire Dales. He’s now nearly thirty books in. Incidentally, I am not unduly fond of Banks himself, or the TV adaptation and only read the books because of their fabulous sense of location!
My Goodreads author profile is at: https://www.goodreads.com/author/show/8187454.Andrew_Scott
&nbsp;My website is: https://andrewmurrayscott.scot
2.      Morton’s character development is one of the things readers enjoy most. A ‘new man’, he is the antithesis of the James Bond type, though, as a former member of his school’s Second XV rugby team, capable of grappling with bad guys, dodging flying bullets in a remote distillery stillroom, jumping/falling off a moving train or finding his way out of a dense Swedish forest in the pitch-black. In Sovereign Cause he has to fight off two ‘muggers’ in a Barcelona alley and face down an angry man with a gun in a Christmas-festooned Harrods – but he always knows when to shut up if a woman wants to speak.
Watch a brief introductory video about Sovereign Cause here: https://youtu.be/iw2sT-vBboQ
My Amazon Author Page is: https://amzn.to/2ZTuoCV
Sovereign Cause and other Willie Morton series titles are available in paperback and Kindle eBook from my Amazon Author Page: https://amzn.to/2ZTuoCV
From the back of the book (Sovereign Cause)
SOCIAL MEDIA LINKS
4.      ‘What’s behind closed doors in the corridors of power’ is the key concept of the series. Among other things, I did two stints, ten years in total, as a press officer for senior parliamentarians at Westminster and Holyrood. Readers want privileged access behind the scenes. The plots derive from news headlines fleshed out with what I know or can deduce about people in positions of power and what they are capable of when the chips are down. Whatever your political views, the tense constitutional situation in the UK right now offers huge opportunities for a political thriller series with unions of one kind or another being called into question.
In an unusual twist on the #TenThings feature, author Andrew Scott talks about the protagonist
of his political thriller series and his new title, Sovereign Cause.
7.      London – no political thriller could take place purely in Scotland and I have used my work experience in Westminster to good effect to set scenes inside the Whitehall labyrinth. I lived in London for five years and, like Edinburgh, there are many evocative locations and obscure places only a resident would know.
“#TenThings about *Willie Morton* and me.”
3.      Willie’s improving relationships with women appeals to readers. When we first met him, he was rather lost, two years on from a divorce. His ex, Sally, had moved to London to write tabloid gossip columns and he was getting close to Celia Thornton but it was not until the second book, Scotched Nation, that he met the high-flying Emily-Louise McKechnie, Head of Political and Constitutional Studies at Edinburgh University. She’s too good for him really but their casual relationship deepened as they spent more time together and even managed to go on a hiking holiday together in the Salzkammergut. In Sovereign Cause, their relationship has taken a significant step forward (no spoilers here!) And he has a new intern, Ysabet Santanac, a well-connected and feisty Catalan journalism graduate, whom I’m keen to develop in future novels.
My Twitter account is: @AndyMurrayScott
With his intern Ysabet Santanac arrested in Barcelona, Morton is high on the hit list as deadly forces unleashed by London and Madrid converge to bury an inconvenient truth.
10.   Future titles? I hope so. Sovereign Cause is my eighth novel, my 18th book. It’s too late to stop me now! Certainly, there are loose ends in Sovereign Cause, for instance a certain engaging Ukranian called Pavlo who has pushed himself into Morton’s circle and his home and who might, just might, be a Russian spy…
Journalist Willie Morton unravels a thirty-year old conspiracy over the 1985 death of Treasury mandarin Matthew McConnacher nineteen days after his report, claiming an independent Scotland could be economically viable, was classified.
Intrigued by the state’s reluctance to declassify the report, he probes the mystery of McConnacher’s death and learns of a power-grab at the heart of the Cameron government led by Commander Neil Smyth, chair of the National Security Committee – whom Morton has reason to fear – and a secret military deal with hardliners in Spain to crush Catalan nationalists. 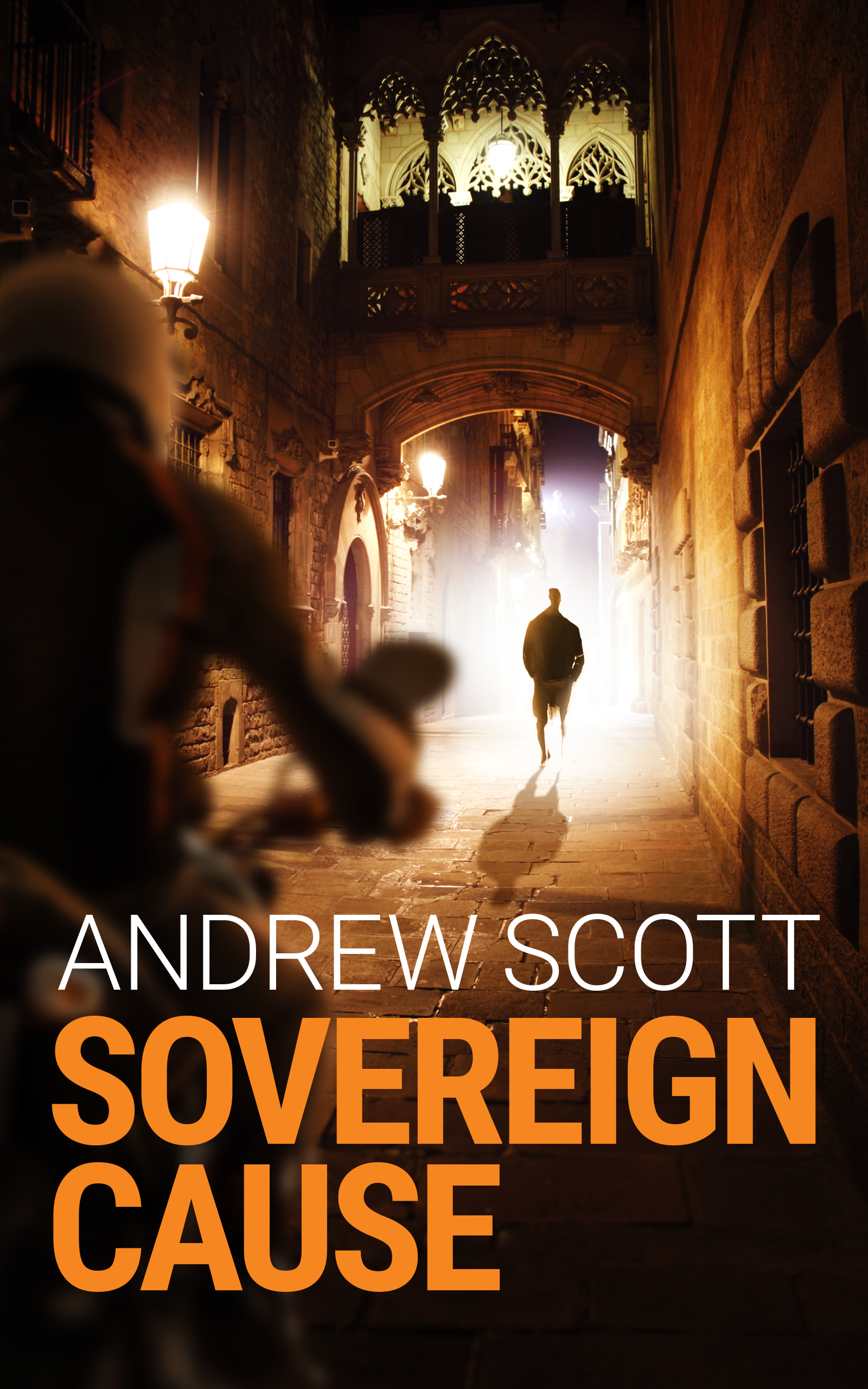