Until they went missing all of a sudden in 1972. No explanations, no obvious clues, nothing to put the minds of the women they left behind at rest. The author very cleverly weaves their disappearance into another narrative, twenty years later, when a writer gets in touch with the women. He’s writing a book and wants their memories and theories as to what happened to their men. Through the 1992 story and through the interviews we get to see what it was like for them before and after the disappearance.

Twenty years later, the women they left behind are still struggling to move on. Helen, Jenny and Michelle should have been united by the tragedy, but instead it drove them apart. And then a writer approaches them. He wants to give them a chance to tell their side of the story. But only in confronting their darkest fears can the truth begin to surface . . .
Cornwall, 1972. Three keepers vanish from a remote lighthouse, miles from the shore. The entrance door is locked from the inside. The clocks have stopped. The Principal Keeper’s weather log describes a mighty storm, but the skies have been clear all week.
Twitter
My review today is of The Lamplighters by Emma Stonex, which I thought was a brilliant read. My thanks to Camilla Elworthy of Picador for the gorgeous proof copy of the book for review purposes.

They say we’ll never know what happened to those men.
They say the sea keeps its secrets . . .
‘A mystery, a love story and a ghost story, all at once. I didn’t want it to end’ – S J Watson

This is a book that is incredibly atmospheric. There’s the obvious sense of foreboding, the tower rising from the sea and the slight menace of the water, but there’s also the portrayal of the women on the land, looking out at the tower in the distance, sometimes wishing their husbands were home but taking time to adjust when they were. It’s an intensely gripping and brooding read, well-researched and expertly plotted. It’s a triumph.
This is the story of three lighthouse keepers of different ranks. Collectively they look after the Maiden Rock lighthouse off the coast of Cornwall. This is no pretty mainland building though. This is a tower in the middle of the sea, surrounded by roiling water and with only a distant sight of land. Once in the lighthouse they can go nowhere for two months at a time. The set up and dynamics between the three men was something I found absolutely fascinating. For these men it was simply a way of life.
Emma Stonex has based her book around real events but made it her own. She’s written something literary yet accessible, and I loved how the story unfolded organically as I was thrust between the weeks leading up to the bizarre events of 1972 and the details that were coming to light in 1992. I was totally caught up in the mystery of it all.
Inspired by real events, The Lamplighters by Emma Stonex is an intoxicating and suspenseful mystery, an unforgettable story of love and grief that explores the way our fears blur the line between the real and the imagined.
The author portrays so well the differing kinds of grief felt by the women, from acceptance to never waning hopefulness, and once or twice I felt a lump in my throat. It’s just so exquisitely written, so involving and so very intriguing.
Emma Stonex was born in 1983 and grew up in Northamptonshire, about as far from the sea as it’s possible to be in the UK. Her love affair with lighthouses and the coast began with childhood holidays to Cornwall and the Isle of Wight, which remain among her favourite places to visit.

She lives in Bristol with her husband and two young daughters.
What happened to those three men, out on the tower? The heavy sea whispers their names. The tide shifts beneath the swell, drowning ghosts. Can their secrets ever be recovered from the waves?
Before becoming a writer, Emma worked as an editor in publishing. Ahead of THE LAMPLIGHTERS, she wrote several books under pseudonyms, but saved her real name for the story that had always been in her heart: the real-life mystery of three lighthouse keepers who vanished from their rock light in 1900 and to this day have never been found. 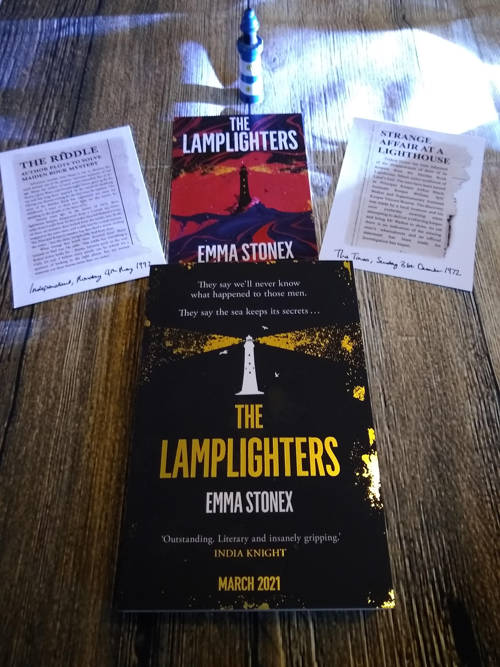 A locked room mystery on a lighthouse? Can it get any better? Well, no, it seems not. The Lamplighters is a wonderful read, one that in turns gripped and saddened me.