Sarah J. Harris is an author and freelance education journalist who regularly writes for national newspapers. She became fascinated by synaesthesia and face blindness during her work as a journalist. THE COLOUR OF BEE LARKHAM’S MURDER is Sarah’s debut adult novel. She lives in London with her husband and two young children.

My review today is of the wonderful One Ordinary Day at a Time by Sarah J. Harris. My thanks to Harper Fiction for sending me a proof copy of the book for review purposes. It will be published in hardcover, eBook and audiobook on 10th June.
From there it’s just the most wonderful story of friendship, admittedly after a few misunderstandings, between these two most loveable characters. Simon is so quirky and unusual, a man who is unable to deal with people and doesn’t understand their emotions and nuances, but he is an absolutely fantastic creation. As the story progressed so much about him became clear and I just loved him even more. Jodie is brilliant too, a fighter and a great mum to the very delightful Zak. The book very much revolves around these three and the characterisations are perfectly executed. I also thought that the author did such a good job at letting their back stories unfold and showing how their childhood experiences had shaped them as adults. The plot itself is so effective and the writing is appealing.
What if life could be so much more? When Simon and Jodie’s worlds collide, it upends everything they know. But in chaos comes opportunity. And for every person who’s ever doubted them, they find someone who’ll finally believe…
Like Loading…
TWO PEOPLE
Jodie grew up in care. Now she has a son of her own, Zak, and all she wants is to make a better life for the two of them. A job at Prince Burger fast food restaurant isn’t quite what she had in mind but it’s a step towards fulfilling her dreams. Simon is a bona fide genius. He was one of those kids who was sitting his exams way before the other children but at what price? He’s now working at Prince Burger and that’s where he and Jodie meet. 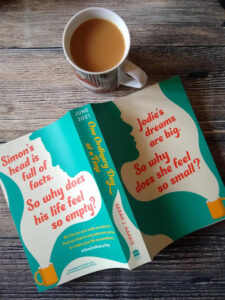 Meet Jodie and Simon. Both of them had a difficult childhood and adulthood hasn’t proved that great either. Maybe meeting each other by chance will be the start of better times for them.
Simon Sparks is the man you know from behind the counter at the local Prince Burger (‘hold the gherkin!’), fry shovelling, shelf stacking, hiding away from the world. And Jodie Brook is the single mum you see crossing the street with her son Zak – always chasing a dream she can’t reach.
One Ordinary Day at a Time is so heart-warming and so uplifting. I loved the fact that it was about friendship over anything else, and the tightening of bonds between Simon and Jodie. There were laughs and tears, hoorays and “oh no”s. It’s an all-round magnificent read and one that is most definitely extraordinary rather than ordinary. I loved it.

ONE ORDINARY DAY AT A TIME

From the award-winning author, Sarah J. Harris, comes a warm, uplifting story about ordinary people, extraordinary tomorrows, and all the ways that life can surprise us…