That’s not to excuse what I did, which was indefensible, and I will never forgive myself. I fully accept responsibility for my actions. But I wasn’t in the right headspace. I was immature, full of anger, grief-stricken. And besides, what we did – what I did – was intended, in a clumsy and callous way, to redress a wrong; to balance the universe.

At first, I thought that the guilt would poison my life, that I’d never get over it; but it didn’t, and I did. And in the years and decades that followed, a lot of what happened has drifted from my memory. I suppose if I was really sorry for what I did, and truly contrite, I would think about it more often – every day, every week, once a month. But I don’t, and it all seems such a long time ago now. A lot of things have happened in the years since, and it’s almost like it never took place at all.

A twisty and chilling thriller about a woman who did one bad thing when she was young… and must now suffer the consequences.

But here’s the thing. I’ve also learned that when the past comes back to haunt you, and you face the prospect of losing everything you love, there’s only one way to escape that one bad thing.
In the months that followed, when my mental health hit rock bottom and I finally dragged myself slowly out of depression, I often thought about apologizing to our victim. But I was never able to find him. I tried the bar where we picked him up, and even went to his flat, but he had left a few weeks before, leaving no forwarding address. So, no, that didn’t happen.
“What you have to understand is, it was a very bad time for me.
I’m truly sorry for what happened, and all I can say is, lesson learned. 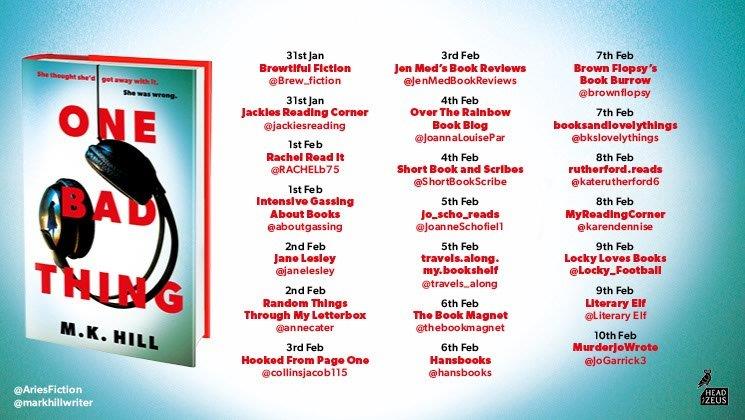 And that’s by doing something worse. “
Like Loading…
Welcome to my stop on the blog tour for One Bad Thing by M.K. Hill. I have an extract to share with you today from chapter one. My thanks to Sophie Ransom PR and Aries Fiction for the place on the tour and for sending the book which I hope to read very soon. It’s available now in hardcover, eBook and audiobook.

It’s true to say that in the intervening years I’ve tried to be a force for change, and to help people where I can – and I think on the whole I’ve succeeded in that. I’m not saying I’m a completely good and perfect person, but I’m not a bad one either, I’m really not. After all, no one is all good or all bad. We all just muddle along the best we can, trying not to hurt people, don’t we? Sometimes we let ourselves down, but if we’re determined to do the right thing, if we make a conscious effort to treat people well, I don’t see why we have to let the guilt of our previous bad behaviour, those silly mistakes we all make from time to time, tear us apart.

However, I’ve learned to my cost that you can never totally leave behind that one bad thing you did. You may try to forget it, and to drown out its nagging echo by living the best life possible, but it will catch up with you. And if you’re unlucky, it will turn your life upside down.

M.K. Hill was a journalist and an award-winning music radio producer before becoming a full-time writer. The first novel in the Sasha Dawson series, The Bad Place, was described as ‘everything a police procedural should be’ by The Times, who also named it as their crime book of the month. He lives in London.