When Milo Sturgis is given a cold case he is not pleased and not afraid to show it, but soon calls in best friend, psychologist Alex Delaware.  At over 30 years old it’s more like a frozen solid case and the pair have little hope of thawing it out. Ellie Barker was only 3 years old when her mother died, found shot in a burnt out car in LA. The murder file is scant, the likelihood of finding witnesses seemingly futile and Milo is left with the sense he has been dumped with the case due to Ellie’s wealth. But as he and Alex begin to dig up the past, it seems that someone would prefer that the secrets remain buried.
Decades on, many detectives tried and failed to get to the bottom of the case.
Publication date – 4 February 2021
The reader sees the clues appear at the same time as the intrepid duo so there are few chances for an aha moment. However there are enough hints for the reader to work out what has happened just before Alex and Milo.
The pace is just right, there are no times in the story when it flags. Just as one clue is uncovered, the trail leads to another, so that the story unfolds continuously.
Alex Delaware stories have a distinct style. Staccato speech, short sentences, with lots of descriptions of the surroundings Milo and Alex drive through on their way to crime scenes. The scenes themselves don’t always pull punches but then there are some that leave more to the reader’s imagination, making them perhaps all the more impacting.
Recommended.
Ellie Barker never knew her mother. 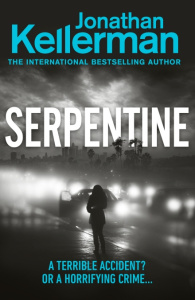 In Serpentine, it soon becomes apparent that Ellie’s mother wasn’t all as she seemed. Ellie herself only knows her from the one picture she has, and the serpentine necklace her mother left behind. Her death leads to a breadcrumb trail of more deaths, seemingly disparate. The question Milo and Alex have to answer is are they linked and if so why.
When she was barely three years old, her mother was found with a bullet in her head inside a torched Cadillac, overturned on Mulholland Drive. No physical evidence, no witness and no apparent motive.
Alex and Milo return with a with a gripping, dark case that shows that evil is never truly buried or forgotten. It is simply put away, ready and waiting to be stirred awake.
There is a little more background about Alex’s past revealed, though by little I mean a few sentences dropped in here and there. Regular readers will be aware that there is little known about Alex. The stories are narrated by him and whilst he’s adept at describing those he comes into contact with, he rarely mentions his own features. The reader has to fill in the missing details and create their own image of Dr Delaware.
Desperate for answers, Ellie hires LAPD homicide lieutenant Milo Sturgis, who calls in the expertise of brilliant psychologist Alex Delaware, to investigate.
But as the duo start digging, the mystery becomes even more twisted. And they soon discover a string of dangerous threats still lurking in the present…
Published by Century
About the Author
Jonathan Kellerman is the Number One New York Times bestselling author of more than forty crime novels, including the Alex Delaware series, The Butcher’s Theater, Billy Straight, The Conspiracy Club, Twisted, True Detectives, and The Murderer’s Daughter. With his wife, bestselling novelist Faye Kellerman, he co-authored Double Homicide and Capital Crimes. With his son, bestselling novelist Jesse Kellerman, he co-authored Crime Scene, The Golem of Hollywood, and The Golem of Paris. He is also the author of two children’s books and numerous nonfiction works, including Savage Spawn: Reflections on Violent Children and With Strings Attached: The Art and Beauty of Vintage Guitars. He has won the Goldwyn, Edgar, and Anthony awards and the Lifetime Achievement Award from the American Psychological Association, and has been nominated for a Shamus Award. Jonathan and Faye Kellerman live in California and New Mexico. For more information please visit: http://jonathankellerman.com/ https://www.facebook.com/JonathanKellerman
I absolutely love this series and whilst in any long running serial there can be peaks and troughs, Serpentine is definitely a peak. This is book 36 in the series. If you haven’t read any of them before and love gritty crime dramas shot through with secrets, lies, drama and insight into the cruelties humans can inflict on each other then this is the series for you. Even if you are long time fans of the series then a treat is in store when you pick up this latest instalment.
Source – review copy