Friday morning dawned bright and clear. As ever when it was important to hear his alarm, he had woken multiple times during the night, apparently for the express purpose of checking his alarm clock. As a result, by the time it did go off at six thirty he felt as though he’d been through a mangle. Nonetheless, he got up, showered and drove to work a whole ninety minutes earlier than normal. The approaches were quiet and the security guard had time for a chat, remarking on the surprise of seeing him before seven thirty. He replied with some anodyne comment, then drove through to the car park. There were very few cars in it at that time, and he had no difficulty leaving his car in the space designated K14.
Distracted, Jack turned his attention away from the man walking briskly down the drive and concentrated on the squawking phone. ‘Hi, Mum,’ he replied. ‘I’ve told you, I don’t know yet.’
About the Author
At 1310 precisely, he got up from his work bench, took off his white lab coat and left it over the back of his chair. Someone called to him as he left the lab, but mindful of his instructions he took no notice. Pretending he hadn’t heard, he headed for the exit and the car park, pulling his keys from his pocket as he went. Just as he approached his car, his mobile phone rang. Typically, when you’re in a rush, it caught on the edge of his pocket as he tried to pull it out to see if it was a call he needed to take. His mother! Oh God, this would be a long one and he was now running a few minutes late. As he got into his car, he saw the silver Ford Focus come round the corner and into the lane leading to K14. Hurriedly, he dropped the phone on the passenger seat and started his car. The silver Focus was already waiting a few yards away as he pulled out of the parking space. A man he didn’t know gave him a very cold stare, then looked over his shoulder to reverse into K14. Looking in his rear view mirror, Jack saw him get out of the car, close the driver door and walk away towards the main entrance to the site. At this point, the phone connected to his car loudspeaker system and his mother became audible.
Now read the extract
The enquiries lead down dangerous paths, with both Greg and someone he cares for put at risk, before he runs the perpetrators to ground. Then he’s posed an ethical conundrum in court. Can hate ever be wholly sane?
Well that ends on something of a cliffhanger, doesn’t it? If you’d like to find out what happens to Jack, make sure you get yourself a copy of Fires of Hate.
Heather Peck has had a life of two halves. In the first she was both farmer and agricultural policy adviser. She bred sheep and alpacas, reared calves, broke ploughs, represented the UK in international negotiations, specialised in emergency response from Chernobyl to bird flu, managed controls over pesticides and GM crops, saw legislation through parliament and got paid to eat KitKats while on secondment to Rowntree. In the second half Peck chaired an NHS Trust, worked on animal welfare, sailed a boat on the Norfolk Broads, volunteered in Citizens Advice and the Witness Service and vaccinated humans against Covid. Two golden threads have run through everything, her fascination with words and her Gran’s wise advice: ‘You can do anything if you try hard enough.’ She writes about the countryside and the animals she loves, the industry (farming) she holds in deepest respect, and issues she is passionate about. Peck’s main protagonist has grown with each story and his life has changed in ways she couldn’t have predicted at the start. She’d like to meet him. http://www.heatherpeckauthor.com
‘Fires of Hate’ continues the Greg Geldard series; a compelling narrative of crime, emotion and one man’s fight to do the best he can.
‘Jack, can you hear me? Jack, I asked whether you would be able to come up for your Gran’s birthday party next week? You know she’s eighty, and would really love to have you.’
After a successful day in court, Greg Geldard is hoping to clear up some routine cases. Then a government laboratory receives a mysterious threat, a terrorist attack precipitates a multi agency emergency response and his investigations are seriously compromised by interference from the security service.
He was interrupted by an overwhelming noise, more roar than bang, and his car was propelled violently forward into the car in front.
I’m pleased to be sharing an extract from the third book in Heather Peck’s DCI Greg Geldard’s series. The book is published by Silverwood Books and is available now for ereaders and in paperback. Thanks to Anne at Random Things Tours for having me as part of the booktour. First let’s find out what the book is about. 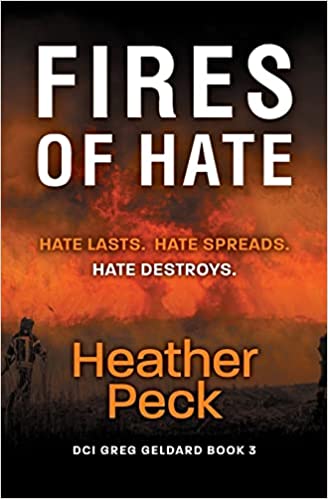