5. What do you do when you aren’t writing? What do you do to relax and get away from it all?
Paul kindly answered a few of my questions.
It’s not so much a question that I haven’t been asked but it’s always a fun one and came up yesterday: Who would you invite to a literary dinner party?
Wow, what a hard one! Normally, this sort of question is framed in a desert island context and one is allowed at least three. It would have to be a book that you could continue to draw meaning and joy from, from repeated readings. It would also have to be long … very long. For these reasons I’ll choose Proust’s ’In Search of Lost Time’. I’ve only read the first volume but now there’d be no distraction to tackle the rest.
It is called The Actuality and has as its protagonist a female AI created in the image of a woman she has never met – a near-impossible task to be second best. It’s also a bit of a dystopian thriller.
1. Tell us a little about The Actuality.
4. Is there anything about the process of publishing a book that surprised you?
2. What inspired the book?
Paul Braddon is the author of The Actuality, which was published by Sandstone Press on 18 February 2021.
Having the point of view character as an artificial person offers a unique viewpoint. My character blends high-intelligence and stifled curiosity with old-fashioned innocence and generated much writing joy. 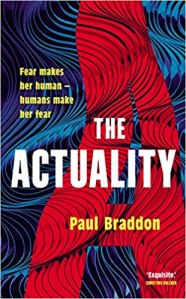 About the Book
The idea for The Actuality started with the desire to write something with a dystopian edge. I had the worlds of Margaret Atwood and Cormac McCarthy’s The Road in my head and was dabbling around in what Atwood refers to as the ‘future possible’ when I began to think afresh about where artificial intelligence was headed. Also, Mary Shelley’s monster was never very far away, lurking in the shadows.
Paul Braddon grew up in Surrey and lives in London with his wife Mary and son Thomas. He has a degree in English Literature and Language from Reading University. The Actuality is his debut novel.
Just how amazingly talented the people are who I’ve had the pleasure to come across and who have contributed to the publication process of The Actuality. Everyone absolutely knows their stuff and is so confident and calm. There can’t be many industries where this is so.
A bit of both. I won’t start on an idea until I know roughly how the plot will go and that the ends will tie up so I don’t waste months on something that doesn’t ultimately work. Having said that, one needs to remain flexible as ideas develop.
Last year, I was lucky enough to leave my full-time job (I worked in the finance team at the BBC) and dedicate myself to writing. Before that writing was my relaxation, now I have the weekends and evenings to read, watch movies and go on walks. I also hope to resurrect old hobbies, such as painting.
We’re at the early stages of creating artificial intelligence and its impact so far is relatively limited but it is going to change everything and people need to start thinking urgently about how we can ensure that the world is not made a less safe place. But I didn’t want to write about a super computer or a clever weapons system, I wanted a character that the reader could care about. AI in the most part will not require human form and to get to the point when it is possible to manufacture convincing artificial people is some way off, but using the familiar shell of the human body is the only sure way to make a story truly relatable.
The Actuality was published in hardback on the 18th of February by Sandstone and is available through bookshops and all online sites, including the publisher’s own bookshop. Here is a link to the product listing on Amazon. There is also an audiobook which is beautifully read by Eva Feiler and worth getting just for her! My website can be found at paulbraddon.com.
Evie is a near-perfect bioengineered human. In a broken-down future England where her kind has been outlawed, her ‘husband’ Matthew keeps her safe but hidden. When her existence is revealed, she must take her chances on the dark and hostile streets where more than one predator is on the hunt.
The answer would be Charles Dickens for the repartee, the eighteen-year-old Mary Shelley, because I’d love to ask her about the creative process behind Frankenstein and what it felt like to have such success so young, and as a woman back then. Lastly, I’d ask David Mitchell (author of Cloud Atlas) because I admire his work and he seems to be such a nice person and I’d like to make him a friend. I think once everyone had got over the shock of dining with the dead, we’d have a great time.
About the Author
7. I like to end my Q&As with the same question so here we go. During all the Q&As and interviews you’ve done what question have you not been asked that you wish had been asked – and what’s the answer?
3. Are you a plan, plan, plan writer or do you sit down and see where the words take you?
6. If you could only read one book for the rest of your life which book would it be?