Short bio and other links
Trailer: https://www.youtube.com/watch?v=vnJ5pbhSLho&feature=youtu.be
YouTube: Anne Goodwin’s YouTube channel
As an adult, she’s kept other people at a distance… until Simon sweeps in on a cloud of promise and possibility. But his work is taking him to Cairo, the city that transformed her life. She’ll lose Simon if she doesn’t join him. She’ll lose herself if she does.
Sugar and Snails is a fascinating debut novel looking at identity and what makes us who we are. Anne Goodwin’s writing is excellent and she has a perfect balance of past and present. I found it very thought-provoking and think it is a book which explores a difficult topic in an engaging and enlightening way.  I was totally engrossed in Diana’s story and highly recommend it.
From the back of the book
Anne Goodwin is the author of two novels and a short story collection. Her debut novel, Sugar and Snails, about a woman who has kept her past identity a secret for thirty years, was shortlisted for the 2016 Polari First Book Prize. Throughout February, subscribers to her newsletter can read Sugar and Snails for free: https://www.subscribepage.com/sugar-and-snails-free-e-book  CLOSES 28 FEB
Sugar and Snails tells the story of Diana, a psychologist in her 40s. Diana has a few friends but has kept relationships at bay until now, when she has become involved with Simon Jenkins and their relationship is developing into something more serious. Simon is heading off to Cairo for a sabbatical and asks Diana to join him. Unknown to him, Cairo played a significant part in Diana’s past and she feels she is unable to return there for many reasons.
Amazon author page: viewauthor.at/AnneGoodwin
At fifteen, she made a life-changing decision. Thirty years on, it’s time to make another.
This was such a cleverly written book. A first person narrative from Diana’s perspective means the reader has a clear insight into her thoughts. Episodes from Diana’s past at various stages of her childhood and adulthood are woven into the story enabling the reader to come to understand what has made Diana the women she is today. Anne Goodwin has written a very powerful and thought-provoking story looking at issues which are quite rare in a novel. I can’t think of many others looking at the subject, at least in such a sensitive way. Through all the different stages of Diana’s life we come to learn how she has had to deal with very difficult feelings and how misunderstood she was. Anne Goodwin has used her own background in psychology to great effect both in exploring Diana’s feelings and her work.

It is hard to say more about this book without giving spoilers. You may guess Diana’s hidden secrets early on but you may not until all is revealed by the author and I don’t want to spoil it. All I will say is whether you have your suspicions or not, when you find out about Diana’s past you will appreciate just how clever Anne Goodwin has been in her writing. Diana is a brilliant character, very complex and rather brave. I found her parents particularly well drawn as they struggled to try to understand a situation they were bewildered by.
When Diana escaped her misfit childhood, she thought she’d chosen the easier path. But the past lingers on, etched beneath her skin, and life won’t be worth living if her secret gets out.
Twitter @Annecdotist.
Website: annegoodwin.weebly.com
A few years back now, I read Sugar and Snails by Anne Goodwin. It’s a book which fascinated me and throughout the month of February the author is giving subscribers to her newsletter to read an e-copy for free. To sign up for the newsletter and find out more, click here. Read on for my review of the book – I think it says a lot about the book that when I re-read this review myself, Diana’s secrets immediately came back to me!
Link tree https://linktr.ee/annecdotist
Sugar and Snails charts Diana’s unusual journey, revealing the scars from her fight to be true to herself. A triumphant mid-life coming-of-age story about bridging the gap between who we are and who we feel we ought to be. 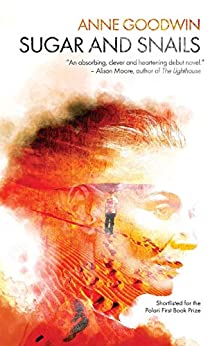