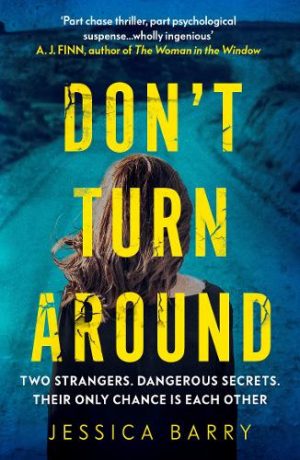 They worked silently, Cait gripping the fox’s hindquarters while she took the neck. Together, they gathered the body out from under the Jeep and carried it over to the side of the road. It was surprisingly heavy; its fur was almost achingly soft.
She gripped the handle on the door, knuckles white. Her lungs tightened. It was happening again: the walls closing in, the darkness creeping at the edge of her vision. The Jeep was suddenly too small, a tiny metal cage, there wasn’t enough air for them both. She was inhaling Cait’s breath, and Cait was inhaling hers, and that meant they were using up all the oxygen. They were going to suffocate in this stupid tin can that smelled like stale cigarette smoke and fake pine and Cait’s shampoo and the perfume that Patrick had given her for her thirty-fifth birthday and God how could she survive this, how could she survive?
“It looks like it was quick. Painless.”
Rebecca glanced at the clock. It was close to one a.m., which would be eleven on the West Coast. Maybe he was asleep already, or maybe he was in the hotel bar drinking a vodka tonic with one of those “Hello, My Name Is” labels still stuck to his shirt, as if the people there wouldn’t know the name of the keynote speaker. She had spoken to him earlier that evening, after he’d given his talk but before he’d gone to dinner. He was fresh from the shower— he always showered before dinner— and she could hear him getting dressed over the speaker, the sound of silk slipping through his fingers as he looped his tie around his neck. She’d answered his usual questions— Was she taking it easy? Had she eaten lunch? Had she set the house alarm?— and promised to call him first thing in the morning. She told him that she loved him, and that she missed him, even if the truth was more complicated.

Cait nodded. “Sorry, I know it’s stuffy in here.”
“Oh, God.”
She attended Boston University, where she majored in English and Art History, before moving to London in 2004 to pursue an MA from University College London.
Jessica Barry is a pseudonym for an American author who grew up in a small town in Massachusetts and was raised on a steady diet of library books and PBS.
“I’m okay. I’m just sorry this happened. I should have . . .” She trailed off. The headlights cast two interlocking circles of light in front of them, stretching their shadows long. The only sounds, the hum of the engine and the faint static coming from the radio.
Silence.
Cait shook her head. She looked pale and stricken. “I don’t know. A coyote, maybe?”
The fox was small— probably a female, and a young one at that. Rebecca thought of the den that used to be underneath the old trampoline in her parents’ backyard. Her dad always pretended that they drove him crazy— “Mangy, overgrown rats,” he’d mutter when he found a fresh lump of scat— but she had caught him smiling at them from the back window on more than one occasion. One summer, she woke up to find the cubs jumping on the trampoline, their little legs flying up in the air as they did flips and somersaults, their mother crouched watchfully nearby. “They’re not much different from dogs,” her mother had said, placing a hand on her shoulder. “Just a little wilder.”

My thanks to Graeme Williams (@gray_books) for the tour invitation and offer of a copy to review. I’m delighted to be joining the road trip with an extract and my review will follow on paperback publication day, 15th April. You can follow all the stops from the banner below. From First Page to Last and Novel Deelights will have the next chapters but my co-host today is Liz Loves Books who is hosting a Q&A.
And there is someone right behind them, watching their every move…
California
Cait stared down at the dead fox and up at the deserted street. “We can’t just leave it here in the middle of the road.” She looked at Rebecca. “Are you okay? You aren’t hurt?”

ABOUT THE AUTHOR
She opened the door and walked slowly to the front of the Jeep, legs shaking visibly from the shock. Rebecca followed close behind. They saw it at the same time: a smear of blood across the front end and a tuft of coarse hair caught in the grille. A mass of spiky reddish fur. A single limp paw.
Two strangers, Cait and Rebecca, are driving across America.
This was a trick she’d taught herself after the first few panic attacks. If she needed to escape the confines of her mind, she would take herself to California. She pictured the palm trees arcing above the parks and the Victorian houses painted in shades of sherbet and the smell of salt water everywhere. If she closed her eyes and thought hard enough, she could conjure up the view of San Francisco from Crown Beach: skyscrapers shrouded in mist, the swell of Nob Hill, the wide arc of the Bay Bridge.
AUTHOR LINKS:
She felt the girl’s eyes on the side of her face, watching. Don’t look at me. Don’t look. The walls pressed in tighter. She was a baby bird nestled tight inside its egg. Her lungs began to scream.

EXTRACT – Chapter 5
As they pulled out of town, Rebecca could still make out the outline of the fox’s shape in the moonlight, growing smaller and smaller. Soon it was out of sight.
“I’m fine. Are you?”
“Get back in the car. You shouldn’t be out here.”
“What was that?”
SUDAN, TEXAS
She felt her rib cage start to relax, her breathing ease. She felt strong enough to talk. “Do you mind if I roll down the window a little? I think I need some air.”
She thought of the papers tucked into her bag. Maybe he already had. Maybe they were already on their way.
It was a fox. From this angle, lying motionless beneath the undercarriage, it looked like it was sleeping. Only the dark red blood staining the muzzle gave it away.
A streak of movement in the headlights. Flash of teeth and dark fur. A sickening thud. A whimper. Cait slammed on the brakes, the screech of tires on tarmac splintering the night, too late.
Rebecca shook her head. “You can’t move it on your own.”
She lives with her husband, Simon, and their two cats, Roger Livesey and BoJack Horseman.
Cait’s job is to transport women to safety. Out of respect, she never asks any questions. Like most of the women, Rebecca is trying to escape something.
But what if Rebecca’s secrets put them both in danger? There’s a reason Cait chooses to keep on the road, helping strangers. She has a past of her own, and knows what it’s like to be followed.
They both knew that was unlikely. Dead foxes were a dime a dozen on a road like this— its body would be left for the vultures to pick over or tossed in the trash for the next municipal pickup.
The air was bracingly cold, and Rebecca felt shocked back into her body with every breath.
Cait straightened up suddenly and dusted off her jeans. “Why don’t you get back in the car,” she said, trying to steer her toward the door. “I’ll take care of this.”
272 MILES TO ALBUQUERQUE
Cait’s eyes were still on her. “You okay? You look a little— ”
“Maybe.”
Cait nodded. “I hope so.”
Cait looked back to see Rebecca standing behind her. Cait shook her head. “Get back in the car.”
Rebecca stared down at the fox and fought the sudden urge to howl. It looked so lonely there, all alone in the grass. So small. Like its mother had never licked its soft fur clean, or given it an affectionate nip while it played with the other cubs. She looked away. It was awful, this world. Sometimes unbearably so.
They placed the fox at the edge of a small patch of grass in front of a trailer park. “Maybe someone will find it in the morning and give it a proper burial,” Cait said, tilting her chin toward the row of houses.
“Sure I can.”

“Is it— ?” She didn’t need the answer. She already knew.
“Please.” She leaned down and placed a hand on the fox’s skull. “Let me help.”
Rebecca reached out a hand and touched its chest. Its fur was soft underneath her fingers and still warm.
She heard the sound of the Jeep’s door closing and turned to see Cait walking toward her with a bundle of fabric in her arms. An old Baylor sweatshirt. She bent down and tucked the sweatshirt around the fox’s body. The look in her eyes was both embarrassed and defiant. “I didn’t want it to get cold.”
She reached into her bag, wrapped her fingers around the hard plastic of her cell phone, dropped it. It was late— if he was going to call, he would have done so already. He didn’t like to wake her up. Still, cold fingers of fear brushed against her neck. If he called and she didn’t answer, would he send someone to the house to check on her? And if they saw she wasn’t at home, would they find a way to track her down?