The Servant can be a dark read – I have had letters and emails telling of tears shed over its pages – but it does have a strong and compensating love story running through it and a heroine to root for. It is my tribute to women at the bottom of Georgian society, struggling to make the best of hard lives. I hope the book has done them justice.
The Servant, was inspired by a visit to the Foundling Hospital Museum. I had not previously known of the epic seventeen-year struggle of retired sea captain William Coram to provide this haven for babies otherwise destined for abandonment in London’s gutters. The identifying tokens on display, left by poverty-stricken mothers in the hope they might, one day, reclaim infants they were forced to give up, are heart-wrenching. A squashed thimble, a button, half a coin, a scrap of faded pink embroidered embroidered with my initials: MD.

From a lifetime of reading, Elizabeth Bennett would be the character I would most like to be. Having been in thrall to Jane Austen’s Darcy since my schooldays – along with the book’s heroine – it would have to be Lizzie. And I wouldn’t object to having her wit and fine eyes, either.

Instagram: maggiedavieswriting
Born not far from Hadrian’s Wall, to a Geordie mother and a Scottish father, I was raised on tales of Highland Clearances and the fate of Montrose. As well as sharing her love of history, my mother – an avid reader – encouraged me to use her adult library ticket for Dickens, Austen and the Brontes. So I grew up with my nose in a book and it seemed a natural progression to write my own stories. I joined a creative writing class and eventually became part of a wonderful writers’ group (ninevoices.wordpress.com) who meet regularly to discuss work in progress. But it was only after retirement brought a relaxation of work and family commitments that I embarked on a novel.
Moved by what I saw, I began to research a world where if you were poor and female – and fell on hard times– you were on your own.
Blog: www.maggiedaviesiswriting.com
Joining me in my Author Spotlight today is Maggie Richell-Davies. She’s chatting about her historical fiction novel The Servant, which was published in 2020.

My journey to publication came through winning the Historical Writers’ Association Unpublished Novel Award in 2020, together with a contract with Sharpe Books. Never underestimate the potential of creative writing competitions to get new writers noticed.

I have been touched by both readers and reviewers expressing a wish to see The Servant brought to life by being turned into a film or television series, so I hope to be forgiven for choosing my own book as the book I’d like to see made into a film. As a teenager I had devoured the escapism of Georgette Heyer, but Jane Eyre and Wuthering Heights told me her frothy stories of balls and muslin gowns were fantasy for women obliged to earn their living. London in the 18th century was a place of vast wealth and privilege, but also of tragedy and want. A world where men had all the power and women had to make the best of it, especially those who happened to be poor. Where often your best chance of a helping hand came from other women as badly off as you were. People like my broken-down Peg, or the gin-swilling and pipe-smoking Nelly, women longer young who have needed every scrap of resilience to survive.
I would love to see Hannah’s story bring women like this to life.
I am currently reading H is for Hawk by Helen Macdonald – a book I gave my husband that he raved about so much that I put it on my own TBR pile. It is the story of how Helen sought to overcome grief at losing her much-loved father by buying a goshawk and trying to train it in the way the medieval lords aristocracy would have done. This is no budgie pecking at a brass bell, no African Grey in an elaborate cage. Here is Mabel, looking out of her box on a Scottish quayside for the first time: “like a griffin from the pages of a bestiary…her beak open, the lucency of her pale round eyes, the waxy yellow skin about her Bakelite black beak…she seems as alien as a snake, a thing hammered of metal and scales and brass.” Moving and beautifully written, this is a suspense story – will Helen succeed – as well as a spiritual journey about love and loss. I won’t forget Mabel in a hurry.

From Charlotte Bronte and Jane Austen we know something of the lives of governesses and have glimpses of women in service: Bessie’s brusque love in Jane Eyre and Mrs Hill’s put-upon housekeeper in Pride & Prejudice. But where are the scrub women and childminders, the innkeepers’ wives and laundresses? Twitter: @maggiedavieswr1
What would be my Desert Island Discs choice? I don’t need Pride & Prejudice or Jane Eyre, because I almost know them by heart. Instead, I would choose what my husband would call a ‘hearty tome’ and reach for Anna Karenina, with its insights into the world of a beautiful Russian lady unhappily married to a dry old stick of a husband.
Being a fan of historical novels, Cecily by Annie Garthwaite has to be my book recommendation to a friend. I already knew that Cecily Neville – granddaughter of John of Gaunt and the mistress who subsequently became his wife, Katherine Swynford – was feisty enough to face down a mob at the gates of Ludlow Castle, with only her small children at her side. But I knew little else, except that she was mother to three famous (or infamous) sons: Edward IV, George Duke of Clarence and Richard III. Annie Garthwaite makes Cecily leap from the page as a real woman. Flawed but ambitious. Duplicitous yet vulnerable. Proof that in a time when men seemed to hold most of the cards, women could find ways to yield influence and power. Medieval ladies were often responsible for vast estates and huge households – similar in complexity, Annie Garthwaite argues, to mid-sized FTSE companies. If that weren’t enough, in addition to supporting their husband’s ambitions, they were expected to breed. Failure at which negated all else. Like some 21st century women, they were expected to do it all.
London’s Foundling Museum is based at 40 Brunswick Square, in Bloomsbury, and is a four-minute walk from Russell Square Tube. It is open 10am to 5pm on weekdays, 10am to 4pm on Sundays, and is a place every woman should visit – preferably armed with a box of tissues.
Much time was spent dithering about my title – The Servant – but in the end simplicity prevailed. The book might be a historical thriller and a love story, but at its heart it is about the often unfair lives of female servants in Georgian London.
Social Media
The Servant is published in paperback and ebook.
You can order a copy here: The Servant
My book therefore became an examination of women like my orphan heroine, Hannah Hubert. Despite being the daughter of a respected Spitalfields silk weaver, she is forced by poverty into servitude. Employed by a dissolute and disgraced aristocrat she finds herself in a house of mysteries, with a locked library and strange auctions being held behind closed doors. But, unknown to her employers, Hannah is educated – and that ability to read and write propels her into the dark underbelly of Georgian London. 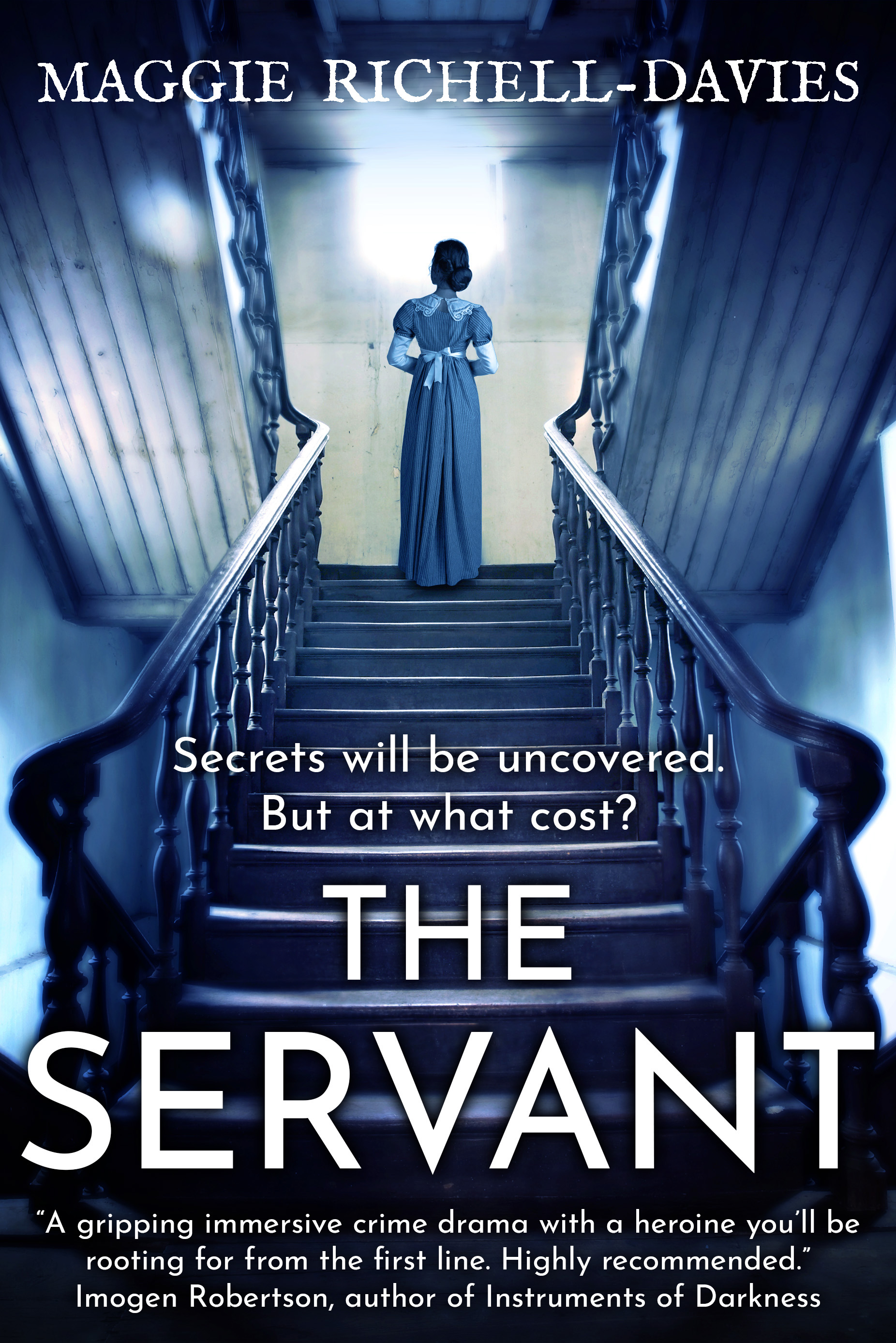