Although I mostly read newly published books, every now and again I choose something not so recent and so I decided to read Tracy Chevalier’s 2016 novel, At The Edge of the Orchard. Actually, having enjoyed the audiobook version of The Last Runaway so much, I decided to listen to this one too. I used the library app Libby which, as I’ve said before, is a fantastic resource allowing you to borrow ebooks and audiobooks if you register using your library card.
From the back of the book
Ohio, 1838. James and Sadie Goodenough have settled in the Black Swamp, planting apple trees to claim the land as their own. Life is harsh in the swamp, and as fever picks off their children, husband and wife take solace in separate comforts. James patiently grows his sweet-tasting ‘eaters’ while Sadie gets drunk on applejack made fresh from ‘spitters’. Their fighting takes its toll on all of the Goodenoughs – a battle that will resonate over the years and across America.
A few years later, we learn about the life chosen by the youngest son Robert. Desperate to leave behind the bad memories of a hard life in the swamp with a fractured family, he travels west working where he can, sometimes a gold miner and then a plant collector for real life character William Lobb. It was fascinating to read about why Victorian plant collectors were in America and what they were looking for, as well as the challenges of getting the plants and trees back to Britain. No easy task when the sea journey could take months.
At The Edge of The Orchard is published by The Borough Press and available in all formats.
About the Author
Fifteen years later their youngest son, Robert, is drifting through Gold Rush California. Haunted by the broken family he fled years earlier, memories stick to him where mud once did. When he finds steady work for a plant collector, peace seems finally to be within reach. But the past is never really past, and one day Robert is forced to confront the brutal reason he left behind everything he loved.
Tracy is the author of 10 novels, including the international bestseller GIRL WITH A PEARL EARRING, which has sold over 5 million copies and been made into an Oscar-nominated film starring Scarlett Johansson and Colin Firth. American by birth, British by geography, she lives in London with her husband and son. Her latest novel, A SINGLE THREAD, is set in and around Winchester Cathedral in the 1930s, and involves embroidery, bellringing, and an adventurous heroine. Her website http://www.tchevalier.com will tell you more about her and her books.
Liza Ross brought all the characters to life with her excellent narration and it was easy to follow which character was speaking with the distinct voices she gave to them. Her accent gave real authenticity to the characters and was very pleasant to listen to.
What happens when you can’t run any further from your past?
At The Edge of the Orchard is a richly detailed novel and as with all the Tracy Chevalier novels I’ve read, it’s beautifully written with characters who felt very true to life. There’s darkness in the story with the troubles of the swamp, the behaviour of James and Sadie and the hard times faced by the Goodenoughs. But there is also light in the character of Robert as he strikes out on his own, with his sense of decency and honour. At The Edge of the Orchard is captivating historical fiction.
In this rich, powerful story, Tracy Chevalier is at her imaginative best, bringing to life the urge to wrestle with our roots, however deep and tangled they may be.
Tracy Chevalier is just brilliant at bringing different eras to life in her fiction and she did so again in this book set in the first half of the 19th century in America. The challenges and realities of trying to make a life and a living in the swamp areas of Ohio were clear. It was a harsh place to live with difficult growing conditions, particularly for James Goodenough’s beloved apple trees, the damp and hot climate brought mosquitos to torment the family and they inevitably brought disease and loss to the Goodenoughs. 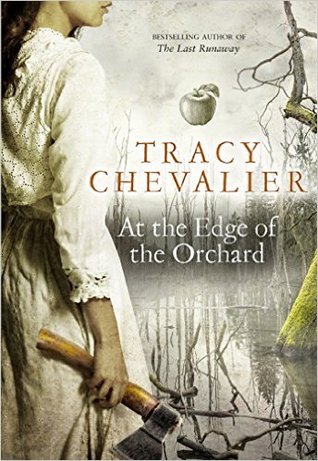