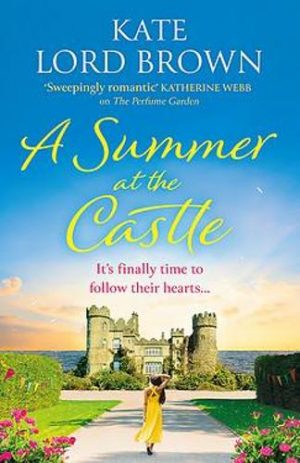 Every summer, Diana Hughes organises a famous baking competition at her beautiful castle in the south west of Ireland, to raise funds for its upkeep. But this year, amongst the bunting and scrumptious cakes, everything is turning out a little differently than planned!
Brillat-Savarin reckoned there were six senses at play with food: taste, touch, hearing, sight, smell – and desire. On that we agree – food is desire. For me, as a kid with a working mother and no Dad, breakfast was a DIY affair. I envied a friend whose mammy made a loaf of soda bread each day for her family without fail. Sleeping over at their house, I’d wake to the smell of fresh baking, and breakfast would be a glass of warm, unpasteurised milk straight from the cow (they were a dairy-farming family), and a slice of bread with salted butter. Oh, God, I loved it. That smell, that simple food was like an embrace, and I leant in to it the way a flower does towards the sun. I desired their life. Her ma was a big hugger, too, unlike mine, which helped. We’re creatures of habit. We all just want to go home. Bake that bread.
Kate grew up in a wild and beautiful part of Devon, and was first published while at school. After reading Philosophy at Durham University, and Art History at the Courtauld Institute, she worked as an international art consultant, curating collections for palaces and embassies, and she was elected a Fellow of the Royal Society of Arts. In 2000 Kate and her husband left their careers and home in London behind to follow the dreams of a lifetime – they travelled round the world and relocated to Valencia, Spain; there he learnt to fly, retraining as a pilot and Kate began to write full time.
Interspersed with the story are ‘articles’ and recipes by Diana, her daughter Darcy and celebrity rock and roll chef Conor (yes, I read a lot of Marco Pierre White too!). This is one of my favourite recipes in the book – so simple but really heart-warming. Enjoy!
Previously published as ‘The Taste of Summer’ Darcy Hughes, Appetite Tumblr

THE INSPIRATION FOR “A SUMMER AT THE CASTLE”

After many years living overseas, Kate has recently returned to the south-west where she lives on Exmoor with her family and a menagerie of animals rescued in the Middle East.
What do your kitchen cupboards say about you? That old guy, Brillat-Savarin, said: ‘Tell me what you eat and I’ll tell you who you are.’ He had it wrong. It’s not just what we eat that shows who we are, it’s what we buy but don’t eat that says more about the people we think we are. Or want to be. Look at the ingredients in your cupboards. All those hopes and dreams.

BY KATE LORD BROWN
Soda bread
My thanks to Kate Lord Brown for the invitation to take part and for providing the post.
Mix 450g plain sifted flour, 1 tsp salt, 1 tsp bicarbonate of soda and make a well in the centre. Gradually pour in 400 ml buttermilk and mix. Turn the dough out onto a floured board, and make it round. Cut a cross on top. Bake for 45 minutes at 180°C until the loaf is golden brown.
A recipe for disaster…
BREAKING BREAD
Kate gained a MA in creative writing from the Manchester Writing School. Her novels have been translated into many languages, and have been top ten bestsellers in the US/Canada, UK, Germany, Norway and Spain. Kate wrote the first book club column in the Middle East for two years, and has published journalism for the Daily Telegraph, Good Housekeeping and Conde Nast Traveller on everything from writing and expat life, to Arab horses, perfume and Japanese festivals.
Ever since staying at Dromquinna in south west Ireland twenty years ago, I’ve wanted to set a book there. It was unforgettable, exploring Kerry and Dingle – going out on the boat with Fungi the dolphin, driving through the beautiful Macgillykuddy’s Reeks, and then coming home at the end of the day to warm log fires and hearty local cooking at the manor. Inspired by this, I invented Diana’s beautiful Castle, and set her TV show there.First, her daughter Darcy arrives on the doorstep unexpectedly, after running away to the sunny hills of California with a broken heart a year ago. Then a mysterious stranger tries to sabotage the competition. Diana and Darcy soon find out that the past is quickly catching up with them – and it’s about to turn their lives upside down!…

Scandal, secrets and strawberries.
Publisher: Orion
Format: Ebook, Audio, Paperback (24 June 2021)
Page Count: 352
Food has always played a big part in family life – my mother trained as a cordon bleu chef. I am an enthusiastic amateur, and love reading cookbooks. The research was fabulous – I read M F K Fisher, the Ballymaloe cookbooks, and all of Elizabeth David. I loved her character so much I wrote a cameo for her in the historical strand of the book. I also read John Lanchester’s ‘The Debt to Pleasure’ and that chimed with a conversation I had with the psychiatrist Steve Peters at a literary festival about his work with sociopaths. I liked the idea of a darker strand to the story, exploring celebrity and obsession. Let’s just say it’s not all cupcakes …